Turkey, Russia, Iran pledge to speed up efforts to ensure calm in Syria 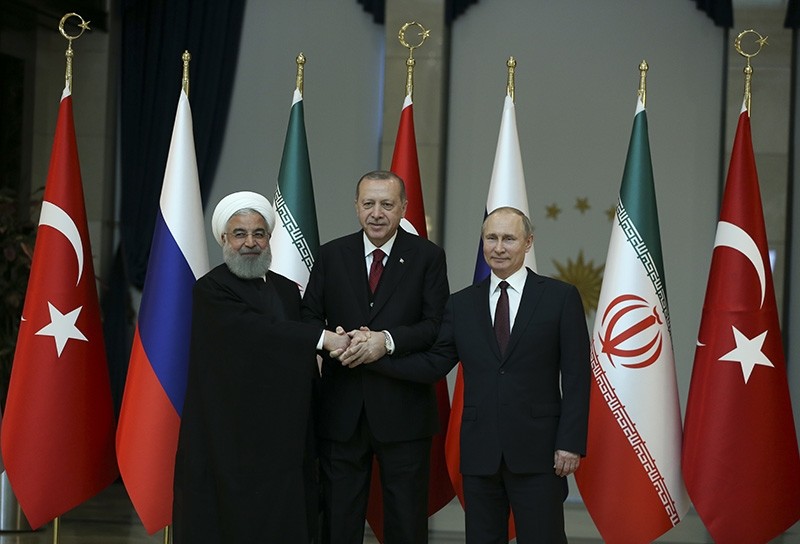 Turkey, Iran, Russia said they are determined to "speed up their efforts to ensure calm on the ground" in Syria and protect civilians in "de-escalation zones," a joint statement posted after the trilateral meeting said Wednesday.

In the joint news conference after the meeting, President Recep Tayyip Erdoğan said that Turkey is aware of its responsibilities in Syria and fulfills them with utmost care.

"Turkey secured and cleared of terrorists a 4,000-square meter area in Syria during operations Euphrates Shield and Olive Branch," he said.

The president noted that adopting an equal distance from all terrorist groups is crucial for maintaining Syria's territorial integrity, adding: "It is very important to exclude all terror groups threatening not only Syria, but all surrounding countries, primarily Turkey, and the region as a whole," while he highlighted that it is crucial for all actors to acknowledge that Daesh and PKK-linked People's Protection Units (YPG) terrorists serve the same purpose and cannot contribute to lasting peace in the wartorn country.

Meanwhile, Iranian President Hassan Rouhani said that his country believes the Syrian crisis has no military solution, adding that safeguarding the independence of Syria is a priority for Tehran.

Russian President Vladimir Putin, on the other hand, said that it is crucial to avoid politicizing the humanitarian aid issue in Syria.