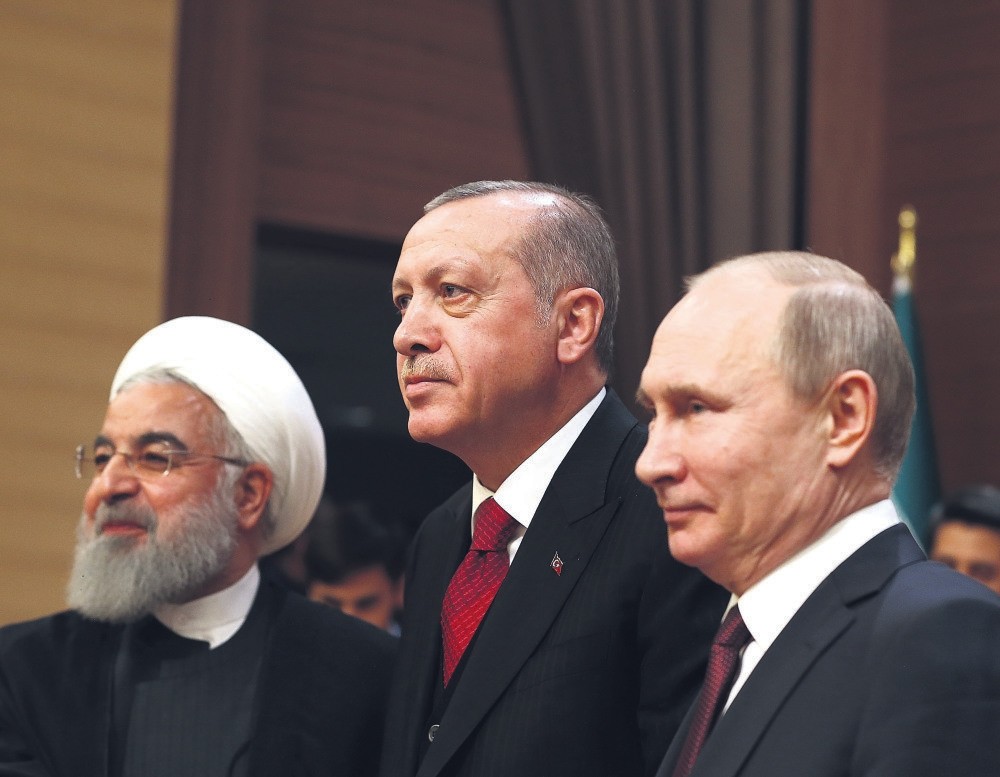 The Turkish, Russian and Iranian leaders said the aim of their joint efforts is to establish peace in Syria and maintain the country's territorial integrity, while vowing to continue the fight against all terrorist groups

The leaders of Turkey, Russia, and Iran announced on Wednesday at a summit that the aim of their trilateral effort is "to rebuild a Syria where peace will prevail" and called on the international community to support a political solution in the country. The trio, working as part of the Astana peace process for Syria, met in Ankara, while the U.S., another actor in the conflict, has been elbowed out. "With the trilateral summit, our aim is to rebuild and revive a Syria in which peace will prevail," President Recep Tayyip Erdoğan said at a joint press conference after the three leaders met for an hour-and-a-half at the Presidential Complex.

The meeting in Ankara marks the second meeting held after the Sochi summit, backed by Turkey, Russia, and Iran, held on Jan. 29-30, as part of the peace process launched in Astana, Kazakhstan. The Astana peace process is a complement to the U.N.-brokered talks in Geneva to bring an end to the civil war in the country. Leaders and officials from Turkey, Russia and Iran held a series of summits in Sochi to bring together the conflicting parties in Syria, including the moderate opposition and the Syrian regime, excluding groups listed as terrorists by the three countries. A proposal to form a constitutional committee was agreed to by the representatives from the Syrian regime and guarantors Russia, Iran and Turkey.

The parties to the Astana talks say it is a complimentary effort to the U.N. brokered Geneva talks, not as a replacement. However, the parties argue that the weakness of U.N. efforts has led to searches for alternatives.

Erdoğan said the leaders at the summit took a stance rejecting "new realities put forward under the pretext of fight against terrorism."

For Turkey's position, he said the fight against all kinds of terrorism will continue in Syria, as "Turkey will not be at peace until Syria is at peace."

Russian President Vladimir Putin and Iranian President Hassan Rouhani arrived in Ankara on Tuesday and held separate meetings with Erdoğan ahead of the summit.

"Turkey will not stop until all regions under PYD [Democratic Union Party] control, including Manbij, are secured. We will never allow either Syria or our region to be attacked by a few terrorist groups," Erdoğan added.

He said that Turkey does not see a difference between terrorist groups, namely the PKK and its Syrian affiliate PYD and its People's Protection Units (YPG) militia, or Daesh.

While Turkey, Iran, and Russia have made diplomatic efforts to reach a common stance on Syria's future, the U.S. has not been included.

The U.S. has supported the YPG, which functions under Syrian Democratic Forces (SDF), in its fight against Daesh in Syria. Washington's vast military and political support to the YPG has severely strained ties with Ankara, bringing relations between the two NATO allies to historic lows.

"Those who don't understand that Daesh and the PYD and YPG serve the same purpose cannot contribute to lasting peace in Syria. Turkey is ready to begin efforts with the Russians and Iranians in Tal Rifaat for a habitable environment for Syrians," he said.

Erdoğan added that the territorial integrity of Syria depends on elimination of all terror groups. "Turkey will not stop until all regions under the PYD and PKK's control, including Manbij, are secured," he said at the press conference.

After Erdoğan's remarks, Rouhani also underlined that "partial cease-fire was agreed upon in Astana as part of anti-terror fight," and continued by adding, "The fight against terrorism should continue – all terrorist groups should withdraw from Syria." Rouhani called on the international community to respect and recognize Syria's territorial integrity.

The Iranian leader added that from his country's perspective, the crisis in Syria cannot be solved with a military solution.

U.S. inconsistency drives it out of process

The trilateral effort, although having some disagreements over Syria's future, has been able to reach a partial cease-fire in Syria. The U.S. however, has been sidelined in the talks, despite being a major player in the field, as it is also present militarily in Syria. Iran and Russia are the main backers of the regime, while Turkey supports the Free Syrian Army (FSA), formed of moderate opposition forces. The U.S.'s insistence on partnership with the People's Protection Units (YPG), despite security concerns raised by Washington's NATO ally in the region, have made Ankara seek a solution with Tehran and Moscow.

"The U.S. should have come to an understanding that a decision cannot be made in this region without Turkey and Russia," said Mesut Hakkı Caşın, a professor and head of International Relations Department at İstinye University in Istanbul.

The U.S. supports the YPG, which Turkey sees as the Syrian affiliate of the PKK, a group listed as a terrorist organization by the U.S., the EU and Turkey. Caşın said that where Washington ignored Turkey's security concerns, Moscow was able to find common ground with Ankara. "Of course, these are all results of Turkey's successful Operation Euphrates Shield in northern Syria against Daesh and Operation Olive Branch in Afrin against the YPG in Syria, which strengthen Ankara's position on Syria," Caşın added.

Caşın, who is also a military expert, said Turkey's military strength, combined with continuing diplomatic efforts, has made it an influential player in regional matters, which is reflected on the field, with Iran and Russia.Historically, conflicts in the Middle East have had Western players as mediators for a solution. However, Turkey's rising influence in the region and the West's negligence of Turkey's security concerns have also made Turkey merge with regional powers and find a solution to the crisis in the region. Last year, a similar merging took place when the Kurdistan Regional Government (KRG) decided to hold a secession referendum in Iraq. Then, Ankara had also joined efforts to overcome the crisis with Baghdad and Tehran, also sidelining Washington, which also opposed the KRG's independence aims.

"Some global powers, begging with the U.S., have a desire to keep terror groups like Daesh and al-Nusra in our region, so that they can be used as their tools," Iranian President Hassan Rouhani said during yesterday's press conference. "With the help of regional countries, Iraq and Syria have overcome such danger," Rouhani added.