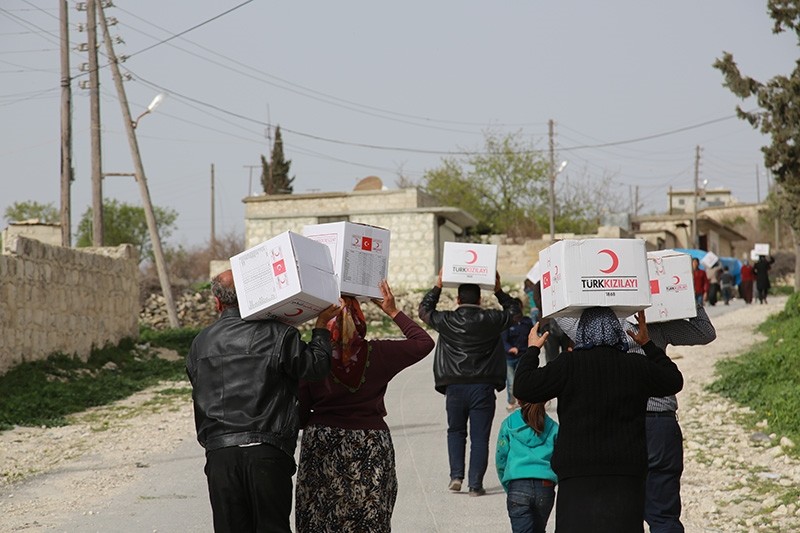 Turkey's counter-terror operation in northern Syria aims to correct the mistakes of the U.S., while the latter's act of arming the PKK and People's Protection Units (YPG) terrorists in Syria is a "point of discord" between Ankara and Washington, Foreign Minister Mevlüt Çavuşoğlu said.

"A point of discord with with the United States is its policy of arming the PKK and YPG to act as foot soldiers, even as they have a history of terrorism," Çavuşoğlu wrote in an article -- titled The Meaning of Operation Olive Branch -- for the American news magazine Foreign Policy published on April 5.

Çavuşoğlu said the arming of the terrorists is a "legally and morally questionable policy" that was prepared by the Obama administration in its waning days and "somehow crept into the Trump administration."

Turkish-U.S. relations have suffered due to the YPG, since Obama's presidency, during which U.S. military support to the YPG began. Current President Donald Trump has followed suit in Syria by arming the YPG, a stance Ankara had hoped would change with the new administration.

The YPG's ultimate aim is to establish an autonomous region in northern Syria by connecting the PYD's northwestern Afrin canton to the Kobani and Jazeera cantons in the northeast, which Ankara considers to be a "terror corridor." As a result of the U.S.'s broken promises, Turkey also shifted its position and vowed to clear all terrorists from northern Syria, including Manbij and areas east of the Euphrates.

Çavuşoğlu said the U.S. has "played into the hands of all its critics and opponents by deciding to form an alliance with terrorists despite its own values and its 66-year-old alliance with one of their primary targets, Turkey."

He said that he is pleased to see that many NATO allies did not follow the U.S. policy.

"I hope that my designated counterpart, incoming Secretary of State Mike Pompeo, and National Security adviser John Bolton would see it a priority to correct the course," he said.

The foreign minister said that the "gloomy portrait of the Middle East should not obscure that peace is achievable."

"The basic premise for any such peace must be to preserve the territorial integrity of states. This means countering all forces that exist only to pursue their dystopias at the expense of others and with the help of outsiders, including Daesh, PKK and People's Protection Units (YPG) terrorists," he said.

About Daesh, Çavuşoğlu said that the terrorist organization has largely been defeated militarily.

"That's not only because groups trained and armed by the United States dealt it a final blow. They were defeated due to the dedicated work of the Iraqi Army and a global coalition operating from Turkey," he said.

The foreign minister said that the "weaknesses of Daesh were most clearly exposed after Turkey became the only NATO army to directly engage -- and unsurprisingly crush -- it in Jarablous in northern Syria."

Çavuşoğlu said that the regrouping of the terrorist organization is prevented by the coalition -- which includes Turkey.

"The fight against terrorism must continue with full vigor but with greater emphasis on timely intelligence gathering, financial measures, and anti-recruitment and radicalization measures," he said.

"Their difficulties in turn provide an excuse and opportunity for all sorts of interventions by all sorts of countries and non-state actors. The result isn't just a bloodbath but massive migration and terrorist pressure against Turkey and the rest of Europe, which is at its doorstep," he said.

The minister suggested that the resilient nation states must form the basis of stability in the Middle East. "The vision of Bashar al-Assad will eventually lose, but a united Syria must ultimately win the long war."

Çavuşoğlu said that the ongoing operation in Afrin "is above all an act of self-defense against a buildup of terrorists who have already proved aggressive against our population centers."

On Jan. 20, Turkey launched Operation Olive Branch to clear terrorist groups from Afrin amid growing threats from the region.

"The massive PKK and YPG terrorist encampments across our borders served a double purpose. One was to open a supplementary front for PKK terrorist operations, in addition to the one in northern Iraq and unite them to form a continuous terrorist belt," he noted.

Çavuşoğlu said that the weapons and military infrastructure which were seized during the operation in Afrin proved Turkey's assessment.

"The second purpose of the terrorists' encampments was to form territorial beach-heads for their own statelet to be built upon the carcasses of Syria and Iraq on the areas vacated by Daesh," he said.

"We should also resist any framing that portrays Olive Branch as a fight of Kurds against the Turks. It should be obvious that the PKK and YPG terrorists do not represent the Kurds," he said.

The minister said that the YPG has expelled some 400,000 Kurds from the territory it seized in Syria.

"Turkey wants all Kurds to live in peace and prosperity in all the countries they straddle. The PKK's micronationalism and terrorism are a disservice to everyone including the Kurds," he said.

Çavuşoğlu also stressed the importance of the development in the Middle East.

"The Middle East must be kept safe from the threat of sectarianism, spheres of influence, resurgent imperialisms, royal family feuds and extremism of all sorts, religious and otherwise," he said.

"The states and peoples of the region -- and those affected by it -- have suffered enough. A road map toward such a successful future may already be emerging, with Turkey's resolute leadership. I hope the United States chooses to seize the moment and support that vision of peace," the minister added.