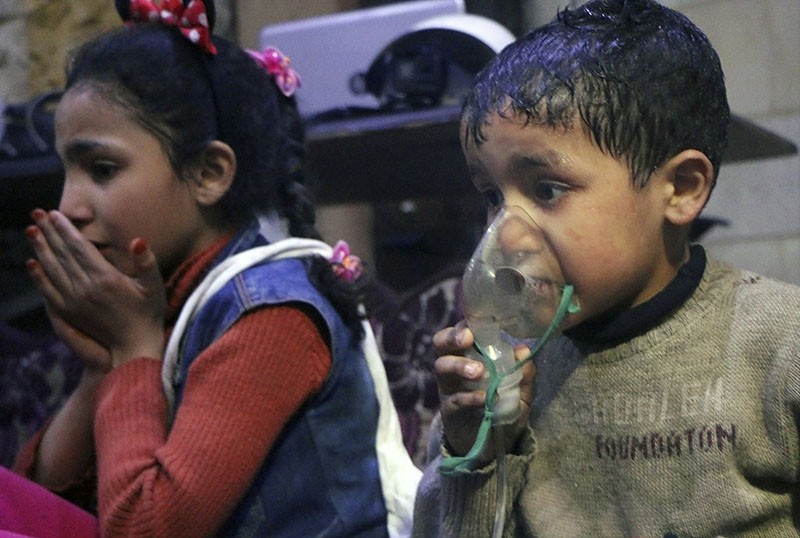 This image released early Sunday, April 8, 2018 by the Syrian Civil Defense White Helmets, shows a child receiving oxygen through respirators following an alleged poison gas attack in the town of Douma, near Damascus, Syria. (White Helmets via AP)
by Daily Sabah with AA Apr 08, 2018 12:00 am

Turkey's Ministry of Foreign Affairs released a statement Sunday strongly condemning the chemical attack in Syrian town of Douma late Saturday and urging the international community to quickly launch a probe to find the perpetrators.

Assad regime forces dropped a barrel bomb containing poisonous chemicals on civilians in the Damascus suburb of eastern Ghouta late Saturday, killing at least 70 and injuring more than 500 people, according to reports from the ground.

"We strongly condemn the attack that bears strong suspicions that was carried out by the regime, whose record in use of chemicals weapons is known by the international community," the statement said, pointing to the Assad regime as its perpetrator.

The statement added that this incident shows that U.N. Security Council resolutions on chemical weapons use on Syria numbered 2118, 2209 and 2235 were once again ignored.

"We expect the international community to show its reaction in the face on the attack and international organizations, including the Organization for the Prohibition of Chemical Weapons (OPCW) to immediately investigate this case," the ministry said.

The statement called on to the parties that have influence over the Syrian regime to urgently fulfill their responsibility to prevent these brutal attacks that constitute crimes against humanity, indiscriminately target civilians and were repeated as no measures were taken after previous attacks.

President Recep Tayyip Erdoğan on Sunday called on the West to pay attention to children, women and civilians being killed in eastern Ghouta.

"When will you [the West] turn around and look at the children, women and humans slaughtered and martyred in eastern Ghouta so we can say 'they act fair'?," Erdoğan said at the ruling Justice and Development Party's (AK Party) ordinary provincial congress in southeastern Siirt province.

"Shame on those who turn humanitarian tragedy in our region into their internal political accounts and their own benefits. Your democracy, human rights, your understanding of diplomacy is a shame," he said.

In a written statement on Sunday, Deputy Secretary General of Presidency and Spokesperson İbrahim Kalın stated that Syrian regime should be held accountable for repeated chemical attacks in Syria.