Turkey, Russia, Iran determined to retain alliance at all costs 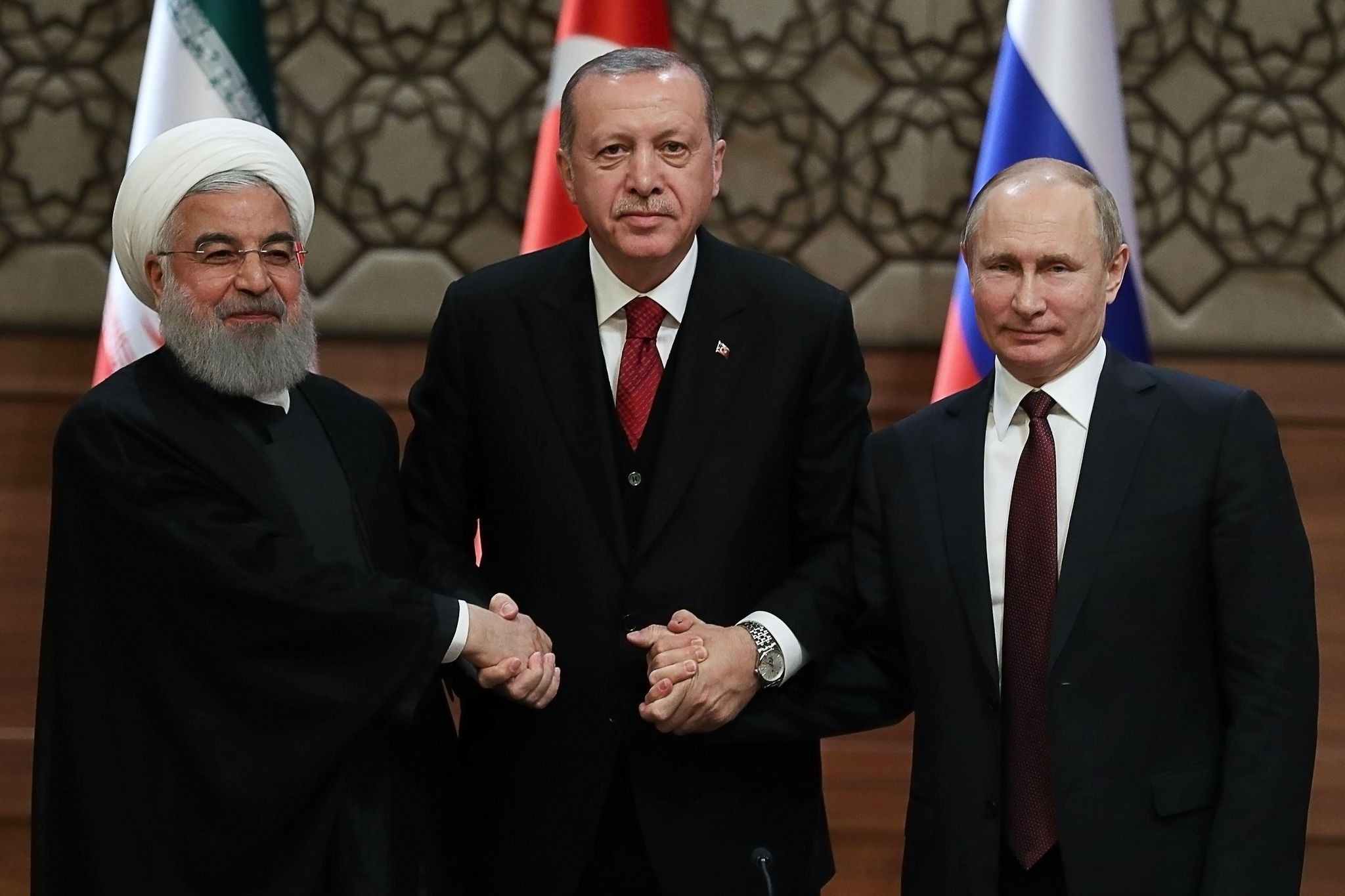 Turkish diplomatic sources said the diplomats, intelligence officers and militaries of Ankara, Moscow and Tehran will keep dialogue channels open and work around the clock until the next trilateral summit is held in Tehran in the upcoming months

When the Turkish, Russian and Iranian presidents gathered last week in the Turkish capital city of Ankara, a photo sent a bold statement to the whole world. Recep Tayyip Erdoğan, Vladimir Putin and Hassan Rouhani were hand in hand as they vowed to preserve Syria's territorial integrity and achieve a political solution.

The trilateral unity was interpreted as the era of new decision-makers in Syria. Indeed, the three countries seem poised to moving the alliance forward at any cost. According to sources in Ankara, the positive mood at last week's summit surpassed the previous one in Sochi even though the sides had differences of opinion on several issues.

In fact, Ankara, Moscow and Tehran do not shy away from expressing their discontent with some of their actions on the ground in Syria. Tehran, for example, has expressed once again at the last week's summit that Ankara should hand over Afrin to the Bashar Assad regime, which was liberated from the PKK's Syrian affiliate People's Protection Units (YPG) on March 18, Turkish sources familiar with the meeting said.

The Bashar Assad regime, however, remains a red line for the Turkish government. In line with this stance, Ankara refused Tehran's suggestion. Yet, the issue did not lead to any serious friction between the two sides. Russia, on the other hand, has not caused Turkey a troubling headache since the start of Operation Olive Branch in this respect.

In the same way, the vehement support of Russia and Iran to the Assad regime does not prevent Turkey from forging even closer ties with the two countries. The joint photo session indeed points it out. In spite of divergences, the trio puts forward a common action plan in Syria for most issues if not all.

Ankara, Moscow and Tehran believe that they have come a very long way in building up a process, the sources said. Bearing this understanding in mind, the diplomats, intelligence officers and militaries of the three countries will keep dialogue channels open and work around the clock until the next trilateral summit in Tehran in the upcoming months.

"With the trilateral summit, our aim is to rebuild and revive a Syria in which peace will prevail," President Recep Tayyip Erdoğan said at the joint press conference. "Turkey, Iran and Russia support Syria's territorial integrity," Putin said and Rouhani underlined the anti-terrorism fight in his remarks, saying: "The fight against terrorism should continue – all terrorist groups should withdraw from Syria."

Another crucial aspect of the growing cooperation between the countries is the message sent to the United States. At a time when the U.S. president and the Pentagon contradict each other on the same day and are not even aware of how the country will act in Syria, the resolute trilateral pact takes decisive steps on the future of the country while Washington watches the events from afar.

The sources say Ankara, Moscow and Tehran will remain unfaltering in not letting Washington spoil their extensive collaboration.

The history of the trilateral cooperation actually dates back to the Turkish-Russian rapprochement in December 2016, when the two countries mediated the Aleppo evacuation process. After that, with the inclusion of Iran, the three countries initiated the Astana process. It was a Syrian peace process, which aimed to complement the U.N.-brokered talks in Geneva, to bring an end to the seven-year conflict in the country.

Within this framework, Turkey, Iran and Russia agreed in Astana to establish de-escalation zones in the northern province of Idlib and parts of neighboring Latakia, Hama and Aleppo. Under the Astana agreement, Turkey is to gradually establish 12 observation points from Idlib's north to south to monitor and sustain the current cease-fire agreement for the de-escalation zones, deliver humanitarian aid and ensure the secure return of displaced people.

Furthermore, the trio initiated another breakthrough for a political transition period in Syria with the Syrian National Dialogue Congress in Sochi in January. At the congress, Turkey represented the Syrian opposition at their request. U.N. Special Envoy for Syria Staffan de Mistura also attended the summit.

The Sochi congress was aimed at bringing the warring sides together to find an ultimate solution to the crisis. In relation to the issue, President Recep Tayyip Erdoğan previously stressed that in this respect a new Syria would be born at the summit.

Even though a concrete solution has not emerged yet from the trilateral summits and the countrywide cease-fire, Ankara, Moscow and Tehran believe that they have come a very long way in building up a process, the sources said. Bearing in mind this understanding, the diplomats, intelligence officers and armed forces of the three countries will keep dialogue channels open and work around the clock until the next trilateral summit is held in Tehran in the upcoming months.