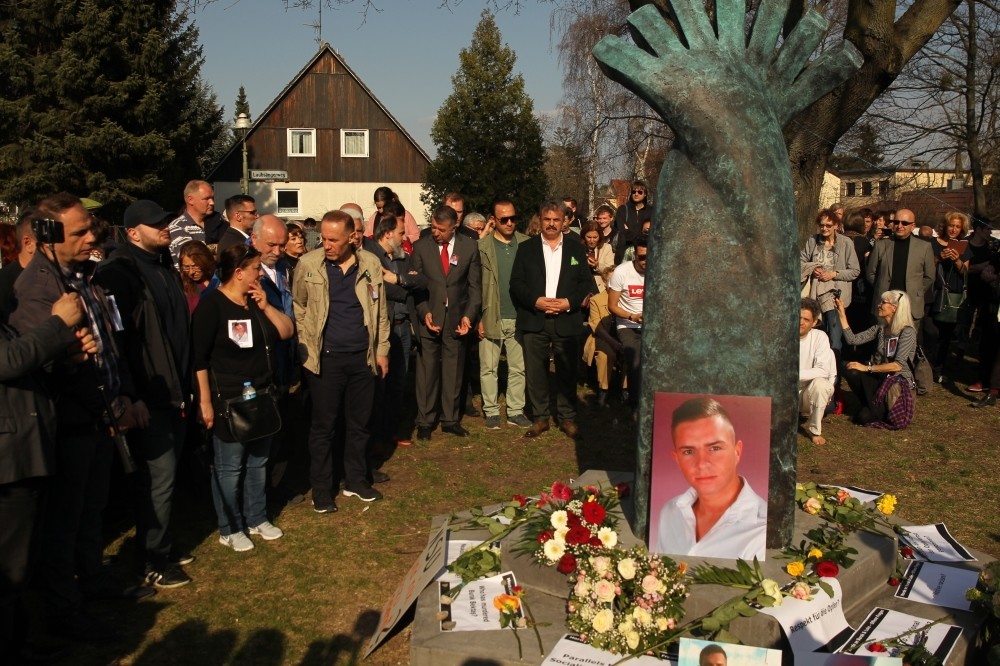 Burak Bektau015f is a victim of an unsolved murder. He was commemorated in a park at the junction of Rudower and Mu00f6wenweg Streets in the Neuku00f6lln district, Berlin, April 08.
by Daily Sabah Apr 10, 2018 12:00 am

Turkish-Germans have faced a number of cases of discrimination and violence recently, showing that anti-Turkish sentiment in the country is on the rise

Germany's anti-Turkey stance revealed itself once again during several incidents that took place on different levels over the weekend, as the number of discriminatory and violent acts toward Turkish people increased recently throughout the country. Yusuf Ünsal, a Turk in Germany, was forced to the ground and arrested by German police officers while he was protesting against a demonstration on Sunday by PKK terrorist group sympathizers in the city of Stuttgart. The terrorist group sympathizers were holding anti-Turkey and anti-Erdoğan banners and chanting slogans. The incident was captured on video by another Turkish citizen.

President Recep Tayyip Erdoğan on Sunday called a Turkish citizen living in Germany who had been treated poorly by police and extended his get-well wishes. Erdoğan also received details of the incident from Ünsal during their conversation, a statement from the presidential office said.

The PKK is listed as a terrorist group by the EU, Turkey, and the United States. However, the European countries have mostly turned a blind eye to the actions of PKK followers in their cities, despite the group being listed as an outlawed organization.

Speaking at an investment-related event in Ankara, Yıldırım said: "I strongly condemn the German police for using violence not on terrorists but on a [Turkish] citizen who was protesting against [pro-PKK] terrorists."

Over the weekend, PKK supporters in Hessen County's Darmstadt city attacked two stores and a mosque that belong to Turks. The PKK sympathizers attacked to the Hilal travel agency on Saturday, and Tuana restaurant and Emir Sultan Mosque on Sunday. They broke the windows of the places and wrote political slogans to the walls. No one get hurt during the attacks.

Speaking to AA, the head of foreigners' council of Darmstadt Ümit Cengiz condemned the attacks by saying that their lives are not secured in there anymore. "The fact that the ones who are responsible from the attacks cannot be found encourages others to act in a similar way," said Cengiz while adding that the attacks started three weeks ago.

Elsewhere, a Turkish patient complaining about poor hygiene in a hospital room faced discrimination from the head physician of the hospital on April 5.

Ufuk Altunok, 18, who has an intestinal disease and gets a treatment at the Theresienkrankenhaus hospital in Mannheim, Germany, reportedly faced discrimination following his demand to change rooms due to his hygiene concerns.

"Go to Turkey then, Erdoğan would take care of you," the head physician of the hospital, Daniel Schmitz, allegedly told the young man and his family in response to their demand.

"I asked for the doctor to help us, saying that my son does not want to stay in that room. As a response, he said go to Turkey, Erdoğan would take care of you. Then I said that we are also German citizens who live in Germany and warned him to not get political," Ufuk's father Niyazi Altunok said.

"Then, he said that he does not want to see us anymore and asked us to leave the hospital while he held my son's arm and squeezed it.

"Following this incident, we had an argument," he said, adding that the verbal insults from the doctor continued even when they were about to leave the hospital. Both the hospital and Altunok family called the police. However, when he was informed about the incident, the police told Altunok that the hospital is not a hotel, and defended the doctor.

"The police tried to make my son sign a paper stating that he left the hospital on his own accord. But, we did not sign it," Niyazi Altunok said. He added add that they informed both the Foreign Ministry and the Turkish Embassy in Berlin of the incident, both of which said they will investigate the incident.

A memorial for a Turkish victim of a presumed hate crime murder was also unveiled Sunday in Berlin, six years after the incident.

Burak Bektaş was shot on April 5, 2012. His murder remains unresolved, according to local police.

Bektaş's parents opened the memorial in a park at the junction of Rudower and Möwenweg Streets in the Neukölln district. Mustafa Çelik, Turkey's consul general to Berlin, attended the ceremony.

"In every meeting we hold, we demand our German colleagues and law enforcement put more effort into this and resolve the attacks carried out especially by right-wing extremists," Çelik told Anadolu Agency (AA).

"I do not trust [German law enforcement officials]. I don't trust the prosecutors and police anymore," Bektaş's mother, Melek, said. "They are trying to cover the incident up."

Çelik said the landscaping of the park was done by a Turkish company and thanked all the Germans who supported and contributed to the memorial's construction. He added that he believes the memorial is significant because it will create awareness.

Forty-thousand euros were raised for the memorial led by an initiative dedicated to solving the murder.

Hundreds of people joined a demonstration held before the opening of the memorial.

Bektaş, 22, was shot in the Neukölln district while chatting with friends. Two of his friends were also seriously injured in the attack.

Eyewitnesses had reported that the assailant, who was white and middle-aged, quietly left the scene after firing on the young men. German police claimed that no evidence leading to the perpetrator could be found.