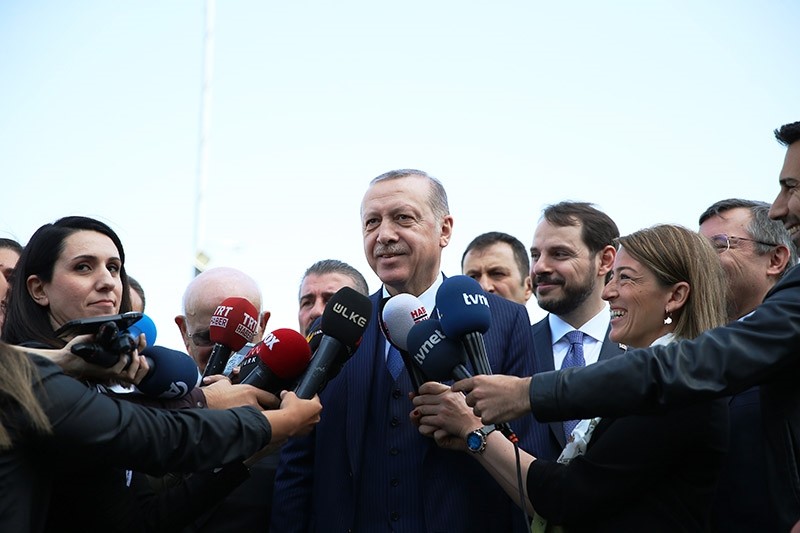 The recent tensions between the United States and Russia in Syria, which has brought the two superpowers to the brink of military confrontation, seems to be calming down, President Recep Tayyip Erdoğan said on Friday, as Ankara continues to carry out backdoor and phone diplomacy with both Washington and Moscow.

"The developments in Douma, after what happened in Eastern Ghouta, were heartbreaking," Erdoğan told reporters in Istanbul, adding that he discussed the chemical attack on civilians in Syria by regime forces with both U.S. President Donald Trump and Russian President Vladimir Putin over the phone during the week. Erdoğan said that he discussed the issue in detail with Trump and gave video footage of the attack to a special envoy sent by Putin. On April 7, the Eastern Ghouta and Douma districts were hit by a chemical attack in which dozens of civilians died and many more were affected. After the attack, Trump vowed to strike Syrian regime positions. Regime forces are strongly supported by the Russian military as well as forces loyal to Iran. The United Nations Security Council (UNSC) unanimously adopted a resolution on Feb. 24, calling for a month-long cease-fire in Syria, including Eastern Ghouta, to allow the delivery of humanitarian aid.

Despite the resolution, the regime and its allies earlier this month launched a major ground offensive backed by Russian air power to capture opposition-held parts of Eastern Ghouta.

Infamous for his controversial tweets, Trump on Wednesday warned Russia on Twitter to brace for U.S. military engagement in Syria. He tweeted: "Get ready Russia, because they will be coming, nice and new and 'smart!' You shouldn't be partners with a Gas Killing Animal who kills his people and enjoys it!" On Thursday, Trump seemed to step back from his earlier tweet, saying that he "[n]ever said when an attack on Syria would take place. Could be very soon or not so soon at all!" U.S. officials said later on Thursday that Trump has yet to decide on whether he will pursue military action in Syria.

On Thursday, the UNSC was called to hold an emergency session amid tensions over the Douma attack. The meeting meant to address the possibility of U.S. military action in response to the Syrian regime's alleged use of chemical weapons.

Erdoğan added that during his conversations with the leaders of the two historic rivals, sensitivity to the use of chemical weapons has been demanded from the anti-Daesh coalition and Russia, and Ankara will continue this demand. "The latest developments show that tensions have relatively calmed down. Our meetings are underway and they will continue," Erdoğan said.

Russian Defense Committee of the State Duma Chairman Vladimir Shamanov also said late Wednesday that Turkey had served as a mediator between the U.S. and Russia in the Douma chemical attack crisis. "A dialogue between the chiefs of staff of the U.S. and Russia has begun. The connection has been made possible through our counterparts in Turkey," Shamanov said on a talk show on the national Rossiya 1 TV channel.

Ankara has played as an influential role in several recent crises in its region, including the row between a Saudi-led axis against Qatar in the Gulf, as well as the U.S. decision to relocate its embassy in Israel from Tel Aviv to Jerusalem, which caused a major uproar in the Muslim world. Turkish leadership argues that tensions between states in the region ultimately affect the whole region and should be avoided or solved through regional diplomatic mechanisms.

Ankara says that both the U.S. and Russia follow wrong strategies in Syria, as Washington supports the PKK's Syrian affiliate People's Protection Units (YPG) in the fight against Daesh and Moscow supports Bashar Assad, whose regime has killed of hundreds of thousands of its people.

Erdoğan said that while there is a special focus on and sensitivity to chemical weapons used in Syria, as they are banned by international law, the killings of civilians with conventional weapons should also not be ignored.

Prime Minister Binali Yıldırım also commented on the alleged chemical attack on Friday, saying the U.S. and Russia should avoid steps that would complicate an already volatile situation in Syria.

"The region has already been paying a great price for the civil war and migration. We advise our friends to steer clear of initiatives that would make things even more complicated," Yıldırım told reporters in Ankara. "The use of chemical weapons, the murder of innocent people, children, will never be forgivable, it is shameful," he added.

As a result of the nearly eight-year war in its neighbor, nearly 4 million Syrian refugees have sought safety in Turkey, making the humanitarian issue a great economic and security burden for Ankara.

While the Turkish government has followed an open-door policy for incoming Syrians, it argues that a political solution should prevail with Assad out of the picture and refugees should be able to return to their homes. The escalation of tensions is also expected to bring a new refugee influx to Europe. President Erdoğan has argued that Turkey is the only country that wants stability in the region and is clearing it of terrorism. Erdoğan says that clearing terrorist elements would enable the safe return of Syrians to their homes, and will enable the reconstruction of Syria as well.