Turkey seeks peace, Macron in search of heroism in Syria 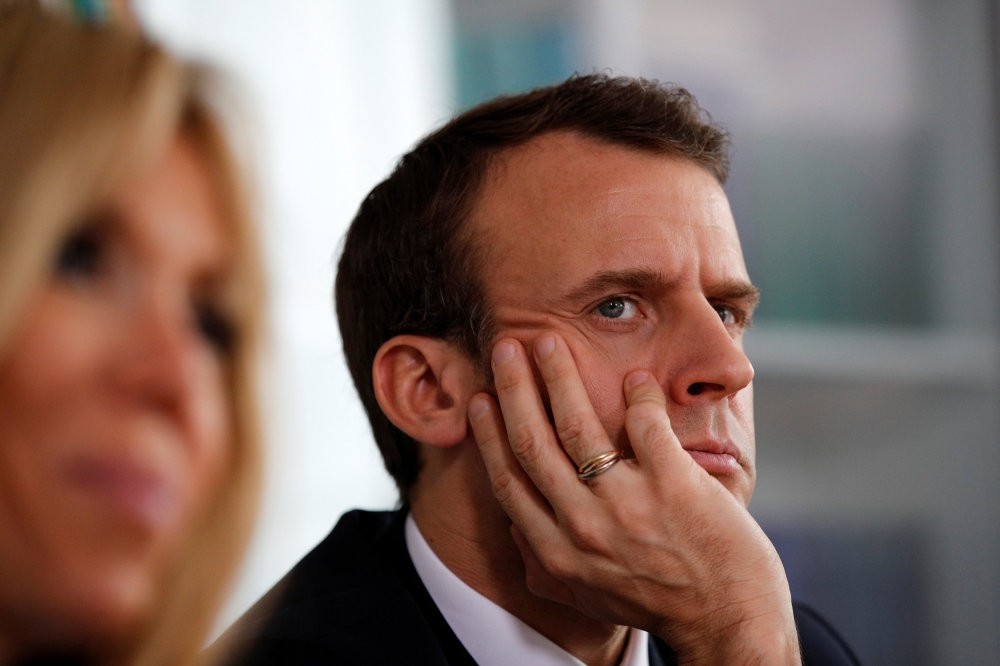 French President Macron said on Sunday that he had convinced U.S. President Trump to stay in Syria, a claim the White House has rejected.
by Mehmet Çelik Apr 17, 2018 12:00 am

Ankara and Paris have different motivations in Syria, analysts say, arguing that while French President Macron's moves on Syria are attempts to overcome challenges in domestic politics, Turkey works to establish peace in Syria

Turkey and France have different agendas regarding Syria, as President Emmanuel Macron is in search of a heroic story abroad to counter the challenges he faces in domestic politics while Ankara has been utilizing diplomatic and military energy to establish peace in the war-torn country. On Sunday, 40-year-old Macron, who is completing his first year in office, appeared on French television in an interview with two experienced French journalists.

"With these strikes and this intervention, we separated the Russians and the Turks on this issue. ... The Turks condemned the chemical strike and supported the operation that we conducted," Macron told BFM TV, referring to the U.S.-led airstrikes on Syrian regime chemical weapons facilities in response to the alleged use of chemical weapons in the Damascus suburbs of Eastern Ghouta and Douma on April 7.

Macron also said that he had convinced U.S. President Donald Trump to change his Syria policy and launch the airstrikes. "Ten days ago, President Trump wanted the United States of America to withdraw from Syria. We convinced him to remain," he said. Not long after Macron's remarks, White House spokeswoman Sarah Sanders said in a statement quoted in the media: "The U.S. mission has not changed – the president has been clear that he wants U.S. forces to come home as quickly as possible." Macron's claims about the Russian-Turkey split did not get a response from President Recep Tayyip Erdoğan or Prime Minister Binali Yıldırım during their speeches yesterday. However, Deputy Prime Minister Bekir Bozdağ and Foreign Minister Mevlüt Çavuşoğlu both addressed Macron's remarks harshly.

"In its Syria policy, Turkey is not siding with anyone nor against anyone," Bozdağ said during his visit to Qatar yesterday. He added that both the U.S. support to PKK affiliated People's Protection Units (YPG) and Russia's support to Bashar Assad are problematic for Ankara. Bozdağ also said that Turkey will come together with any actor that is in line with the policies Ankara finds to be right for Syria's future, which Turkish leaders and officials have said are to establish permanent piece in Syria, without Assad and without supporting terrorist groups. Çavuşoğlu said that many of Ankara's allies are "far from being serious, and they choose populism. … We expected presidential statements." Çavuşoğlu was speaking at a joint press conference with NATO Secretary General Jens Stoltenberg yesterday.

Çavuşoğlu also said that Turkey's ties with Russia are too strong for Macron to break. A statement also came from Russia that rejected Macron's claim. "No, these strikes did not split us. It's no secret that the positions of Moscow and Ankara differ on a number of issues. At the same time, this does not prevent us from continuing to exchange views, to continue discussing this difference in positions," Kremlin spokesman Dmitriy Peskov said yesterday.

Since the beginning of the Syrian civil war, Ankara has urged that Assad must be ousted from power in Syria and a political solution must prevail to bring the war and the killings of thousands of Syrians to an end. In addition, Turkey also argues that all terrorist groups such as Daesh and the YPG must be eliminated to secure Syria's territorial integrity and ensure Turkey's national security. Turkey launched Operation Euphrates Shield to clear Daesh from its border on Aug. 24, 2016, and ran until March 2016. The Turkish military and Free Syrian Army (FSA) factions also launched Operation Olive Branch on Jan. 20 to eliminate the YPG in northwestern Syria, as it also constituted a national security threat for Ankara.

Erdoğan yesterday called for a new initiative for peace in the world, one where countries are no longer bombed with random justifications.

"Let's lay down a new foundation for peace in the world and let's not let rain down bombs on these countries at random, not allow the pounding of barrel bombs," Erdoğan said at an entrepreneurship congress in Istanbul. Turkish leadership has long argued that political transition must happen in Syria for the humanitarian tragedy and regional instability to come to an end. Turkey has taken in nearly 4 million refugees from Syria, which has created a social and economic burden for the country. Ankara says that the re-establishment of an inclusive political order will enable the safe returns of refugees to their homes and bring an end to refugees crossing into European countries. Ankara also argues that Western support for the YPG in Syria further complicates the situation. Aside from U.S. military support and worsening ties between Ankara and Washington, Ankara also did not welcome Macron's recent meeting with senior YPG figures at the Elysee Palace in which he offered the group support. Macron offering to play a mediator role between the YPG and Ankara was harshly criticized by the Turkish government, which said: "Turkey does not negotiate with terrorists."

Maxime Gauin, a French historian with particular focus on Turkey, said that Macron has made a historic error by siding with the YPG. "If I had a suggestion to make to Emmanuel Macron, it would be give new guarantees to Turkey regarding the PKK such as a systematic ban on demonstrations in support to this terrorist group and its Syrian branch and a new step in the improvement of the fight against the funding networks of the PKK in France," Gauin said. Commenting on a possible French-Turkish cooperation in Syria, Gauin said given "realities of geography, the legacy of history and the necessity for cooperation," it would be an effective option for France to strengthen diplomatic ties with Ankara.

Some have interpreted Macron's recent moves in foreign policy as an exit strategy by the French president from the internal political chaos he has been facing at home.

Saadet Oruç, a columnist for Daily Sabah and an advisor to Erdoğan, told Daily Sabah that Macron is facing internal disorder in domestic politics and so he is looking for an exit strategy. "Macron is showing a heroic stance by saying he convinced the U.S. in changing policy in Syria, but the White House said otherwise." Oruç also commented on Macron's claims about a Russian-Turkish split: "Macron takes one step forward, two steps back" in his diplomatic moves. "Macron should make more responsible statements." Responding to a question about Ankara's position on Marcon's desire to be involved in Syria diplomatically, Oruç said: "When it comes to Syria policy, Turkey sets its agenda based on principles, not countries."

During the interview, Macron said France wants to involve Western powers, Russia and Turkey in a new diplomatic initiative for a political solution in Syria. The French president, who is scheduled to visit the U.S. next week, and Russia next month, has also voiced his willingness to play a key mediator role between the U.S. and Russia, who have come to a brink of military confrontation over the Syrian regime's use of chemical weapons. Russia and Iran are staunch backers of Assad.

Jana Jabbour, a research associate at Sciences Po Paris and a professor at Saint Joseph University in Beirut, said: "Macron is trying to divert public attention from domestic politics to foreign politics by seeking to play a role in the Syria crisis."

Macron's government began to implement plans to tax retirees more and employees less, cut jobs in some hospitals, reorganize the justice system and apply a new university admissions system, all of which have prompted protests. Jabbour added: "A growing role for France in Syria is used as an exit strategy from domestic problems and as an instrument to embellish the political outcome of Macron's presidency after one year in power." Jabbour also said that Macron has an attempt to re-establish France's reputation on the international level, but he can only be successful in the international arena, as in the Syrian civil war, only if "he closely coordinates with Ankara, Moscow and Tehran and brings them on board."