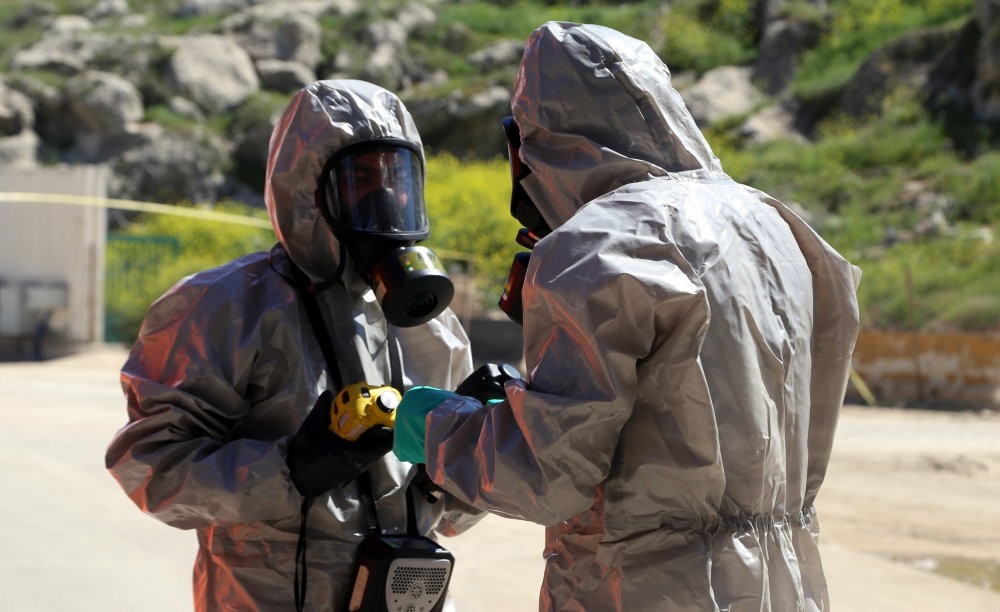 Syrian opposition activists, rescue workers and medics claimed that regime aircrafts dropped bombs with toxic chemicals on April 7 that killed dozens in Douma, which the regime and its allies have denied.
by Mustafa Kırıkçıoğlu Apr 20, 2018 12:00 am

The effectiveness of the U.S.-led missile strikes to deter the Assad regime's capability to reproduce chemical weapons is unknown, since experts have said the limited impact of the airstrikes did not aim to inflict irreversible damage on the weapons infrastructure

A cloud of suspicion looms over the deterrence of U.S.-led attacks, which targeted chemical plants and several other strategic military locations of Syria's Bashar Assad regime, as the regime is allegedly still maintaining its chemical weapon production capabilities.

Syrian opposition activists, rescue workers and medics reported on April 7 that dozens of people were killed in Douma, located in northeastern Damascus, after regime aircraft dropped bombs with toxic chemicals on the then-rebel-held town. The Assad regime and its allies immediately rejected the claim. Moscow initially asserted that the attack did not happen and was staged by the White Helmets, a Syrian civil defense organization, to justify the U.S. strike on the Assad regime. Then, it claimed that the British government could be behind the allegations. Eventually, U.S., U.K. and French forces conducted a military operation on the Assad regime despite Russia's warnings on refraining from a possible attack.

Since the strikes took place on April 14, the effectiveness of it on destroying the Assad regime's capability of having chemical weapons has been questioned.

Can Kasapoğlu, a defense analyst at the Centre for Economics and Foreign Policy Studies (EDAM), told Daily Sabah that the recent strike was limited in nature, and it was more of a solid political signaling effort rather than an attempt to irreversibly degrade the regime's weapons of mass destruction (WMD) infrastructure. He added that the regime tends to use these weapons of terror in high-risk operational environments to augment its troubled manpower on the ground.

In a similar attack in last year, U.S. airplanes conducted airstrikes on the Shayrat Air Base that located Homs with 59 Tomahawk Land Attack Missiles as a response to the alleged use of chemical weapons in the Idlib governorate on April 4. The Assad regime and its allies asserted that the air base received limited damage, since it is started to be used again a short time later.

"First of all, chemical and biological warfare (CBW) proliferation simply depends on elite personnel with critical know-how. As long as the regime keeps its CBW cadres, it can easily rebuild its WMD capabilities. Secondly, strategic cooperation with North Korea remains the epicenter of Syria's strategic weapons proliferation, not only in chemical and biological warfare segments, but also regarding the ballistic missile proliferation. This dangerous relationship has not been addressed so far," he said.

After the operation, U.S. President Donald Trump declared on his Twitter account "mission accomplished" regarding the April 14 attack on three targets.

On the other hand, the Russian military said the Assad regime Soviet-made air defense systems intercepted all 12 cruise missile aimed at a Syrian air base. Also, a regime statement said the U.S., U.K. and France fired a total of 110 missiles during the attack on targets located in Damascus and outside of the city and their air defenses "effectively shot down most of them."

Kasapoğlu said in the absence of active Russian defensive operations, it would be technically hard to believe that the regime's Air Defense Force achieved around 70 percent interception rates in the face of the state-of-the-art cruise missiles used by the U.S., U.K. and France but possibility of "a few successful hits" should not be ruled out.

"In a larger context, and very interestingly of course, information operations function as a critical part of Russia's anti-access/area denial [A2/AD] operational art. Thus, in the age of post-truth, promoting these claims are a key concept of degrading the limited missile strike's follow-up effects," he said. Kasapoğlu adding that it is not a secret that the Russian Ministry of Defense has been focusing on boosting Syria's air and missile defense capabilities, which "visibly paid off in the Israeli F-16 incident."

Israel attacked a military base in Syria in February, in which the Assad regime's air defenses shot down one of Israel's F-16 fighter jets, which crashed inside of Israel. It became the first Israeli plane lost to enemy fire in decades.

Following the joint strikes led by the U.S., Russia said it might consider supplying S-300 missile systems to its longtime ally. According to an article in Bloomberg, the possible delivery of the Russian air defense systems is expected to cause further tension over Syria as it would certainly alarm Israel, which has enjoyed freedom of movement in Syrian air space for years. Since the start of the Syrian civil war in 2011, Israel has carried out at least 150 bombing raids in Syria, according to former Israeli Ambassador to Moscow Zvi Magen.