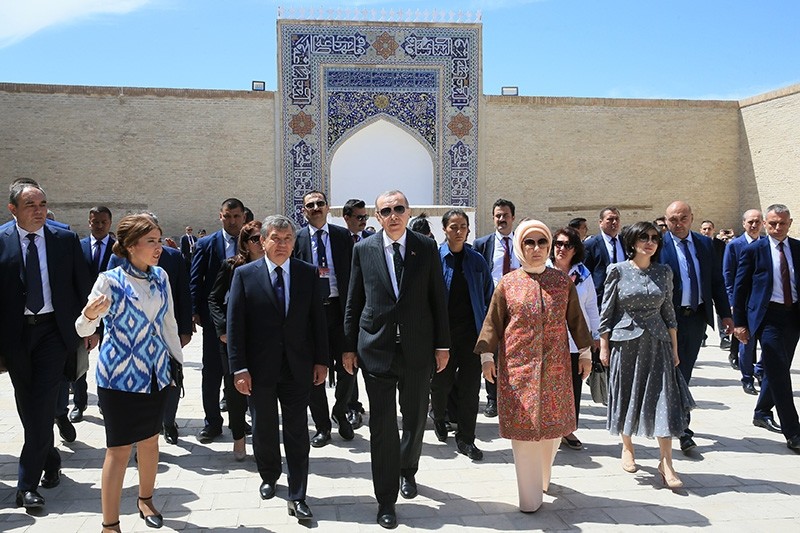 President Recep Tayyip Erdoğan visited the tomb of Sheikh Baha-ud-Din Naqshband, a Sufi master, in Bukhara on Tuesday as part of his three-day official trip to Uzbekistan.

Tuesday morning, Erdoğan and First Lady Emine Erdoğan arrived in Bukhara from the Uzbek capital Tashkent. They were welcomed by Uzbek President Shavkat Mirziyoyev and his wife Ziraat Mirziyoyev.

As part of the Bukhara visit, President Erdoğan, accompanied by Emine Erdoğan, and Uzbek President Mirziyoyev and his wife, visited Sheikh Naqshbandi's tomb.

After that, two presidents and their wives walked in the adjacent madrasa, a traditional Islamic educational institution. Erdoğan looked over the historical plates in the madrasa.

Baha-ud-Din Naqshband was the founder of one of the largest Sufi Muslim orders, the Naqshbandi, influential across Turkey and Central Asia.

The President also visited the tombs of Imam Bukhari and Imam al-Tirmidhi, authors of Sahih al-Bukhari and Jami` at-Tirmidhi, respectively, which are regarded by Sunni Muslims as the most precise and authentic collections of hadith.

He also visited the Chashma-Ayub Mausoleum and Madrasa of Ulugh Beg, a Timurid ruler as well as an astronomer and mathematician.

"Even though they have passed away, their legacy continues to enlighten not just Uzbekistan but Anatolia as well," Erdoğan said after the visits. The president and his entourage also watched a show of traditional street dancers.

President Erdoğan and the First Lady were offered mulberries in the garden after visit. After that, Erdoğan visited the Po-i-Kalyan Madrasa and Ark Castle.

Erdoğan was welcomed in the capital Tashkent on Monday by Mirziyoyev. An official ceremony was held in the capital, where the national anthems of both countries were played before the official talks began. During his stay, the Turkish president discussed bilateral, economic and political relations with Mirziyoyev.

Erdoğan also addressed the Uzbek parliament and attended the Turkey-Uzbekistan Business Forum along with Mirziyoyev.

At a press conference before leaving Turkey, Erdoğan had said that one of these institutes will be named after Imam Bukhari while the other one will carry the name of Imam Maturidi, a famous Sunni jurist and theologian from ninth-century Samarkand.

After his program in Bukhara, Erdoğan was expected to arrive in South Korea for an official visit.