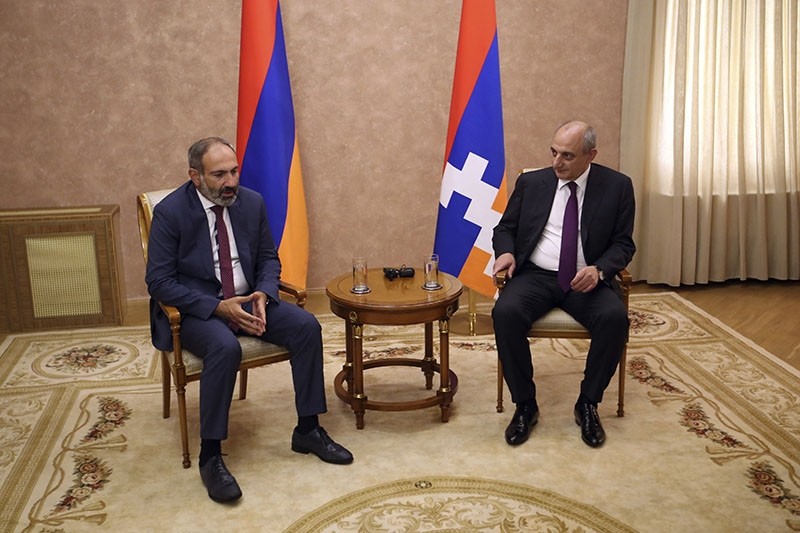 Armenia's Prime Minister Nikol Pashinian, left, and the President Bako Sahakyan of the separatist Nagorno-Karabakh region speak during their meeting in the capital Stepanakert, Wednesday, May 9, 2018. (AP Photo)
by Daily Sabah with Agencies May 09, 2018 12:00 am

Armenia's newly-elected Prime Minister Nikol Pashinian visited Azerbaijan's occupied Nagorno-Karabakh region on Wednesday – a day after the parliament gave him the green light for the post – and said his country is ready to establish diplomatic and economic ties with Turkey without preconditions.

The occupation of some 80 percent of the autonomous and predominantly-Armenian Nagorno-Karabakh region and its surrounding areas constitutes the main reason Turkey has cut bilateral trade relations and shut down road, rail and air connections since 1993. The so-called Republic of Artsakh established in the region is not recognized by the international community, which considers the region as Azerbaijani territory.

The conflict between 1992 and 1994 led to the deaths of tens of thousands of civilians and soldiers on both sides, in addition to displacing hundreds of thousands of people, mainly Azerbaijanis. Some 20 percent of Azerbaijan's territory remains occupied.

Speaking at a news conference in regional capital Khankendi (Stepanakert in Armenian), Pashinian said Turkey is the side with conditions on normalizing relations with Armenia.

"[Turkey] ties this precondition to its relations with another country, [Azerbaijan]. We don't expect them to recognize the genocide either. We show efforts for this issue to gain international recognition. And we do this for this tragedy to not to be repeated again," Pashinian said, referring to 1915 events that led to the deaths of hundreds of thousands of Ottoman Armenians as well as Muslims in eastern Anatolia during WWI.

Both Azerbaijan and Turkey have closed their borders with Armenia over the conflict, inhibiting trade and leaving Armenia in semi-isolation. It has direct land access only to Georgia and to a narrow border with Iran.

The measures over Armenia's unlawful occupation of Nagorno-Karabakh are among the main reasons of the poverty that fueled weekslong protests that led to the resignation of former President and Prime Minister Serzh Sargsyan, who represents a group of politicians from Karabakh that has led the country since it gained independence from the Soviet Union in 1991.

Pashinian, an opposition figure and the leader of protests, was appointed as the country's new prime minister Tuesday, after he was rejected in an initial vote, leading to mass protests and a general strike.

His election capped weeks of political turmoil that had raised concerns about stability in the Caucasus Mountains region. He has yet to articulate a platform and faces an array of challenges, including the Nagorno-Karabakh conflict.

In his first full day in office Wednesday, Pashinian visited the disputed territory of Nagorno-Karabakh, pledging to maintain security guarantees for a region that's part of rival Azerbaijan. Wednesday's trip was also a provocative move toward Azerbaijan, whose government said the Armenian leader's visit stemmed from "naivete" or "ignorance" about the Nagorno-Karabakh conflict.

A year later, in October 2009, two protocols were signed to rebuild diplomatic and bilateral relations. The relations have not given any signal of improvement since then, but to the contrary, both countries turned to the era of exchanging criticism.

Ankara does not accept the alleged "genocide" but acknowledges there were casualties on both sides during World War I. It objects to the presentation of the incidents as "genocide" but describes the 1915 events as a tragedy for both sides.