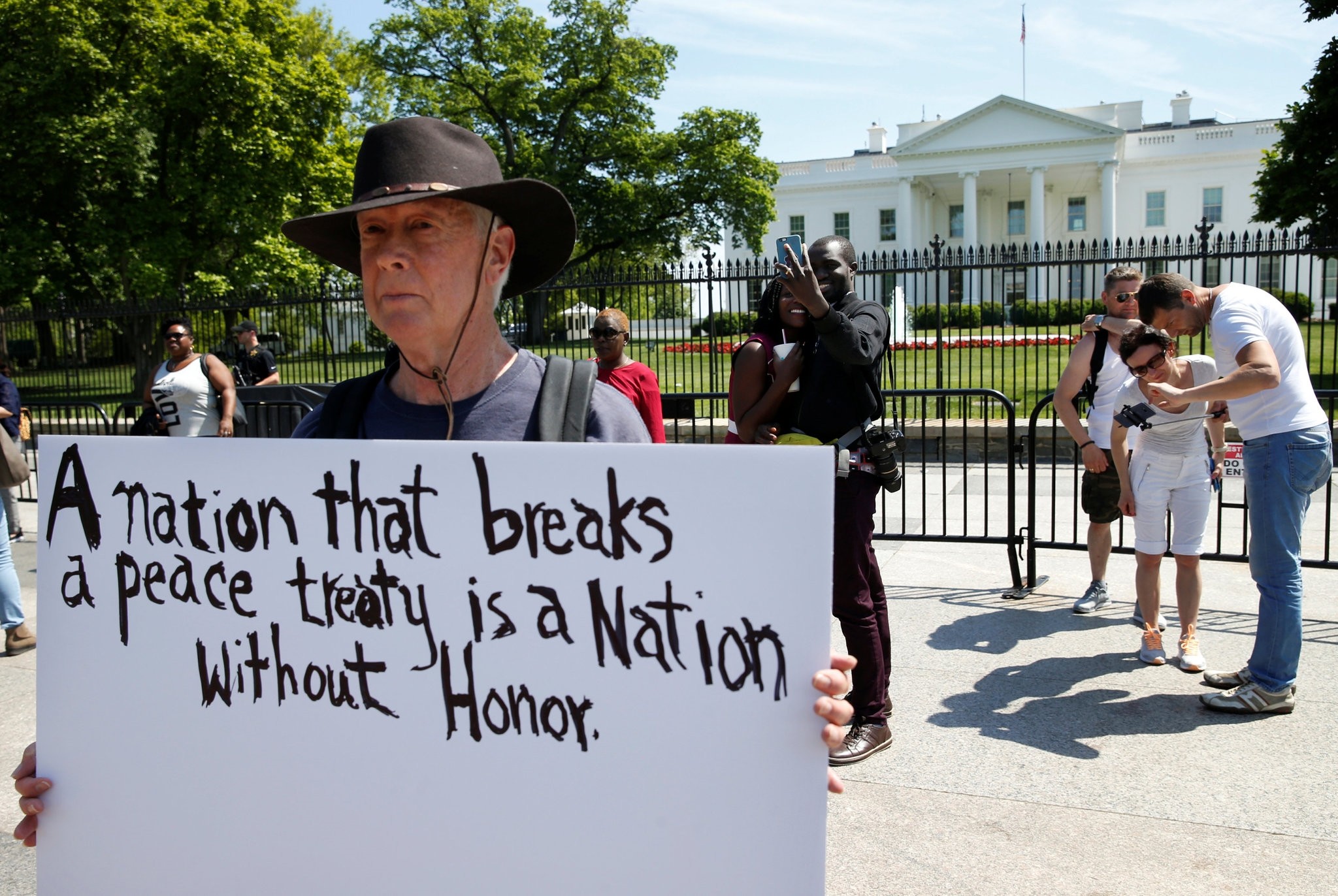 David Barrows protests outside of the White House as U.S. President Donald Trump announces the U.S.u2019s withdrawal from the Iran nuclear deal, May 8.
by Daily Sabah with Agencies May 10, 2018 12:00 am

U.S. President Donald Trump's decision to exit the Iran nuclear deal has received opposition from the U.S.'s closest European allies and key regional players, as the White House continues to isolate itself globally with its policies

U.S. President Donald Trump's unilateral move to exit from the Iran nuclear agreement will isolate the U.S., as Washington's European allies and key regional players, including Turkey criticized the decision. "After these consultations, it is clear to me that we cannot prevent an Iranian nuclear bomb under the decaying, rotten structure of the current agreement," Trump said Tuesday while announcing the exit from the agreement with Iran, known as the Joint Comprehensive Plan of Action (JCPOA). Since before stepping into the White House, Trump had criticized the Iran deal, signed by P5+1, the five permanent members of the United Nations Security Council - the U.S., Russia, France, China, the U.K. - plus Germany, and Tehran, with the European Union's support.

Trump has long said that former U.S. President Barack Obama had made a mistake by agreeing to the terms of the framework, which has also been criticized by the U.S.'s Middle East ally, Israel. At the time, however, Obama was praised by many countries for de-escalating tensions with Iran on nuclear proliferation through diplomacy. The EU said yesterday in a statement that it "deeply regrets the announcement by U.S. President Trump to withdraw from the Joint Comprehensive Plan of Action" "As long as Iran continues to implement its nuclear-related commitments, as it has been doing so far and has been confirmed by the International Atomic Energy Agency [IAEA] in 10 consecutive reports, the EU will remain committed to the continued full and effective implementation of the nuclear deal," the statement by the High Representative on behalf of the EU said.

Under the deal, Iran would reduce its nuclear facilities and activities of Uranium enrichment, and in return, nuclear-related economic sanctions imposed on Tehran would be eased.

"The lifting of nuclear-related sanctions is an essential part of the agreement. The EU has repeatedly stressed that the sanctions lifting has a positive impact on trade and economic relations with Iran. The EU stresses its commitment to ensuring that this can continue to be delivered," the EU statement added.

The EU also said in the statement it will continue to work with the international community, despite Trump's move, as there have been years of diplomatic efforts to establish a framework with Tehran.

The unity among the EU, as well as most of the key global leaders involved in Iran and other related parties, is expected to cause a new level of isolation of Trump administration. Trump's controversial move on relocating the U.S. embassy in Israel from Tel Aviv to Jerusalem has also recently angered the Muslim world. In addition, Washington's decision to impose tariffs on steel imports to the U.S. has also strained ties with its trade partners, including China. The recent moves by Trump, as he entered his second year at the White House, are said by pundits to be his put "America first" in world affairs. However, steps taken by Trump have mostly led to U.S. isolation abroad. Trump's elimination of many close key advisers, who had slowed him down, has also been linked by some experts to his aggressive policies.

After Trump announced that he will not sign the extension of relief on sanctions, which was due on May 12, the U.S. government will also "begin re-imposing the U.S. nuclear-related sanctions that were lifted to effectuate the JCPOA sanctions relief, following a wind-down period," a statement on U.S. Treasury's website said.

In a brief statement yesterday, IAEA Director General Yukiya Amano, said that "as of today, the IAEA can confirm that the nuclear-related commitments are being implemented by Iran."

The Vienna-based IAEA was tasked with monitoring and verifying Iran's adherence to the 2015 deal with six world powers. Amano said, "Iran is subject to the world's most robust nuclear verification regime under the [deal], which is a significant verification gain."

The tensions over Iran's nuclear deal began in August 2002 when an Iranian nuclear site in the central city of Natanz was discovered by intelligence groups and Iran was accused of enriching uranium to build nuclear warheads.

The IAEA had confirmed the accusations and after that, the negotiations between Western powers and Iran had begun. In June 2006, P5+1 was formed to negotiate with Iran. However, the initial negotiations were not participated by the U.S., until July 2008, when former U.S. President George W. Bush agreed to participate in Iran talks.

Ending the Iran deal is expected to fuel new regional tensions in the Middle East, while it is also expected to cause damage to already not so strong ties between the U.S. and the key EU member states. The EU argues that new sanctions against Iran will also affect their trade relations with Iran.

Speaking in a televised address to the people on the JCPOA, Iranian President Hassan Rouhani said: "As verified by the International Atomic Energy Agency (IAEA), Iran has lived up to all its commitments and tonight, it was revealed who the unfaithful is," and that Trump's move was a "psychological war."

"What Trump did was a psychological war and economic pressure and we will not let him win," Rouhani said and added: "Today, we saw what we have been reiterating for 40 years, and that is Iran is a country that lives up to its commitments and the U.S. is a country that has never done so."

For many years, Iran insisted that its nuclear program was for peaceful purposes but Tehran failed to convince the international community.

The 2015 deal placed unprecedented restrictions on Iran's nuclear program, as Tehran agreed to limit its sensitive nuclear activities and allow international inspectors to visit its facilities. In exchange, Iran would be relieved from sanctions worth of billions of dollars. However, Trump has railed against it since his presidential campaign, repeatedly calling it the "worst deal" he has ever seen.

Aside from the U.S., all the negotiating parties involved in the deal, have announced that they support maintaining the framework, arguing that it is the best option to oversee Iran's nuclear ambitions.

Separately, French Foreign Minister Jean-Yves Le Drian expressed concern about the political stability of the region after the U.S. withdrawal from the Iranian nuclear agreement. German Chancellor Angela Merkel also said yesterday that the U.S. withdrawal from the Iran nuclear deal shows Europe will face increasing responsibility to secure peace and seek political solutions to conflicts. Merkel underlined the commitment of Germany, France and Britain to stick with the accord.

Merkel said in a speech to her Christian Democratic Union of Germany (CDU), that "yesterday [Tuesday] showed us once again that we will face more responsibility in Europe, in foreign policy, in the area of securing peace, in the area of the political solutions we must find."

"China regrets this decision made by the U.S.," Foreign Ministry spokesman Geng Shuang told a regular press briefing yesterday. Geng said China will maintain "normal economic and trade exchanges" with Iran despite Trump's decision to withdraw from the 2015 accord and re-impose sanctions on Tehran.

Erdoğan: U.S. will not gain anything from ending Iran deal

Washington will not gain anything as Trump steered the U.S. out of the Iran nuclear deal, President Recep Tayyip Erdoğan said, adding that the deal was a hope for regional stability.

The deal was made "possible after years of negativity, in the end raising hope all around the globe. At the drop of a hat, turning this deal around and retreating from this deal, possibly is not just going to impact the region but also the entire world," Erdoğan told CNN International.

"If any document bears your signature, you need to respect that, you need to abide by that," he underlined. Asked if Trump's action could lead to a geopolitical war, Erdoğan said: "That's not what we would wish to see, of course, this is not something would like to expect. However, in my view, the U.S. will be the one to lose. Iran will never compromise on this agreement and will abide by this agreement until the end."

In a briefing in Ankara, Presidential Spokesperson İbrahim Kalın said that Turkey was "in favor of continuing of the deal," and that "the U.S.'s unilateral withdraw is worrying." Kalın added that Turkey does not want any country in its region to have nuclear weapons.

Kalın underlined that "Iran is a significant economic partner for Turkey. We have essential ties in various fields." Turkey has long supported solving the nuclear issue with Iran through diplomatic channels and that sanctions would not bring stability in the region.

In 2010, Turkey and Brazil had attempted to mediate between Iran and the Western powers on reaching a solution. Then Prime Minister, Erdoğan had traveled to Tehran to join former Brazilian President Luiz Inacio Lula da Silva to negotiate with Iranian officials. In May 2010, Brazil and Turkey announced a deal with Iran, however, it was soon after rejected by the U.S. and the arrangement did not continue. The U.S.'s Middle East allies, Egypt and Kuwait also expressed concerns over Trump's controversial move.

While the withdrawal by the U.S. has been criticized by many of its closest allies, Iran's regional rivals, Israel, Saudi Arabia and the United Arab Emirates have supported Trump's decision on Iran deal.

Riyadh said it "supports and welcomes" Trump's decision and "supports reinstating economic sanctions on the Iranian regime, which have been suspended under the nuclear deal," according to its official news agency, SPA.

Israel has been among the strongest supporters of Trump's decision as it has traditionally said Iran never stopped its ambition to build nuclear weapons.

Israeli President Reuven Rivlin described the decision as a significant step in ensuring Israel's security, the region and the entire free world.