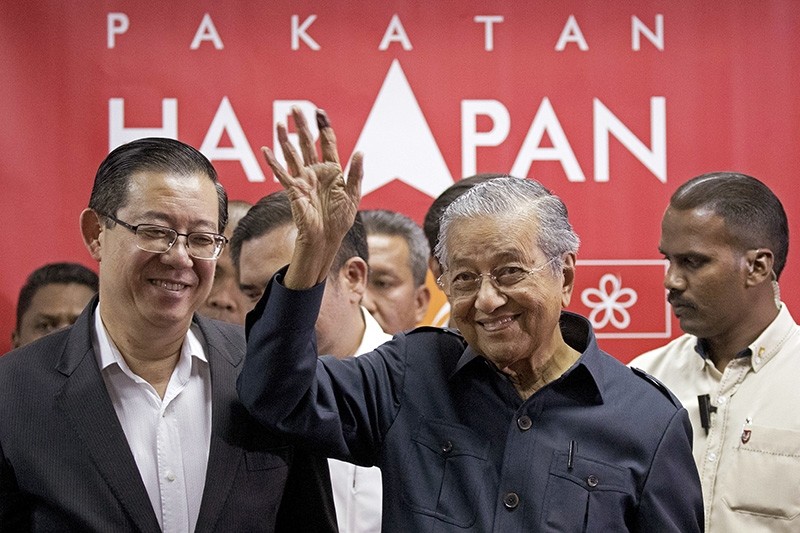 According to presidential sources, Erdoğan wished success to Mahathir and stressed the importance of increasing bilateral relations between the two countries. He is also known as a close friend to Erdoğan.

Mahathir's alliance, joined by jailed opposition leader Anwar Ibrahim, scored a stunning election victory Wednesday by ousting the coalition that had ruled Malaysia since independence from Britain in 1957. It was a remarkable comeback for Mahathir, who was prime minister for 22 years until 2003 and is now the world's oldest leader at 92.

The Mahathir-led opposition coalition secured 122 deputies in the 222-seat parliament, enough to form the government.

The three are leaders of the four parties in Mahathir's alliance.

The finance minister has been an ethnic Muslim Malay since 1974 and the appointment of Lim, a chartered accountant who led the wealthy northern state of Penang since 2008, reflects reforms pledged by Mahathir's alliance to heal racial divisions in the country blamed on decades-old preferential policies.

"I don't consider myself as a Chinese, I am a Malaysian. I will ensure that the interests of all Malaysians are protected," Lim, 57, said at a news conference.

Mahathir said his Cabinet would have 25 members and that he would name the remaining members this coming week. His deputy is Wan Azizah Wan Ismail, the country's first female deputy prime minister and head of another party in the pact.

Mahathir also said a special five-member council would be set up to advise the government on economic and financial matters. The council will include Hong Kong-based tycoon Robert Kuok, Malaysia's richest man, he said.

He had instructed the immigration department to blacklist scandal-ridden former Prime Minister Najib Razak and his wife from leaving the country. Najib said on social media earlier Saturday that he was planning to take a short vacation, but denied he was fleeing.

Mahathir said there was sufficient evidence for an investigation into Najib, in reference to a massive corruption scandal involving the 1MDB state fund that Najib set up and is being investigated in the United States and other countries.

Mahathir also said Saturday that the future of jailed opposition leader Anwar, whose support in the opposition coalition helped oust Najib, would be determined by the party.

Anwar's daughter Nurul Izzah Anwar said Saturday her father would be released from prison on Tuesday.

Mahathir said Friday he would begin the process of obtaining an immediate pardon for Anwar, who was imprisoned twice on charges widely believed to be fabricated by the National Front to crush the opposition.

Anwar was due out in June. A royal pardon would allow him to run for political office again and potentially become prime minister.