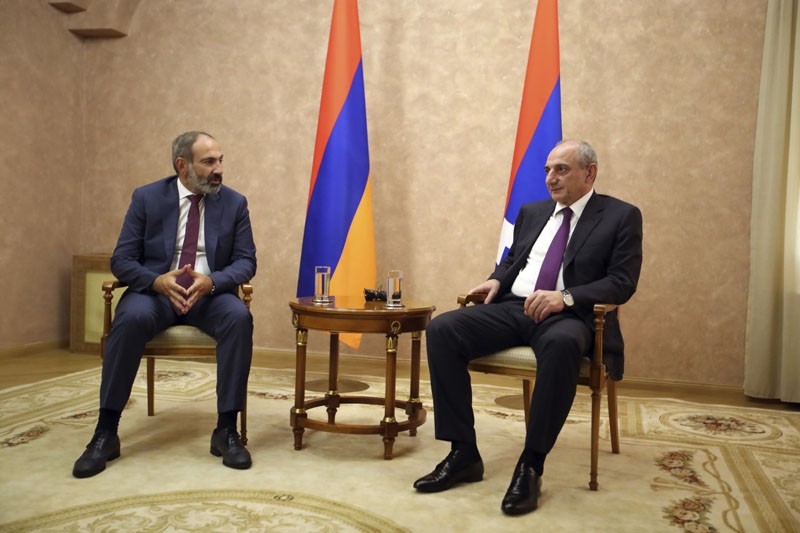 Ankara is willing to welcome a possible rapprochement with Armenia, but, expects more concrete steps to improve relations as Pashinian took over as PM and signaled a change in approach

Armenia's newly elected Prime Minister Nikol Pashinian's positive and hopeful remarks on Turkey are admirable, however, solid steps must be taken rather than remaining at the rhetorical level for a remarkable development in bilateral relations, experts say. On Wednesday, Pashinian visited Azerbaijan's Nagorno-Karabakh region occupied by Armenia - a day after the Parliament gave him the green light for the post - and said his country is ready to establish diplomatic and economic ties with Turkey without preconditions.

Speaking at a news conference in regional capital Khankendi (Stepanakert in Armenian), Pashinian said Turkey is the side with conditions on normalizing relations with Armenia.

"[Turkey] ties this precondition to its relations with another country, [Azerbaijan]. We don't expect them to recognize the genocide either. We show efforts for this issue to gain international recognition. And we do this for this tragedy to not to be repeated again," Pashinian said, referring to 1915 events that led to the deaths of hundreds of thousands of Ottoman Armenians as well as Muslims in eastern Anatolia during WW I.

Markar Esayan, an Armenian-Turkish journalist and politician, told Daily Sabah that if Armenia would take steps to restore ties Turkey would welcome them.

"Ties between Turkey and Armenia might develop if Armenia manages to see Turkey as a medium in the issue of Nagorno-Karabakh rather than a hostile country," Esayan underlined.

The conflict in the Nagorno-Karabakh region is also an important problem between two countries other than the genocide allegations. Both Azerbaijan and Turkey have closed their borders with Armenia over the conflict in the region, inhibiting trade and leaving Armenia in semi-isolation. It has direct land access only to Georgia and to a narrow border with Iran.

The measures over Armenia's unlawful occupation of Nagorno-Karabakh are also among the main reasons of the poverty that fueled weeks-long protests that led to the resignation of former President and Prime Minister Sargsyan, who represents a group of politicians from Karabakh that has led the country since it gained independence from the Soviet Union in 1991.

He also underscored that Turkey does not have a negative stand against Armenia. "As two neighbor countries both sides would benefit from good ties," Esayan stated.

A year later, in October 2009, two protocols were signed to rebuild diplomatic and bilateral relations. Relations have not improved since then; to the contrary, both countries turned to the era of exchanging criticism.

Prime Minister Binali Yıldırım said yesterday that if Armenia wants to open a new page in its relations with Turkey, Turkey would grasp and attitude in accordance with that.

"If Armenia wants to drop its years-long hostile attitude to Turkey, as well as against Turkey's territorial integrity, if Armenia wants to give up on all of these attitudes, then we would see the details of the process and act in accordance with that," Yıldırım said.

According to Alev Kılıç, director of the Center for Eurasian Studies (AVİM), previously, President Sargsyan had used the same rhetoric as well, while adding that it is not possible to see a glimpse of hope for restoring ties in the short term.

As the underlying reason, Kılıç pointed to the remarks of Pashinian, where he ensured that their efforts for international recognition of "genocide" would continue.

Ankara does not accept the alleged "genocide" claims, but acknowledges there were casualties on both sides during World War I. It objects to the presentation of the incidents as "genocide" but describes the 1915 events as a tragedy for both sides.

Turkey has repeatedly proposed the creation of a joint commission of historians from Turkey and Armenia plus international experts to tackle the issue.

Kılıç further highlighted that in the long term a recovery in ties might be expected if Armenia focuses on its national interest, which could benefit from enhancing ties with Turkey.

Pashinian, an opposition figure and the leader of protests, was appointed as the country's new prime minister Tuesday, after he was rejected in an initial vote, leading to mass protests and a general strike.

His election capped weeks of political turmoil that had raised concerns about stability in the Caucasus Mountains region. He has yet to articulate a platform and faces an array of challenges, including the Nagorno-Karabakh conflict.

*Contributed by Özgenur Sevinç from Ankara