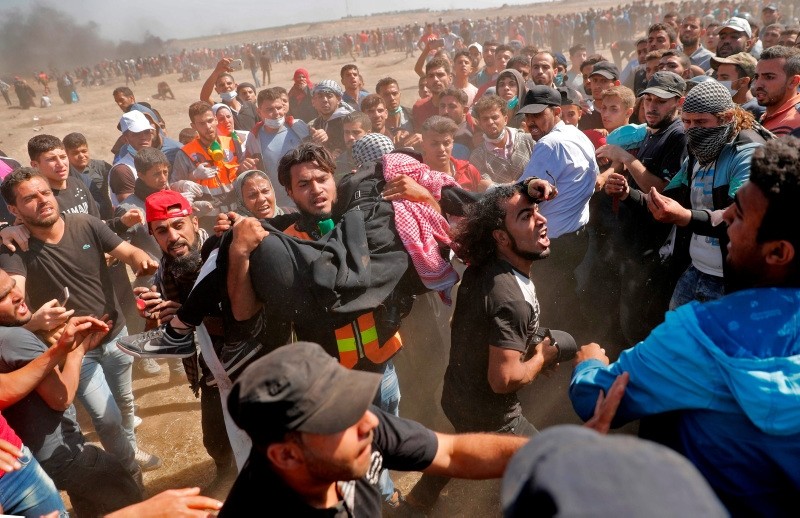 Palestinians carry a demonstrator injured during clashes with Israeli forces near the border between the Gaza strip and Israel east of Gaza City on May 14, 2018 (AFP Photo)
by daily sabah
May 14, 2018 12:00 am

Besides causing outrage in Turkey, many politicians have condemned the Israeli army's attack that killed at least 52 Palestinians who were protesting the U.S. embassy's move to Jerusalem.

The Foreign Ministry strongly condemned the attacks on Monday in a written statement.

"We curse the massacre carried out by Israeli security forces encouraged by this step on the Palestinians participating in peaceful demonstrations. Neither regional nor global peace and stability will be viable unless the Palestinian question is settled through a lasting and just solution and unfair treatments towards Palestinian people cease," the statement said.

"We strongly condemn the decision of the U.S. Administration to move its embassy from Tel Aviv to Jerusalem violating international law and all relevant UN Resolutions. We reiterate that this action is legally null and void," it added.

Thousands of Palestinians had gathered on Gaza Strip's eastern border since early morning to take part in protests aimed to commemorate the Nakba anniversary and protest relocating the U.S. Embassy from Tel Aviv to Jerusalem.

The rallies are expected to culminate today, the 70th anniversary of Israel's establishment which is an event Palestinians refer to as the "Nakba" or "the Catastrophe."

Speaking in Ankara, Prime Minister Binali Yıldırım also condemned the Israeli reaction towards protesting civilians in Gaza. "At one side, there is entertainment, ceremony. On the other, there young people who lost their lives. Is there a single Israeli who lost his life?" Yıldırım said.

"Unfortunately, the U.S. has arrogantly stood by the Israeli administration which kills civilians and has partnered in this humanitarian crime," Yıldırım added.

"There is a massacre there, state terror," said Çavuşoğlu in a live phone interview to Turkish broadcaster AHaber TV.

"Condemning today's massacre is not enough, joint steps must be taken," Çavuşoğlu said, commenting on the events. He further urged the international community to take joint steps in recognizing the State of Palestine.

Presidential spokesperson also reacted to the U.S. embassy's planned move from Tel Aviv to Jerusalem on Monday. "Palestine is not alone. Jerusalem is not alone. Occupation will end and truth and justice will prevail," İbrahim Kalın wrote on his official Twitter account.

In a second tweet, he said: "Every Palestinian killed by Israel in the occupied territories today is another dark spot, another crime added to Israel's wall of shame. The so-called civilized world must be ashamed of its silence in the face of this systematic barbarism."

"We cannot accept the unlawful attacks against Jerusalem's status and Palestinians' fundamental rights. Palestine and Jerusalem are not alone," Justice Minister Abdülhamit Gül also tweeted on the issue.

Tweeting in English, both Kalın and Gül used hashtag "Nakba70" in their statements.

"The U.S. by moving its Israeli embassy to Jerusalem will not bring comfort, security, stability, and peace to the region; it will increase the already existing discomfort, insecurity, instability, crisis and conflicts; and also trigger many unforeseen negativities," Bozdağ said in a series of tweets Monday.

"Jerusalem will eventually be fully liberated; U.S. and Israel will ultimately have to leave Jerusalem to its true owners," Bozdağ added.

"Terror state Israel killed at least 37 innocent Palestinians, injured at least 1700 others (for now with real bullets long the Gaza border, protesters streamed to the frontier for the climax of a six week demonstration as the United States prepared to open its embassy in Jerusalem," Şentop said in his tweets.

There were also many protests in many provinces Monday, including Istanbul, in which dozens of people gathered to condemn both the U.S. embassy move and the Israeli aggression toward civilians.