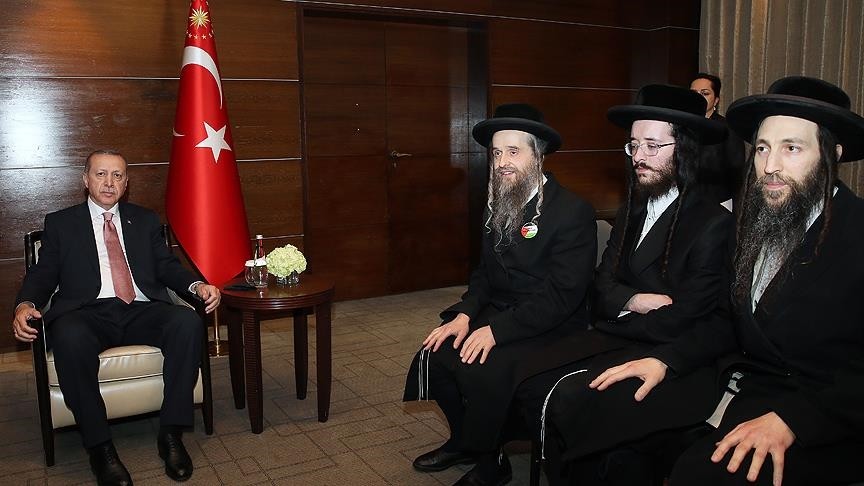 The anti-Zionist Neturei Karta organization delivered a message of support and solidarity with Palestine late Tuesday, as well as one of criticism and condemnation to Israel over its treatment of Palestinian civilians, in a meeting with President Recep Tayyip Erdoğan in London.

The Orthodox Jew group led by Rabbi Elahanan Beck held a meeting with Erdoğan, Minister for EU Affairs and Chief Negotiator Ömer Çelik and Deputy Secretary General and Spokesperson of the Presidency Ibrahim Kalın in Intercontinental Hotel that lasted for about half an hour, sources said.

Elahanan Beck, the chief rabbi of Neturei Karta, said, "We have to realize and understand, helping the state of Israel is not in the favor of Jewish people."

Neturei Karta International brings together Orthodox Jews who believe that the Zionist cause of creating an Israeli state in the Middle East contradicts Jewish religious teachings, noting that such a state can only be created by the Messiah.

The members of the group are known to openly protest Israel, and support Palestinian groups through protests and events.

The meeting comes amid international outcry against Israeli violence against Palestinians in Gaza.

At least 62 Palestinians were killed and over 2,700 injured by Israeli forces along the Gaza border Monday amid protests marking the Nakba anniversary and the relocation of the U.S. Embassy from Tel Aviv to Jerusalem.

Nakba anniversary and the relocation of the U.S. Embassy from Tel Aviv to Jerusalem.