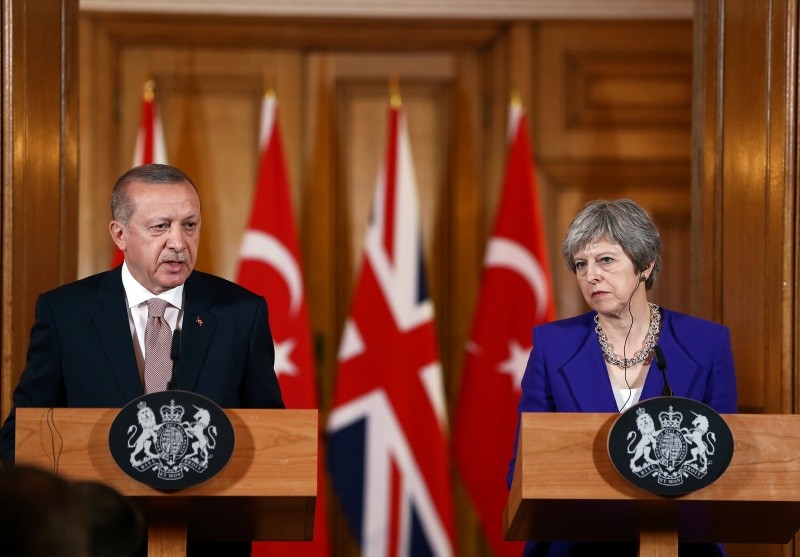 Turkey and the U.K. agreed that the violence perpetrated by Israeli forces against Palestinians in Gaza must stop, and an independent, transparent investigation is urgently needed into the killings, British Prime Minister Theresa May and President Recep Tayyip Erdoğan said in a press conference Tuesday.

"We will never accept the U.S. attempt to move embassy to Jerusalem and to recognize Jerusalem as Israeli capital," the president said, following his meeting with May in London.

Erdoğan said the U.S. government's "indifferent policies" encouraged Israel to carry out more on occupation and violence in Palestine.

He then reiterated his calls to the international community, urging the U.N. "to take action without wasting any more time to stop this oppression" in Palestine.

He also vowed that a planned summit this week of the world's main pan-Islamic body would send a "strong message" after Israeli forces killed dozens of Palestinians along the Gaza border.

"The extraordinary meeting on Friday will give a very strong message to the world from Istanbul," he said, adding that all members of the Organization of Islamic Cooperation (OIC) were invited.

May, for her part, called for an "independent and transparent investigation to find out what happened in Gaza yesterday."

At least 61 Palestinians were killed and thousands more injured by Israeli forces along the Gaza border Monday amid protests marking the Nakba anniversary and the relocation of the U.S. Embassy from Tel Aviv to Jerusalem.

May urged all sides to show restraint, saying "The loss of life we have seen is tragic and extremely concerning."

"Such violence is destructive to peace efforts and we call on all sides to show restraint," she said, adding that Israel's use of live fire was "deeply troubling", while Palestinian protests "must be peaceful".

'UK will remain a true friend for Turkey''

May said Britain's relationship with Turkey was indispensable, praising the impact of security cooperation and the prospect of close post-Brexit trade ties.

"It is right that those who sought to overthrow the democratically elected government are brought to justice," May said, speaking alongside Erdoğan in her Downing Street office.

But it is also important that Turkey, "which has been facing extraordinary pressures from the failed coup, instability across the border from Syria and from terrorism, does not lose sight of the values it is seeking to defend," she added.

Erdoğan reiterated appreciation for the solidarity extended by the U.K. over the 2016 defeated coup in Turkey.

His meeting with Queen Elizabeth II and Prime Minister May focused on bilateral ties in detail, the Turkish President said on the final day of his 3-day visit to the U.K.

"The trade and investment working group we formed during the prime minister's visit to Turkey in January 2017 is functioning well. We are also glad that a transition period between the U.K. and the EU is agreed in terms of Brexit," he said.

The president said the U.K. is the second biggest export market for Turkey, adding the trade volume between Turkey and the U.K. was at a level of $16 billion in 2017 but "our target for bilateral trade is $20 billion."

Also talking about cooperation in fight against terrorism, Erdoğan said Turkey would like to deepen relations with the U.K. in related matters such as banning the activities of terrorist organizations such as PKK, Daesh, DHKP-C and FETÖ, freezing their assets and deporting their members.

The Turkish president said he handed over a list of terrorists to the British prime minister. He stressed that Turkey killed 3,000 Daesh terrorists in Jarablus.

Responding to a question, Erdoğan underlined that Turkey deported more than 6,000 foreign fighters and said some are being tried in Turkey.

Since her visit to Ankara in January last year, May said: "Both Turkey and the U.K. have suffered grievous attacks by terrorists."

"Since Daesh is militarily defeated, we are aware of the risk of foreign fighters dispersing from Syria and Iraq. To counter this, we have today agreed concrete steps towards measures that would formalize our information sharing," she said.

The British premier said when Turkey deports such individuals, it would also share the evidential media collected from their mobile devices so conviction of them would be easier for the U.K.

Turkey and the U.K. also agreed for the need of a political settlement to end the war in Syria, May added.

She said the two countries "reiterated condemnation" over the "terrible chemical attacks in Douma and Salisbury.

She added that the two incidents are different in terms of magnitude, "they are part of a pattern to disregard the global norms to prohibit the use of chemical weapons."

May said British Home Office and Turkish Interior Ministry will be committed to information sharing between their agencies.

The British prime minister also commended Turkey's "extraordinary generosity" in hosting more than three and a half million Syrian refugees and educating more than 600,000 Syrian children.

"We recognize the enormous effort that the Turkish authorities are making to give those refugees the help they need," she said.