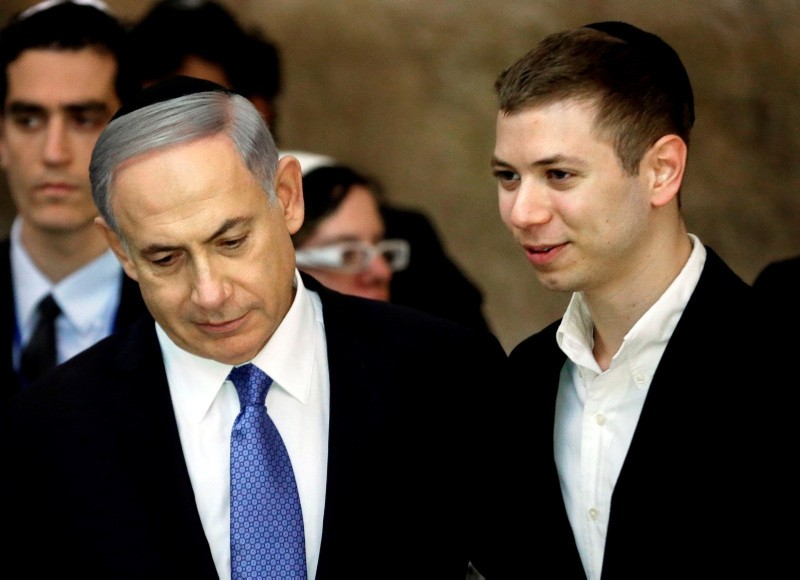 This file photo taken on March 18, 2015 shows Israeli Prime Minister Benjamin Netanyahu (L) and his son Yair visiting the Wailing Wall in Jerusalem. (AFP Photo)
by Daily Sabah May 16, 2018 12:00 am

Israeli Prime Minister Benjamin Netanyahu's eldest son Yair – who has been the main subject of several scandals, like his parents – once again displayed his unique political acumen by crudely insulting Turkey amid a heated diplomatic spat with Israel.

Yair posted a story on his Instagram account showing an image that reads "F… Turkey" written on a Turkish flag with the crescent and star forming the "c" in of the f-word.

The 26-year-old's move was not surprising since he previously insulted fellow Israelis, including former Prime Minister Ehud Barak and opposition leaders, with the same images and rhetoric used by neo-Nazis and far-right movements.

Previously in January, a video recording from 2015 of Yair Netanyahu bragging about his father's controversial gas deals and exposing his lavish lifestyle, including prostitutes, at the expense of taxpayers was aired on the country's top-rated news broadcast.

Yair Netanyahu's post came as the relations between the two countries have hit rock bottom after Israeli soldiers killed 62 Palestinian protesters Monday on the border with Gaza, on the day the U.S. opened its embassy in Jerusalem, in a move rejected by the international community.

Turkey expelled Israeli Ambassador Eitan Na'eh on Tuesday and recalled its ambassadors from Tel Aviv and Washington. Israel responded by demanding Turkish consul general in Jerusalem to leave the country for an indefinite period of time, a move prompting Turkey to demand the Israeli consul general in Istanbul to leave Wednesday.