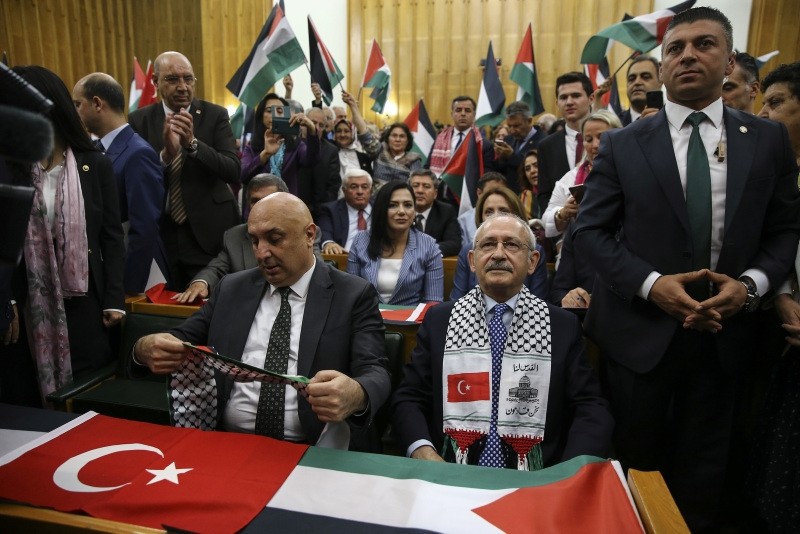 Turkey's main opposition Republican People's Party (CHP) on Wednesday called for international isolation of Israel if it continues its "policy of massacres."

"Israel should be isolated on international sphere if it continues its policy of massacres and if it continues extending illegal settlements on Palestinian lands," said a statement issued by center-left secularist CHP's press branch on Wednesday.

The statement also said that Israel's oppression against Palestinian people is a crime against humanity.

"We should carry into effect our solidarity with Palestinian people in the strongest ways today as Turkey," it added.

Previously on Tuesday, CHP leader Kemal Kılıçdaroğlu has called on the ruling Justice and Development Party (AK Party) to withdraw Turkey's ambassador to Israel during the party's parliamentary group meeting in Ankara.

"It is not enough to recall ambassadors for a briefing. You have declared mourning for three days. There are 60 people who were murdered are over three thousand who were wounded and you only say you recalled the ambassador. No! You have to withdraw the ambassador without return" Kılıçdaroğlu said.

"In order to prove that East Jerusalem is the capital of Israel, you should immediately announce to the world that we declare our consulate as our Embassy," he added.

The CHP leader also called for the dismissal of the deal between Ankara and Tel Aviv, which was approved by parliament in the aftermath of the May 2010 incident on the Mavi Marmara flotilla in which Turkish activists were killed by Israeli security forces.

After the incident, Turkey demanded an official apology from Israel, compensation for the families of those killed and the lifting of the blockade in Gaza.

The deal involved Tel Aviv paying 20 million dollars to the families of the victims as part of a normalization agreement between Turkey and Israel after a six-year hiatus in ties. Israel subsequently delivered the money to the Turkish government, but it has still not been paid to the families of Mavi Marmara victims.

"The deal hurts our pride. So our friends are issuing a draft law today to immediately scrap the humiliating deal," Kılıçdaroğlu said.

"They neither apologized nor lifted the blockade on Gaza. Then the first thing we do after this massacre should be cancelling this deal" he added.

CHP party organization also held rallies in various Turkish cities and towns to protest Israeli violence and Express their support to the Palestinian cause.

At least 62 Palestinians were killed and thousands more injured by Israeli forces along the Gaza border Monday.

Thousands of Palestinians had gathered on Gaza Strip's eastern border Monday to take part in protests aimed to commemorate the Nakba anniversary and protest the relocation of the U.S. Embassy from Tel Aviv to Jerusalem.