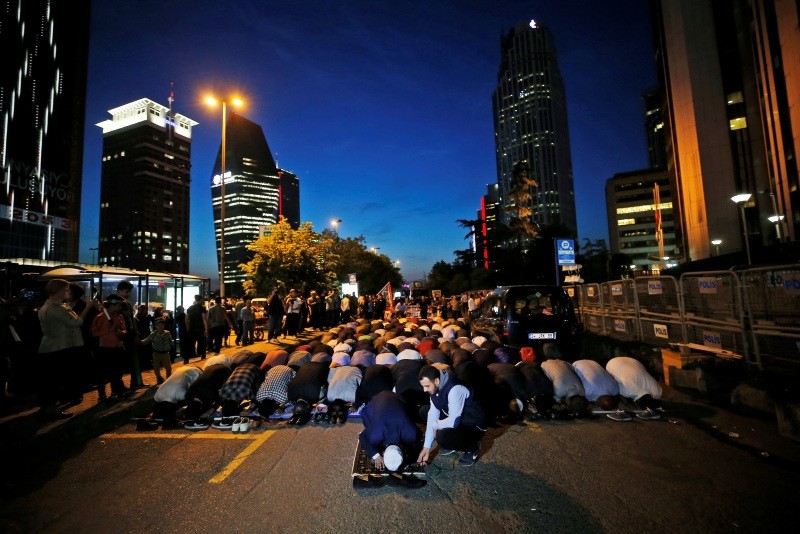 Protesters offer their prayers during a demonstration near Israel's consulate in Istanbul, Tuesday, May 15, 2018. (AP Photo)
by Compiled from Wire Services May 16, 2018 12:00 am

The Turkish Foreign Ministry on Wednesday told Israel's consul general in Istanbul Yosef Levi Sfari to leave the country "for a while".

According to diplomatic sources speaking on condition of anonymity, the ministry told Sfari to leave following indiscriminate violence and killings by Israeli soldiers along the Gaza border.

On Tuesday, Turkish consul general in Jerusalem was asked to leave the country for an indefinite period of time.

In a statement issued by the Israeli Foreign Ministry, Gürcan Türkoğlu was summoned and asked to return to his country, considering latest development on bilateral relation between Jerusalem and Ankara.

At least 62 Palestinians were killed and thousands more injured by Israeli forces along the Gaza border Monday.

Turkey has been among the most vocal critics of the Israeli use of deadly force against protesters at the Gaza border and of the U.S. decision to open its new embassy in a ceremony attended by President Donald Trump's daughter Ivanka and son-in-law Jared Kushner.

President Recep Tayyip Erdoğan described Monday's bloodshed, the deadliest for Palestinians since the 2014 Gaza conflict, as genocide and called Israel a terrorist state. The government declared three days of mourning.

Netanyahu meanwhile told Erdoğan that as a leading supporter of Palestinian group Hamas "there's no doubt he's an expert on terror and slaughter".

In a tweet titled "Reminder to Netanyahu", Erdoğan then denied that Hamas is a terror group, saying it is a "resistance movement that defends the Palestinian homeland against an occupying power".

After talks with British Prime Minister Theresa May on Tuesday, Erdoğan warned that history "will not forgive" Israel or the United States for moving the American embassy to Jerusalem in defiance of the Islamic world.

Thousands of Palestinians had gathered on Gaza Strip's eastern border Monday to take part in protests aimed to commemorate the Nakba anniversary and protest the relocation of the U.S. Embassy from Tel Aviv to Jerusalem.

Turkey has previously expelled Israel's Ambassador Eitan Na'eh and recalled its ambassadors from Tel Aviv and Washington. Erdoğan will on Friday host an emergency summit meeting of the Organisation of Islamic Cooperation (OIC) in Istanbul which he has said will send a "strong message to the world" on the issue.

The dispute appears to mark the worst diplomatic crisis between the two regional powers since Israeli marines stormed an aid ship to enforce a naval blockade of Gaza in 2010, killing 10 Turkish activists and prompting a downgrade in diplomatic ties that lasted until 2016.