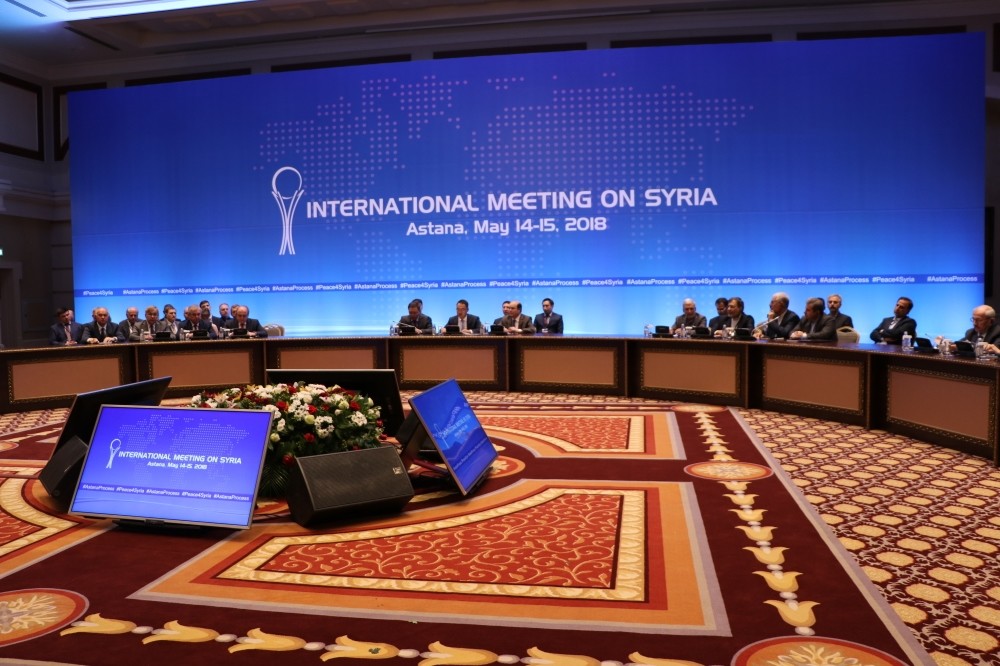 A joint statement on the final day of the Astana talks, which began Monday, confirmed that the next High-Level meeting will be held in Sochi in July.
by Daily Sabah with AA May 16, 2018 12:00 am

During the ninth round of Astana talks yesterday, Turkey, Russia and Iran agreed to continue with the efforts on de-escalation zones in Syria and maintaining the cease-fire between Bashar Assad's forces and the moderate opposition.

The tripartite guarantor states also agreed on holding the next high-level meeting on Syria in Russia's resort city of Sochi in July.

On the final day of the Astana talks, which began on Monday, Kazakh Deputy Foreign Minister Erjan Ashikbaev read out a joint statement by the tripartite countries.

All parties have agreed on maintaining the de-escalation zones and the cease-fire in Syria, according to the joint statement.

The statement also reported that the third meeting of the "Working Group on the release of detainees/abductees and handover of the bodies as well as the identification of missing persons by three Guarantors` representatives with the participation of the U.N. and ICRC [International Committee of the Red Cross] experts" will be held in Ankara in June.

Delegations from Jordan and the U.N. special envoy for Syria Staffan de Mistura were also taking part in the talks as observers, while the U.S. did not participate.

The three guarantor states reaffirmed their commitment to the sovereignty, independence, unity, and territorial integrity of Syria, while maintaining the cease-fire and the de-escalation zones.

The statement also underscored the importance of establishing peace and channels for the rapid delivery of the humanitarian and medical aid.

In addition, the parties agreed also to establish "conditions for the safe and voluntary return of refugees and internally displaced persons to their original places of residence as well as free movement of local population."

Turkey, Russia and Iran are the guarantor countries that brokered a cease-fire in Syria in December 2016, leading to the Astana talks, which are running parallel to the Geneva talks for peace in Syria.

The three countries have carried out negotiations in the Kazakh capital since and agreed on the formation of five de-escalation zones in Syria.

The de-escalation zone agreement envisages the halt of hostilities between Assad regime forces and moderate opposition groups within the zones as well as the creation of conditions for humanitarian access, medical assistance, the return of displaced civilians to their homes and the restoration of damaged infrastructure.

The guarantor states have also agreed to take all measures necessary to continue fighting Daesh, the Nusra Front and other terrorist groups both within and beyond the de-escalation zones.

Whereas the U.N. Security Council resolution adopted unanimously in late 2015 called for a lasting cease-fire and a viable political settlement in the war-torn Syria, the joint statement called for the continuation of political dialogue.

The three countries "in this regard, agreed to hold joint consultations of their high-level representatives with the United Nations secretary-general's special envoy for Syria as well as with Syrian parties in order to create conditions to facilitate the beginning of the Constitutional Committee's work in Geneva as soon as possible and to carry out such meetings on a regular basis," the statement added.

The Astana talks, the parties involved have previously said, are not an alternative to the U.N.-brokered Geneva talks, but rather are a complimentary effort.