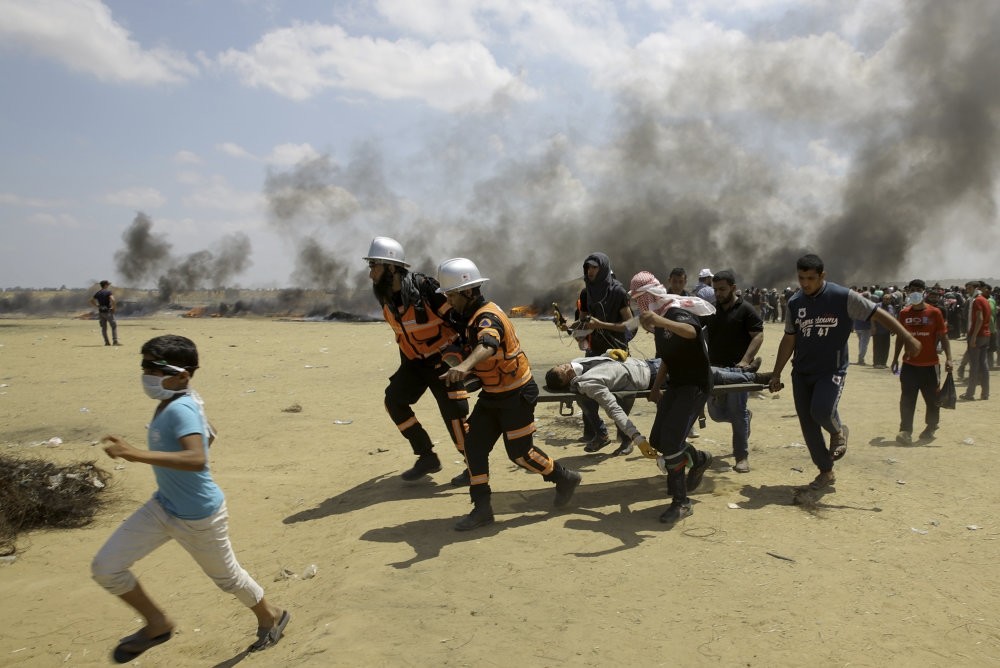 Palestinian medics and protesters evacuate a wounded young man during a protest at the Gaza Strip's border with Israel, east of Khan Younis, May 14.
by Mehmet Çelik May 18, 2018 12:00 am

Turkey, as the term president of the Organization of Islamic Cooperation, calls for Muslim countries to unify against Israeli brutality and have solidarity with Palestinians

The level of participation of the Arab world, mainly Gulf monarchies, is not yet known, though the emergency meeting on Jerusalem in December last year was marked due to the very low level delegations by participants. "The Arab leaders in the region are mostly maintaining their influence in the region with U.S. support. When this is the case, it is not possible for them to stand against U.S. policies in the region, even in a situation as in the Palestinian issue," said journalist Oral Çalışlar, who is also a columnist for Posta daily. The controversial decision by U.S. President Donald Trump on Dec. 6 to relocate the U.S. Embassy in Israel from Tel Aviv to Jerusalem had sparked international criticism. The OIC had also convened then on Dec. 13 in an emergency meeting in Istanbul where the leaders of the Muslim world declared the decision "null and void."

In addition, the OIC declared in a statement following the summit that east Jerusalem was the capital of Palestine "under occupation" and urged the U.S. to withdraw from the peace process and back down from its Jerusalem decision.

However, the lack of high-level participation in the December summit was criticized at the time by President Recep Tayyip Erdoğan.

In an interview with Turkish press in January, Erdoğan said the attendance level of Islamic countries was satisfactory, but too few officials came from members of the Arab League.

"Some countries could very well have sent higher level officials to the OIC summit in Istanbul. It was upsetting to see some Arab League members just going through the motions concerning a summit on Jerusalem." He said over 50 countries attended the summit, with most sending parliamentary speakers, foreign ministers and other senior officials. "For example, Saudi Arabia sent its Islamic affairs minister. It is, of course, important, but still, a more senior official could have been sent," Erdoğan had said, voicing his criticism.

Arab leaders have been criticized by pundits for failing to stand up for the rights of Muslims and instead cooperating with Israel and the U.S.

"How can you expect the regime in Egypt, which came to power with U.S. support, to really stand against the U.S. decision on Jerusalem?" Çalışlar asked.

The U.S. relocated its embassy to Jerusalem on May 14, a day before the 70th anniversary of Israel's establishment in 1948, an event Palestinians refer to as the "Nakba," or the "Catastrophe."

Thousands of Palestinians had gathered on Gaza Strip's eastern border early Monday morning to take part in protests aimed to commemorate the Nakba anniversary and protest relocating the U.S. embassy to Jerusalem. Most of the Palestinians killed on Monday were shot by Israeli snipers, Gaza's Health Ministry said. More than 2,200 Palestinians were also injured by gunfire or tear gas.Among the indiscriminately killed 62 Palestinians was also an 8-month-old baby who died from tear gas inhalation along with eight children under the age of 16. At the Gaza hospital where the body of 8-month-old Laila al-Ghandour was being prepared for burial, her grandmother was quoted by Reuters saying the child was at one of the tented protest encampments. "We were at the tent camp east of Gaza when the Israelis fired lots of tear gas," Heyam Omar quoted by Reuters as saying.

"Suddenly my son screamed at me that Lolo was crying and screaming. I took her further away. When we got back home, the baby stopped crying and I thought she was asleep. I took her to the children's hospital and the doctor told me she was martyred [killed]."Culture and Tourism Minister Numan Kurtulmuş voiced his criticism yesterday about the lack of concrete action by the Muslim world, saying Muslim countries have not fulfilled their responsibilities on Palestine. He said despite the fact that awareness for the Palestinian cause has increased among Muslim people, most of the governments of Islamic countries are refraining from taking responsibility on the issue.Turkish Presidential Spokesman İbrahim Kalın said the OIC summit will focus on mobilizing the international community to bring an end to the oppression of Palestinians.

In a written statement released yesterday, Kalın said the occupation of Israel and the Palestinian issue are not problems for the Muslim countries alone but "common problems for everyone who believe in law and justice.""The summit will focus on the attitudes and actions to be taken by Muslim countries in solidarity and cooperation with the Palestinian State and its people in order to defend the causes of Palestine and Jerusalem," Kalın added.

Prime Minister Binali Yıldırım also invited his three counterparts from Libya, Nigeria and Iraq to the emergency summit, according to prime ministerial sources on yesterday.

After the OIC meeting today, a large rally will take place in Istanbul to protest Israel's treatment of and recent killing of Palestinians.WORLD NEEDS TO TAKE ACTION

Çalışlar added that the Palestinian issue is not only isolated to the Muslim community. "The fundamental right of Palestinians to decide their own future should be a concern for the whole international community," he added.

"The world has witnessed a massacre against Palestinians which indicates the failure of the international system and its institutions," Yaşar Hacısalihoğlu, a professor of political science and international relations and the rector of Yeniyüzyıl University, also told Daily Sabah. He added that the day the U.S. opened its embassy will be remembered as a day Israel indiscriminately massacred Palestinian people.

Turkey also announced three days of national mourning and recalled its ambassadors to Israel and the United States over the violence. In addition, the ruling Justice and Development Party (AK Party), the main opposition Republican People's Party (CHP) and the Nationalist Movement Party (MHP) signed a joint declaration condemning Israel's actions and announcing solidarity with Palestinians following a special session in Parliament Tuesday.Talha Köse, an academic from İbn Haldun University, stated that "Israel has been ignoring international criticism and getting away with its steps at the end of the day."

Trump's controversial Jerusalem decision was also challenged in the U.N. Security Council after a draft resolution on the issue was vetoed 14-to-1, singling out the White House on the decision. Following the U.N. Security Council's move, Turkey and Yemen had also brought the issue to the U.N. General Assembly in a draft resolution, which was passed by 128 for, nine against and 35 abstentions.

After propose a draft to U.N. Security Council on Tuesday, Kuwaiti Ambassador to U.N. Mansour Al-Otaibi said that as an occupying power Israel was required under the Geneva Convention to provide protection for Palestinian civilians but they failed to do that so this is why they want the council to do something about that.