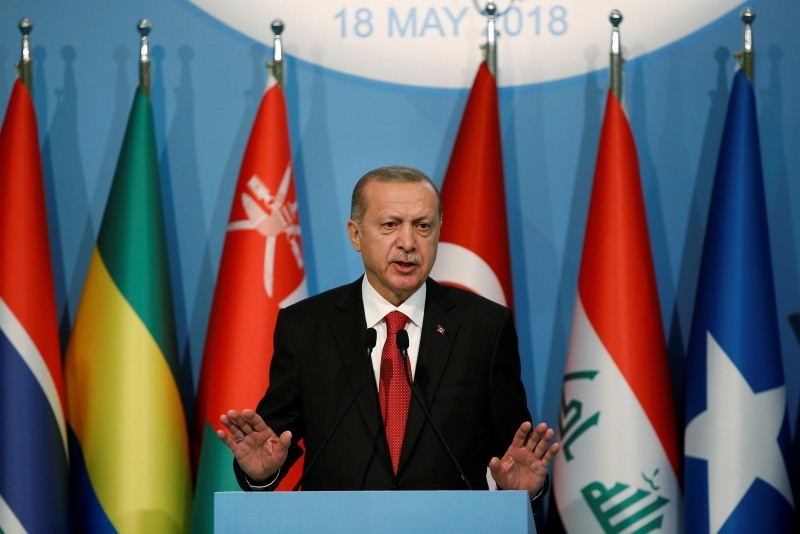 President Recep Tayyip Erdoğan said on Friday that an aid campaign for Palestinians will be carried out during Ramadan across all members states of the Organization of Islamic Cooperation (OIC).

Speaking after the summit, Erdoğan also called for the creation of an international peacekeeping force to protect the Palestinians from Israeli attacks.

Erdoğan said the sending of such an "international peacekeeping force" was essential to help the Palestinians and stop the international community being a "spectator to massacres".

The Turkish president said the OIC will evaluate nations running for international positions and demand support for the Palestinian cause.

Erdoğan emerged as one of the most outspoken critics of Israel after Monday's bloodshed that killed more than 60 Palestinian protesters and injured more than 2,400 in the Gaza Strip.

He called for an international investigation into the crimes Israel has committed. "It will be called to account sooner or later," he said.

The session was also attended by Premier Binali Yildirim and Foreign Minister Mevlut Cavusoglu as well as the heads of states of Afghanistan, Guinea, Iran, Qatar, Kuwait, Mauritania, Sudan, Jordan and the Turkish Republic of Northern Cyprus (TRNC).

Monday's protests in Gaza coincided with Israel's 70th anniversary -- an event Palestinians refer to as "the Nakba" or "the Catastrophe" -- and the relocation of the U.S. Embassy in Israel from Tel Aviv to Jerusalem.

Since mass rallies in Gaza began on March 30, more than 100 Palestinian protesters have been martyred by Israeli army gunfire.

The Istanbul summit was convened by Erdoğan earlier this week to denounce the Israeli violence that martyred at least 62 Palestinians -- the youngest just eight months old -- during mass rallies Monday in the eastern part of the besieged Gaza Strip.

Turkey also carries out the term presidency of the OIC.

The prime ministers of Palestine, Kyrgyzstan and Pakistan took their place at the meeting, while Uzbekistan, Algeria and Sudan were represented at the parliamentary and senate level.

Over 340 national and international accredited press members covered the meeting.

Hours before the international summit, Istanbul also hosted a mass rally under the theme "Condemning Oppression, Supporting al-Quds [Jerusalem]" at the Yenikapi fairgrounds in the European quarter of the city.

Thousands of people attended the mass rally to show support for Palestinians.