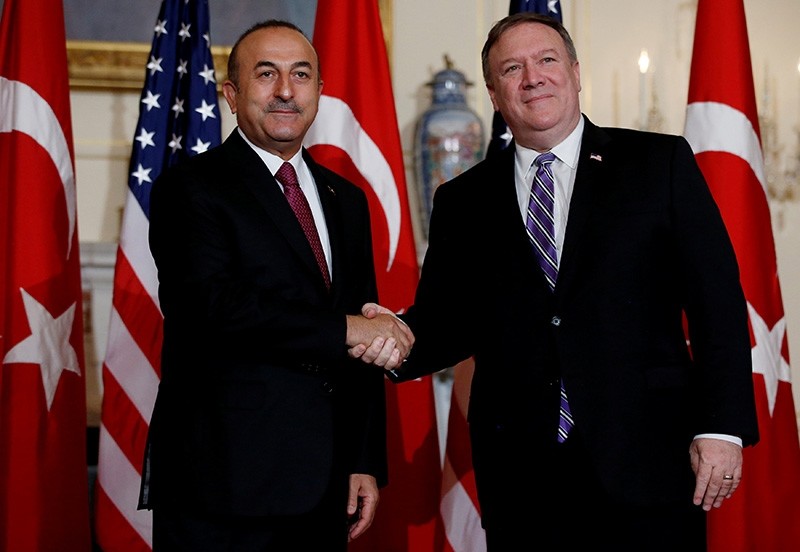 A road map on the future of Manbij has been agreed on following a meeting between Foreign Minister Mevlüt Çavuşoğlu and U.S. Secretary of State Mike Pompeo in Washington on Monday, Ankara announced. This is a new step in Washington-Ankara normalization efforts, which Turkey is expected to take with a grain of salt as the U.S. has failed so far to cooperate against the PKK terrorist group in Syria.

"They [Çavuşoğlu and Pompeo] considered the recommendations of the Turkey-U.S. Working Group on Syria… to include taking steps to ensure the security and stability of Manbij," read a statement released by the Turkish foreign ministry after Monday's meeting.

The statement added that both parties endorsed a road map and underlined their mutual commitment to its implementation, along with closely following developments on the ground.

Speaking after his meeting with Pompeo, Çavuşoğlu said at a separate event in Washington that the meeting, which reportedly lasted about an hour, was "fruitful." He added: "We have achieved considerable progress on the YPG [Manbij]."

Çavuşoğlu added that Turkey expects the U.S. to fulfill its responsibilities on the road map. "We expect concrete results," he said.

Speaking to reporters after a cabinet meeting following the meeting between Çavuşoğlu and Pompeo, Government Spokesperson and Deputy Prime Minister Bekir Bozdağ said Turkey and the United States agreed on a method and timetable for the withdrawal of the YPG from Syria's Manbij.

Shortly after Bozdağ's announcement, Çavuşoğlu told a press conference in Washington that Manbij would be secured by both Turkish and U.S. military forces, while the roadmap would also be implemented in other parts of Syria as well.

Asserting that it was unacceptable for the U.S. to continue supporting the YPG/PYD after today's talks, Çavuşoğlu said that Washington and Ankara will also cooperate on forming a local administration in Manbij.

The minister added that less than six months would be needed for the implementation of the roadmap, but that this duration would depend on the steps taken in the field.

Washington's efforts to normalize ties with Ankara in northern Syria have increased, in particular, following Turkey's Operation Olive Branch with the Free Syrian Army (FSA), launched on Jan. 20 to clear the YPG from Afrin, a province in northwestern Syria under the group's control.

Turkey and the U.S. have established a mechanism to address separate issues in working groups, including stabilization of Manbij and preventing any undesirable clashes, following the visit by former U.S. Secretary of State Rex Tillerson to Ankara in February. The last meeting between U.S. and Turkey officials had taken place in Ankara last week.

Monday's foreign ministry statement also added "an initial session of the Working Group on Judicial and Other Issues took place immediately after the meeting."

Çavuşoğlu and Pompeo held a bilateral meeting last month on the sidelines of a gathering of top diplomats of NATO allies to discuss the situations in Afghanistan, Russia and NATO.

U.S. military and logistical support for the PKK's Syrian affiliate, the YPG, has been one of the most important issues creating a dispute between Ankara and Washington. Washington says the support goes to the Syrian Democratic Forces (SDF), claiming that it is an ethnically diverse entity, as part of the fight against Daesh. However, the fact that the SDF is predominantly led by the YPG has irked Ankara, saying that the existence of the SDF is just a cover for the YPG.

Since the launch of the Afrin operation, Turkey has raised the tone of concerns with regards to the presence of YPG terrorists in Manbij, which was taken by the YPG in 2016, and said they must leave the region.

The U.S. had previously promised Turkey that the YPG terrorists will move from western Syria, including Manbij, to east of the Euphrates River. However, Washington's promise, which was made during former U.S. President Barack Obama's term, has not yet been realized. There are also about 2,000 U.S. troops in Manbij and a dozen U.S. military bases in northern Syria, according to unofficial sources.

Turkey has said that the YPG aims to establish an autonomous region in northern Syria, which Ankara describes as a "terror corridor," and adds that due to the organic organizational links between the YPG and the PKK, such establishments will not be allowed. The YPG's ultimate goal was to connect the northwestern Afrin canton to the Kobani and Jazeera cantons in the northeast. However, Turkey's Afrin operation dealt a significant blow to the YPG's goal, and Turkish officials have said the operations will continue until all terrorists are eliminated from Turkey's borders.