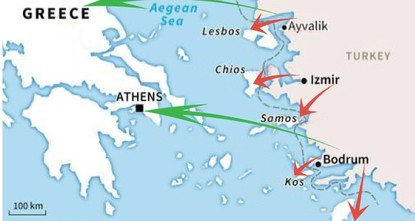 Greece may be challenged with a new wave of refugees as Ankara announced that the bilateral readmission deal has been suspended - a retaliatory step in the row with Athens over Greece's decision to release putschist soldiers who fled Turkey during the 2016 coup attempt.

However, the foreign minister added that the suspension of the readmission deal does not extend to the separate migrant deal between the EU and Turkey signed in March 2016. Çavuşoğlu's remarks came after Greek authorities decided to release putschist soldiers in police custody while they await their asylum applications despite Turkey's demand for their extradition. After the coup attempt in 2016, eight soldiers - two commanders, four captains and two sergeants - escaped to Greece in a Sikorsky helicopter and landed in Alexandroupolis. Following their landing, they asked for asylum from Greek authorities.

"What Greece did is unacceptable. It's Greece that has suffered from a lot from coups. The Greek government really wants to solve the issue," Çavuşoğlu said, however added that there is "a lot of pressure from the West on the Greek judiciary."

Ozan Ceyhun, a columnist for Daily Sabah, said, "Greece has shown that their doors are open for putschists and other Gülenists since they have no intention of extraditing the soldiers."

On July 15, 2016, Gülenist Terror Group (FETÖ) members attempted to overthrow the government and take over the state through a coup attempt. In the events, 250 people were killed and more than 2,200 were injured.

"Ankara's decision can cause a refugee influx into mainland Greece in the mid-run, even if not immediately," Ceyhun said. He added however that, "Ankara's message is indirectly to the EU countries who try to pressure the Greek judiciary."

Turkey's borders with Greece in the northwestern Thrace region are expected to be hit by refugees who would now attempt to cross into Greece to reach other European countries. Of the irregular migrants held in 2017 in Turkey who tried to cross into Europe, the majority came from Pakistan, numbering around 15,000, followed by Afghans, at about 12,000 and Syrians totaled 10,000. 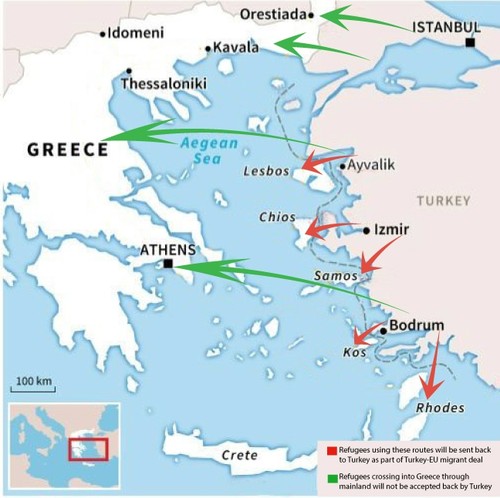 According to reports, some 60,000 asylum seekers are trapped in Greece after European countries started closing their borders one by one in the face of the rising refugee influx.

Turkey has been among the routes to Europe for refugees escaping conflict zones. Particularly after the conflict in Syria, Turkey has faced an influx of nearly 4 million refugees, among which many have attempted to cross into Europe, often risking their lives at sea.

According to the Greece-Turkey agreement signed in 2001, the "irregular migrants" who had crossed into mainland Greece from Turkey would be returned to Turkey and vice versa. However, the deal did not include crossings from Turkey to some Greek islands on the Aegean Sea, another popular route used by refugees seeking new lives in Europe.

However, with the Turkey-EU agreement signed on March 18, 2016, some Greek islets were also included in the readmission agreement to stem the influx of refugees to Europe, putting the readmission deal into full force. With the 2016 deal, the high numbers of crossing and lives lost during the journey have been minimized, officials said.

Turkey's decision to halt the deal was widely covered by Greek media outlets such as Kathimerini, the Greek Reporter and Ta Nea.Greek journalist Stelyo Berberakis told Daily Sabah that the Greek media has been talking about the Turkish "provocation" in terminating the deal.

Berberakis added that Çavuşoğlu's comments on the Greek judiciary's decision "have gone down well with the Greek government."

"The cancellation of the agreement did cause some panic on islands like Mytilene, Chios and Samos; however, it was not the EU-Turkey deal of 2016 that was cancelled, but the bilateral Greco-Turkish 2001 deal on the transfer of refugees originating from non-warring countries," Berberakis added.