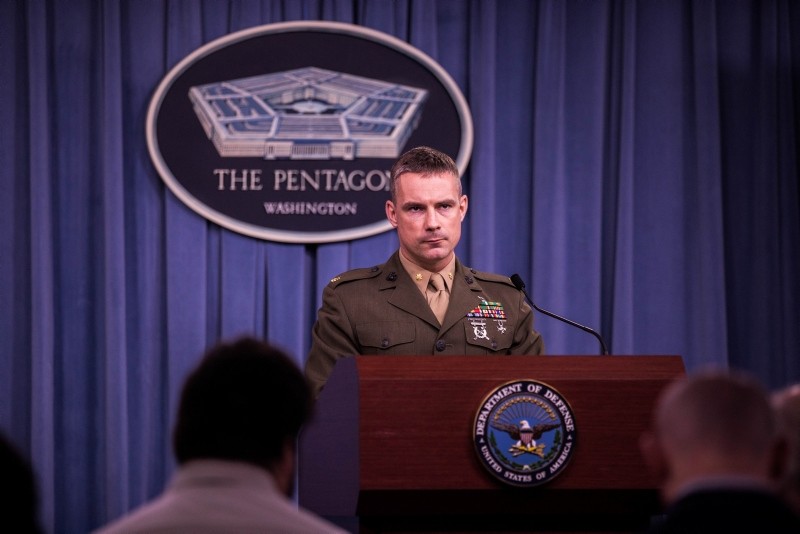 Pentagon spokesman Maj. Adrian Rankine-Galloway receives a question at a press conference at the US Department of Defense in Washington D.C., on June 6, 2018. (AA Photo)
by Ragıp Soylu Jun 12, 2018 12:00 am

A Pentagon statement released Monday revealed that the United States European Command (EUCOM) has been hosting a U.S.-Turkey planning conference in Stuttgart, Germany regarding the contested Syrian town of Manbij. The meetings started Monday and are expected to continue until Wednesday with the participcation of U.S. Central Command (CENTCOM) officials whose operational area includes Syria.

Pentagon spokesman Maj. Adrian Rankine-Galloway said the focus of the conference was to discuss the road map for Manbij, which was endorsed by both Turkish Foreign Minister Mevlüt Çavuşoğlu and U.S. Secretary of State Mike Pompeo last week.

"The U.S. is committed to a sustainable long-term arrangement in Manbij that ensures stability and security, while also addressing the concerns of our NATO ally Turkey. This road map represents a starting point for cooperation with Turkey and our local partners to ensure stability and to promote local governance that is representative of the people of Manbij," Rankine-Galloway added.

Earlier Monday, U.S. Secretary of Defense James Mattis said the two countries would discuss their military force positioning near Manbij and then schedule patrols on each side leading to joint patrols inside the Manbij pocket. There are currently dozens of U.S. soldiers in Manbij, originally dispatched to the area to prevent clashes between Turkish-backed forces and the PKK's Syrian affiliate, the People's Protection Units (YPG).

Last Monday, a Manbij road map was announced after a meeting in Washington between Turkish Foreign Minister Mevlüt Çavuşoğlu and U.S. Secretary of State Mike Pompeo.

Turkey and the U.S. said YPG terrorists will leave the town as agreed and YPG proxies in Manbij's local administration will be also be removed from their positions. There are concerns on the Turkish side that the U.S. might stall the process and escalate tensions even further between the two NATO allies. So far, Turkey has avoided using anti-American rhetoric hoping that the spirit of reconciliation shown by then-Secretary of State Rex Tillerson will continue.

The process is expected to involve a 10-day preparation period that began on June 5, before YPG militants start withdrawing. They will withdraw in 20 days after the preparations are completed, after which time Turkish forces will be deployed to assure peace in the region and train local forces to establish and maintain security. The YPG will be withdrawing to the east of the Euphrates River.

The venue for the Manbij military negotiations – EUCOM headquarters in Germany – also indicates that pro-transatlantic and NATO commanders in the Pentagon will help resolve the Manbij problem.

Various reports indicated that CENTCOM officers were committed to supporting the YPG as a long-term partner and had opposed any concessions given to the Turkish Armed Forces (TSK). However, The American Conservative reported in April that EUCOM Commander Gen. Curtis M. Scaparrotti had warned Pentagon leaders that stable Turkish-American relations were essential for the alliance.

"No one benefits more from the U.S.-Turkey rift than Russia," a NATO partisan and Scaparrotti's colleague told the magazine. "I think Scap has made it clear: The U.S.-Turkey disagreement could well be the greatest political threat to the alliance since France withdrew from the military chain of command back in the '60s."

U.S. military support for the YPG terrorist group in Manbij and elsewhere in Syria has strained ties between Ankara and Washington since former President Barack Obama's term. With Turkey vowing to clear the Manbij of the YPG, fears of military clashes between the two NATO allies had also emerged, since there are roughly 2,000 U.S. troops stationed in the city.