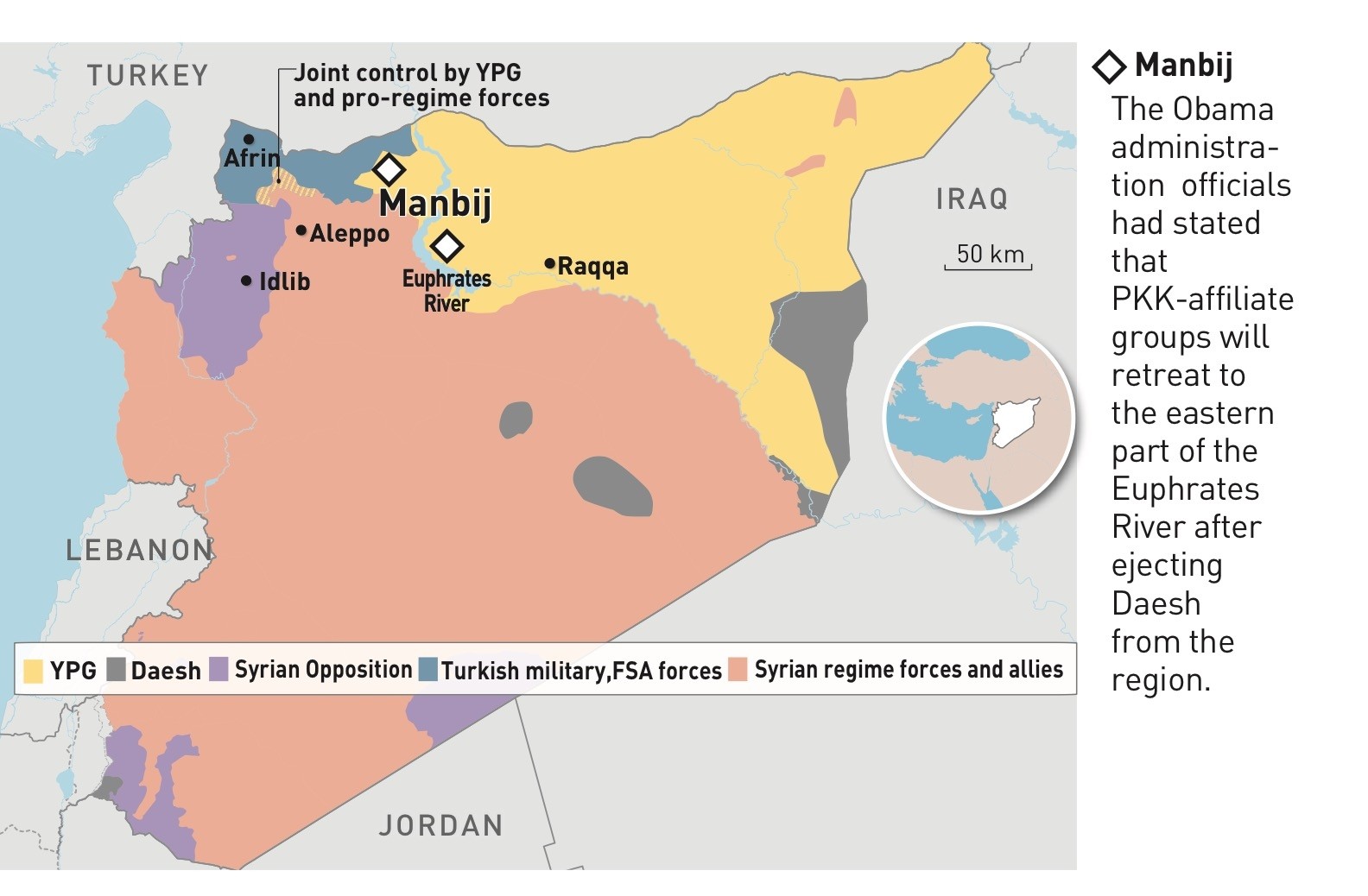 Turkey is satisfied with the recent positive steps taken by the United States to strengthen cooperation and recover relations, which hit historic lows due to the unfulfilled or reneged promises of the Obama administration, particularly on the ending of support to PKK-affiliated groups in northern Syria. As part of an agreement with the U.S., Turkish soldiers on Monday entered the outskirts of Manbij, which was held by PKK's Syrian affiliate the People's Protection Units (YPG), to provide security and assure peace.

Foreign Minister Çavuşoğlu said yesterday that the Manbij agreement is a beginning for the normalization of Turkish-U.S. relations and for re-establishing mutual trust. "The U.S. made serious mistakes towards its ally," the foreign minister said, adding that the agreement is vital for establishing stability in northern Syria and the return of refugees to their homes. Washington's cooperation with the YPG, which was initiated during the Obama administration under the pretext of fighting against Daesh, had been objected to by Ankara. The Obama administration had said the cooperation would end after the defeat of Daesh and weapons given to the terrorist group would be retrieved. Ankara's disapproval didn't stop Washington from delivering more than 1,000 truckloads of weapons to the YPG, including armored vehicles, rocket launchers, anti-tank weapons, mortars, sniper rifles and night vision goggles.

Turkey seized some of those weapons in PKK pits during counterterrorism operations against the terrorist organization in southeastern Turkey. They were also used against the Turkish army during Operation Olive Branch, which was launched by Ankara in northern Syria's city of Afrin in January to evict terrorist from Turkish borders. Also, YPG started to control Manbij, a predominantly Arab-populated town, despite the fact that Obama's officials stated that PKK-affiliate groups will retreat to the eastern part of the Euphrates River after ejecting Daesh from the region.

President Recep Tayyip Erdoğan said before his visit to the U.S. in May 2017 that he sees "what is taking place in Syria as the remnants of the Obama era, with U.S. commanders in the region persisting in following the same policies."

Donald Trump and Erdoğan discussed the issue during the visit and several times since then. Trump said his country will no longer provide weapons to the YPG during a phone conversation with Erdoğan on Nov. 24, 2017. The remarks of the U.S. president were welcomed by Ankara, but Turkish officials emphasized that the U.S. needs to take concrete steps and retrieve the weapons that it had provided to the terrorist group. Washington didn't put an end to the weapons support, but the two countries intensified efforts to find common ground in northern Syria.

As result of these efforts, a Manbij road map was announced after a meeting in Washington between Foreign Minister Mevlüt Çavuşoğlu and U.S. Secretary of State Mike Pompeo in early June. The deal focuses on the withdrawal of the YPG from the northern Syrian city and stability in the region. It envisaged deployment of Turkish forces to assure peace in the region and train local forces to establish and maintain security.

Çavuşoğlu said that the "Manbij model" is crucial for Syria's future and will be implemented in other areas after stability is maintained in Manbij. "The YPG will be evicted from Manbij and their weapons will be retrieved. The area will be returned to its real owners after being cleared," he said.

Eric Pahon, a spokesman for the Pentagon, told Daily Sabah that coordinated independent patrol activities by Turkish and U.S. forces began Monday along the demarcation line north of Manbij in accordance with the Manbij road map and the Manbij Security Principles.

Government spokesman and Deputy PM Bekir Bozdağ said yesterday that Turkey and the U.S. have set a three-month timetable to complete the tasks agreed upon. "While joint work is carried out to liberate the area from terrorists, simultaneous efforts for the administration and the security of the region are being addressed and solved," he said, adding that a new security unit would be established and the city's administration would be handed over to the local people of Manbij

Ankara also signaled an extension of operations against the YPG. Prime Minister Binali Yıldırım said Monday that Turkey will target the terrorist group in Kobani, Haseke and Qamishli after operations are completed in Manbij. He added Turkey's goal is to make the northern Syrian region a safe zone.