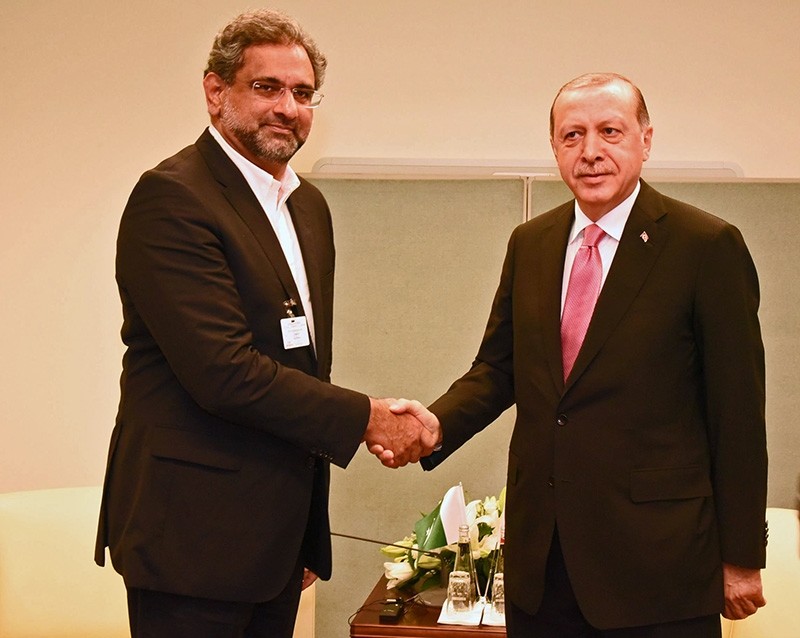 Major political parties in Pakistan have promised to introduce the policies of Turkish President Recep Tayyip Erdoğan to put the country on the path of progress should they win the forthcoming general elections.

Leaders of major political parties like Pakistan Muslim League (Nawaz) and the five-party religious alliance Muttehida Majlis-e-Amal (MMA) are vowing at public meetings to make the country an economic power by following in the footsteps of Erdoğan if they win the elections slated for July 25.

The PML (N) President Shehbaz Sharif, who has already been nominated as the party's candidate for prime minister, posted a tweet with pictures of him and Erdoğan.

Likewise, Siraj-ul-Haq, the vice president of MMA and chief of Jamat-e-Islami, one of the country's two mainstream conservative parties, has promised to bring about a "change" in the country in line with what Erdoğan has done in Turkey.

"Pakistan and Turkey are two great countries. Turkey has climbed the stairs of progress just because they have a leader like Erdoğan. If Pakistanis elect leaders like him, we can also make progress," Haq, who is also a senator, told an election gathering at his home district Dir, which borders neighboring Afghanistan.

Shehbaz, who is the younger brother of the three-time premier Nawaz Sharif observed that Turkey stands at the cusp of historic transition, which will determine its future and solidify the gains made so far.

"President Erdoğan, who is a revered brother and a dear friend to me, has presided over Turkey's transformation ever since the Justice and Development Party (AK Party) took office in 2003," Shehbaz told Anadolu Agency.

"His dynamic leadership has been instrumental in the massive strides Turkey has made over the years. Its solid progress on the path of economic development, democratization and empowerment of the people is owed to the vision of President Erdoğan and the single-minded focus on its translation into reality," he maintained.

Relations between Turkey and Pakistan, he noted, achieved unprecedented heights during Erdoğan's term in office. "He invested his personal energy and commitment to upgrading the bilateral ties," he added.

"President Erdoğan's slogan of social justice in all walks of life captures the spirit of times and lays the foundation of the people's welfare. I believe that post-June Turkey will be pivotal to shaping the regional and global dynamics," he went on to say.

Commending the Turkey's bold foreign policy, Shehbaz noted that Ankara's perpetual solidarity and support for the oppressed – particularly the people of Kashmir, Palestine and Rohingya – is "exemplary" to other nations.

"I wish President Erdoğan all the best in the June 24 elections and pray for his success," he added.

A prayer day was observed across Pakistan on Friday on the appeal of Mufti-i-Azam (Grand Mufti) Pakistan, Maulana Rafi Usmani and other religious scholars to express solidarity with President Erdoğan and his campaign for the presidential election.

"The way he [Erdoğan] has voiced [for] and practically helped the Syrian and Rohingya refugees, is unmatchable. Not only Muslims, but the entire pro-humanity community commend him for that," Usmani said during a Friday sermon in Karachi.

"The entire world is looking to presidential elections in Turkey. Anti-Islam forces have united against Erdoğan, and he needs our prayers at this stage," he said.

"Erdoğan is a ray of hope for the oppressed people who stand alongside him. His re-election simply means the victory of the oppressed across the world," he added.