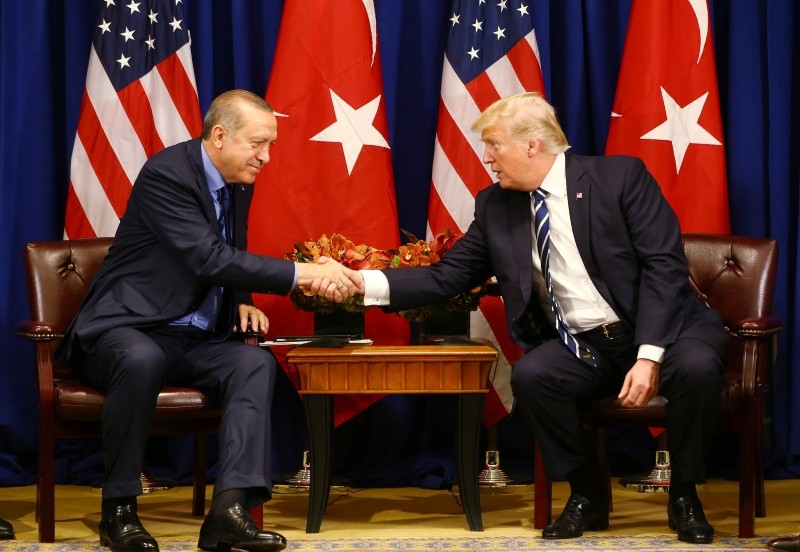 President Recep Tayyip Erdou011fan and his U.S. counterpart Donald Trump shake hands before a meeting on the sidelines of the U.N. General Assembly meeting on Sep. 25, 2017. (Presidential Photo Service via AA)
by Daily Sabah Jun 26, 2018 12:00 am

U.S. President Donald Trump called President Recep Tayyip Erdoğan on Tuesday to congratulate him on his success in the June 24 elections and wished him a successful term, presidency sources said.

Accordingly, the two leaders affirmed their determination to improve bilateral cooperation in every field, primarily in defense and military relations, pointing to the strategic partnership between the two countries.

The importance of implementing the road map on clearing PKK terrorist group and its Syrian wing People's Protection Forces (YPG) from the northern Syrian town of Manbij and asserting joint Turkish-American control in the area, along with working together on the fight against terrorism, was also stressed, they added.

Both Trump and Erdoğan said that they are waiting to meet during the NATO Summit to be held in Belgian capital Brussels on July 11-12.

On Monday, White House spokeswoman Sarah Sanders had confirmed that a call was expected to take place between the two leaders while telling reporters that the U.S. urges Turkey to "take steps to strengthen democracy and continue progress toward resolving issues in the bilateral relationship."