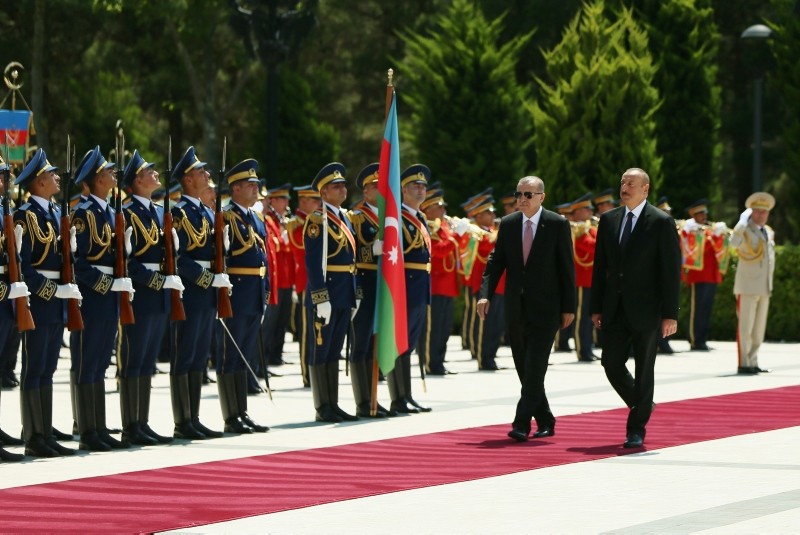 President Recep Tayyip Erdoğan paid a one-day visit to Azerbaijan's capital Baku on Tuesday and to Turkish Republic of Northern Cyprus (TRNC) in his first official visit abroad after his re-election, a tradition followed by previous Turkish presidents as well.

He then visited the Baku Martyrs' Cemetery and Eternal Fire Monument, a complex housing the victims of the Black January massacre, in which more than 150 pro-independence protesters were killed in a violent crackdown by Soviet forces on Jan. 20, 1990.

Erdoğan's next stop was the Baku Turkish Martyrs' Cemetery, which contains the graves of 1,130 Ottoman-Turkish soldiers killed during the campaign to remove Russian troops from Azerbaijan in late 1918.

Later, Erdoğan was welcomed by his Azeri counterpart Ilham Aliyev at the Presidential Palace in Baku, where the two leaders were scheduled to hold a meeting. After their bilateral meeting, delegations from the two countries were to hold a meeting chaired by Erdoğan and Aliyev.

During the meetings, no bilateral agreements were signed, as this was a symbolic visit, although both sides emphasized the desire to strengthen the relationships even further.

Meanwhile, Azerbaijani parliamentary speaker Oktay Asadov emphasized the importance of Azerbaijan-Turkey relations in the region ahead of the visit. "It is a very important part of our country's foreign policy to strengthen and expand relations with Azerbaijan's reliable strategic partner Turkey in the present geopolitical conditions," Asadov told Anadolu Agency (AA) in a statement Monday.

Congratulating Erdoğan on his success in last month's elections, Asadov noted: "Turkey has made great progress under Erdogan's leadership. The implementation of political, economic, social and other projects further strengthens Turkey's position in the international area."

After visiting Baku, Erdoğan moved on to the TRNC, the second stop visited by Turkish presidents as part of tradition following the elections.