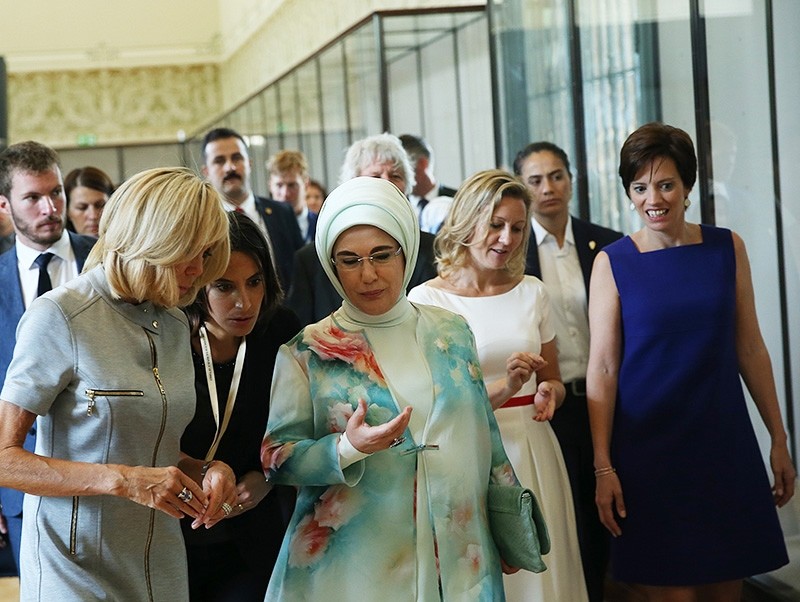 First lady Emine Erdogan (C) chats with French counterpart Brigette Macron at the Royal Museum for Central Africa in Tervuren, near Brussels, on July 12, 2018, on the sidelines of the NATO summit. (AA Photo)
by daily sabah
Jul 12, 2018 12:00 am

First lady Emine Erdoğan explained the plight of Myanmar's Rohingya Muslims to her counterparts in a meeting between first spouses during the NATO Summit held in Brussels this week.

Accompanying her husband President Recep Tayyip Erdoğan at the NATO Summit, Emine Erdoğan toured the Royal Museum for Central Africa in Tervuren in the company of other spouses of state leaders.

Erdoğan took the opportunity to engage in candid conversation with her counterparts. Talking about her visit to Myanmar in 2017, the first lady drew attention to the plight of Rohingya Muslims. She said that Turkey has been caring for oppressed people such as the Rohingya Muslims through both government agencies and with nongovernmental organizations.

Erdoğan also discussed environmental issues with the first spouses, explaining Turkey's successful Zero Waste Project as the group exchanged ideas with each other about how to increase recycling efforts and waste reduction.

After exchanging ideas about how to reduce waste and increase recycling efforts, Erdoğan and French first lady Brigitte Macron had a frank conversation about the dangers and negative influences of exposing children to technology without supervision.

The NATO summit, held July 11-12 in Brussels, Belgium, is President Erdoğan's first international summit since being reelected to a five-year term in Turkey's June 24 elections.