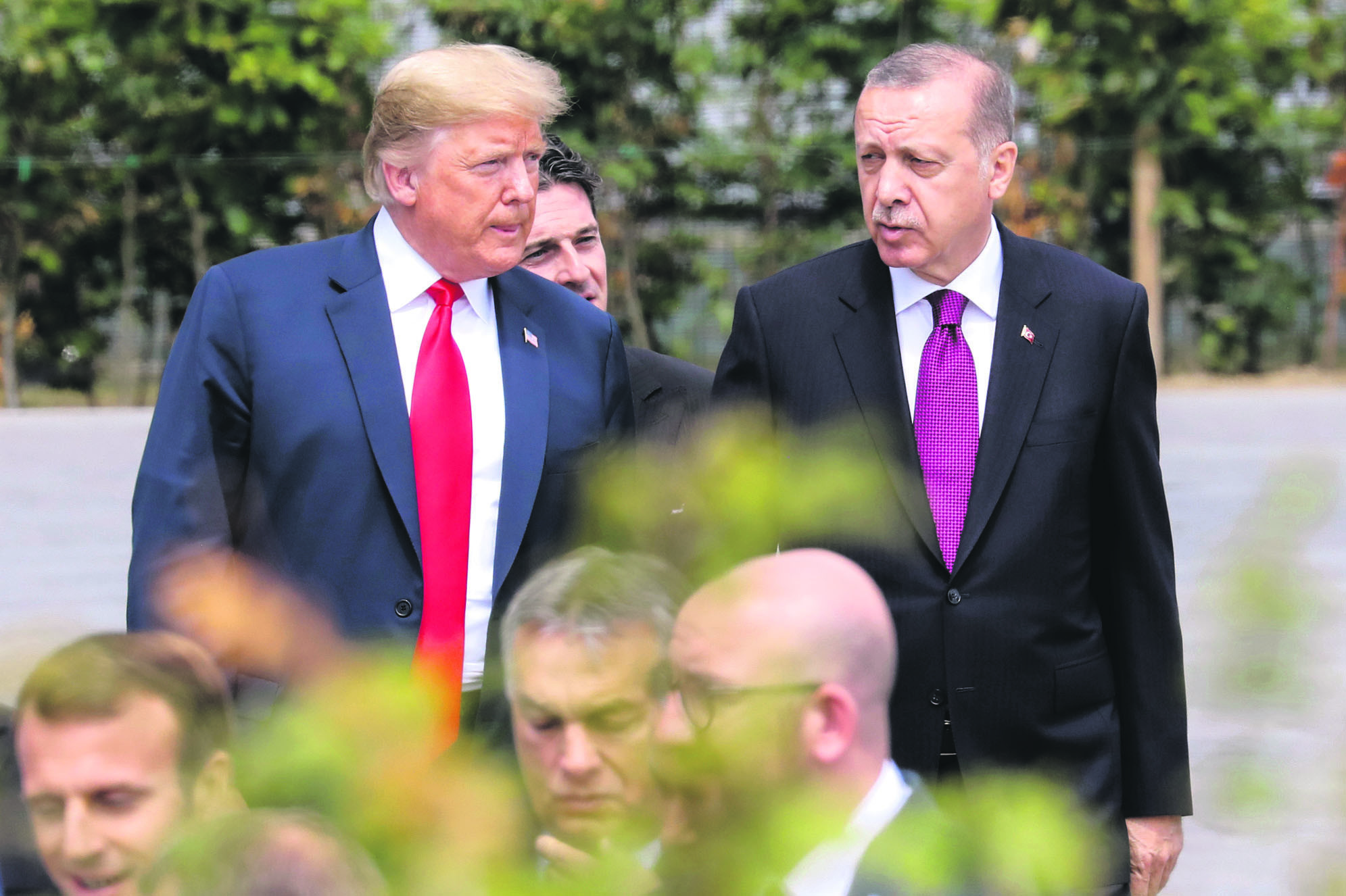 President Recep Tayyip Erdou011fan speaks with U.S. President Donald Trump ahead of the opening ceremony of the NATO summit, July 11.
by daily sabah
Jul 12, 2018 12:00 am

Apart from discussing Turkey's counterterrorism efforts, Erdoğan also held meetings with some of the world leaders on the sidelines of the two-day NATO summit in Brussels

The two-day meeting started with NATO Secretary-General Jens Stoltenberg's official ceremony to greet visitors in the bloc's headquarters in Brussels.

On the sidelines, Erdoğan had a small conversation with Greek Prime Minister Alexis Tsipras and Hungarian Prime Minister Viktor Orban in the exhibition. Erdoğan was seen conversing with Trump in what was reported as a warm atmosphere, while the leaders were walking the area, where they watched air force demonstrations.

In a session, to be held with the heads of states from Georgia and Ukraine in attendance, improving relations between NATO and those countries will be discussed. Additionally, matters pertaining to ongoing tensions between the EU and the U.S., moving the U.S. Embassy to Jerusalem, Iran and climate agreements are expected to be discussed in the summit.

Erdoğan held a bilateral meeting with German Chancellor Angela Merkel yesterday. The Turkish president was also expected to meet the British Prime Minister Theresa May after his meeting with Merkel.

During the meeting, Çavuşoğlu said Turkey will receive its first delivery of the Russian S-400 missile systems by late 2019. "The first batteries will be delivered toward the end of the next year," Çavuşoğlu told reporters.

Çavuşoğlu said that besides the U.S., some other NATO member states have also questioned the purchase, but that this must end.

"We understand the technical part. For example, it's normal for them to ask whether the S-400 recognizes NATO, NATO systems or allies as enemies. We are also sensitive to this issue," he said.

However, he added that Turkey had to meet its defense needs and seek alternatives in the absence of support from Ankara's Western allies.

Turkey's decision to purchase S-400 air missile defense systems from Russia will be among the issues discussed during Erdoğan's meeting with NATO leaders. Ankara has been disappointed with NATO allies for not supporting Turkey's fight against terrorism and the lack of cooperation in meeting Turkey's defense needs.

"We have already laid down our conditions in this regard while making the purchase," Çavuşoğlu added.

Last December, Turkey announced it had concluded an agreement with Russia for the purchase of two S-400 systems by early 2020. This April both parties agreed on the early delivery of the systems, which cost Turkey $2.5 billion.

The S-400 is Russia's most advanced long-range anti-aircraft missile system, with the ability to carry three types of missiles capable of destroying targets, including ballistic and cruise missiles.

In June, the U.S. Senate passed a bill prohibiting sales to Turkey of F-35 jets, citing the S-400 purchase as well as Turkey's detention of U.S. citizens.

Çavuşoğlu also rebuffed claims that Turkey is turning away from NATO. In recent years, Ankara's rapprochement with Russia and other eastern countries has been interpreted as a shift away from its Western allies. However, Turkish officials have said that this is not the case, but rather, the policy changes are a result of Turkey not putting all its eggs in one basket.The alliance is also expected to affirm its support to Afghanistan. The summit will also affirm NATO's "open-door policy" in the Euro-Atlantic region for peace and stability. Stoltenberg said that the bloc looks to create a peaceful and secure environment from the Pacific Ocean to the Black Sea with its 29 members.

During the summit, an agreement is expected to be reached regarding the Turkish military providing training in Iraq. As part of NATO's military training project in Iraq, military schools and academies will be built. Turkish military authorities will train the Iraqi army on how to put forward effective combat strategies against PKK and Daesh terrorists. Stoltenberg was quoted by Doğan News Agency on Monday as saying that Turkey is also preparing to take on a new, bigger role in the transatlantic alliance with a task to command the Very High Readiness Joint Force (VJFT) in 2021 along with France, Germany, Italy, Poland, Spain and the United Kingdom.

NATO was formed in 1949 to counter the threat of post-war communist expansion as the Soviet Union sought to extend its influence in Europe. The aim is to keep Europe safe by deterrence, a cornerstone of which is the United States' permanent commitment to protect the continent's security.