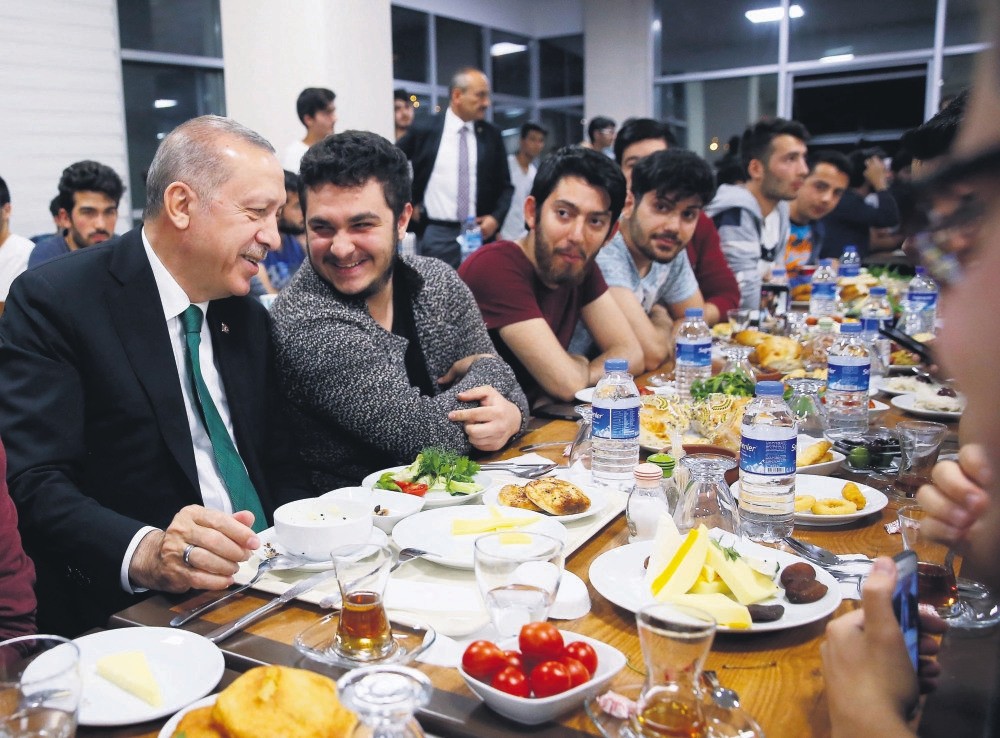 President Recep Tayyip Erdou011fan during a sahur meal with students in Ramadan, the Muslim's holy month of fasting, June 4.
by daily sabah
Jul 12, 2018 12:00 am

President Recep Tayyip Erdoğan is one of the most active and influential world leaders on social media, particularly on Twitter and Periscope, having a huge number of followers, likes and follower engagement, a report reveals.

Global public relations and communication company Burson Marsteller released its "Twiplomacy 2018" report on Wednesday in which the social media activities of the world leaders were analyzed. Among all the social media platforms, Periscope is the one where Erdoğan shines the most with 9.7 million likes and more than 112,000 followers, which makes him the number one leader on Periscope. Erdoğan is followed by French President Emmanuel Macron with 32,000 followers and 2.3 million likes. On Twitter, however, U.S. President Donald Trump has the largest number of followers with 52 million. Trump is followed by Catholic leader Pope Francis and Prime Minister of India Narendra Modi. Erdoğan, however, has the 7th biggest number followers among 951 other accounts with 12 million followers. The most re-tweeted leader on Twitter is the King of Saudi Arabia Salman bin Abdulaziz with an average of 154,000 retweets. The most active political account on the social media platform, however, is the Presidency of El Salvador with an average of 78 tweets per day.

During the election, Turkish leaders, particularly Erdoğan, used social media heavily, especially to attract young voters. Erdoğan, for instance, joined youths for a sahur meal at a student dormitory in the capital Ankara after receiving a sahur invitation from a student via Twitter on June 1, saying that he is "coming if the tea is ready," and the president posted a video of the meal he had with students in the dormitory.

Main opposition Republican People's Party (CHP) candidate Muharrem İnce was also particularly good at using his Twitter account as a campaign tool. His tweets mainly focused on education, particularly on sending well wishes to students before their college or high school entrance exams, as well as touching on the problems that students of every age might face. He also shared a video of himself riding a bicycle on his Twitter account