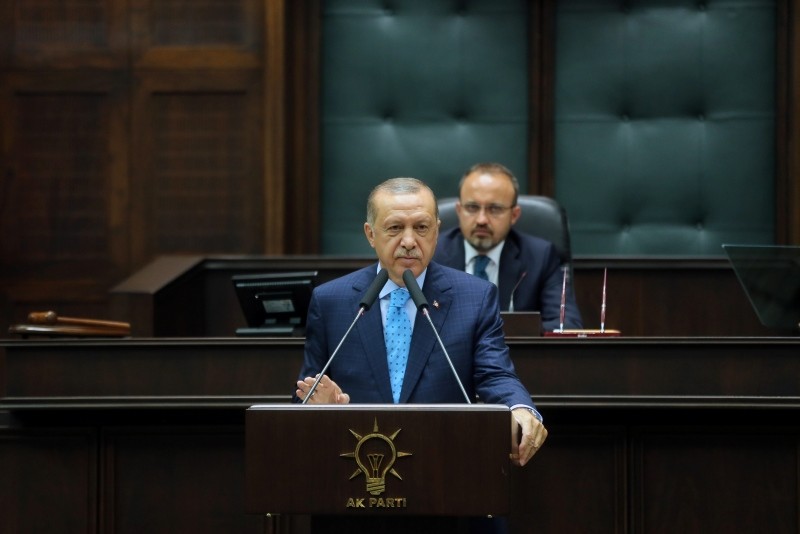 Israel is the most fascist and racist state on the face of the earth, President Recep Tayyip Erdoğan said Tuesday, referring to a bill approved last week in the Israeli parliament that described Israel as "the nation-state of the Jewish people."

Addressing the Justice and Development Party (AK Party) parliamentary group meeting, President Erdoğan slammed Israel for approving the controversial bill. "This law is evidence that, without doubt, Israel is the most Zionist, fascist, and racist state in the world," he said. "I call on the Islamic world, Christian world, all democratic and liberal states, nongovernmental organizations and members of the media to move against Israel," he added.

Last week, the Knesset approved the law, calling Israel "the nation-state of the Jewish people." Also, the Arabic language was removed from the official languages of the state. Furthermore, the law supports the Israeli settlements. Jerusalem was also considered as the complete and unified capital city of the state of Israel, falling away from U.N. resolutions.

Erdoğan said that Israel's attacks on Palestinian territory, especially in Jerusalem and Gaza, are precisely a crime against humanity. Erdoğan said that "The real grievous thing is that the world has come to ignore the thousands of Palestinians killed by Israel and the Palestinians who have been injured. But almost everybody has taken action for a single Israeli soldier who has lost his life."

The president stressed that the law lays the intentions of the Israeli state bare. Underlining that all unjust practices, pressures and secrecy against Muslims and Christians visiting Gaza were legitimized by this law, Erdoğan said that Israel invented a cover for the violence that they have been spreading in the region.

"The soul of Hitler that dragged the world into a disaster has revived among some of Israel's rulers. As the Israeli president has correctly stated, this is a step in the way of putting all Jews in danger, far from offering a homeland to the Jews in the world," the president said.

"Turkey under Erdoğan is becoming a dark dictatorship, while Israel is meticulously maintaining equal rights for all its citizens, before and after the law."

His remarks were quickly responded by Presidential Spokesperson Ibrahim Kalın said Netanyahu is in position to lecture Erdoğan on human rights.

"The prime minister of a Zionist apartheid state, built on racism, occupation, and displacement, is in no position to lecture our president on human rights," Kalın wrote on his official Twitter account.

"Turkey's criticism against the Nation State Law, a shameless attempt to institutionalize discrimination against the Palestinian people, is a universal call for justice and peace. Mr. Netanyahu may not know the meaning of these words but the world is aware of what is happening," Kalın added.

The law passed with a 62-55 backing in the Israeli parliament, with two members of the Knesset, Israel's parliament, abstaining. The legislation is defined as a "basic law," granting it quasi-constitutional status. However, it will likely face a challenge in the Supreme Court. Politicians took turns to passionately express their views for and against the bill in a rowdy, hours-long debate in parliament.