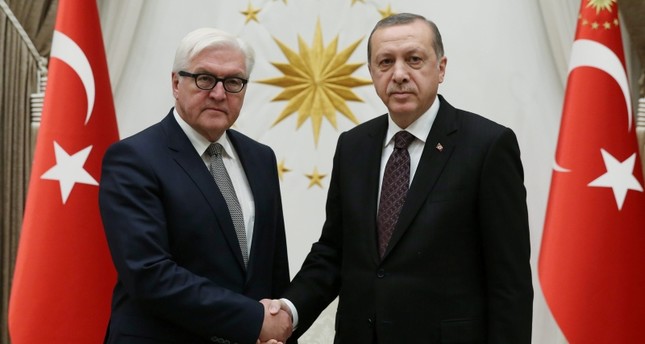 The state visit includes a reception by the German president with military honors and a formal state banquet.

No immediate comment was available from the German or Turkish governments.

It would be Erdoğan's first official visit to Germany since 2014, and his first since taking over the Turkish presidency, the mass circulation daily said.

Plans for the visit reflect efforts to rebuild relations between Germany and Turkey after ties soured in a series of disputes.

Last year there was controversy over political rallies in Germany ahead of a Turkish referendum on a change to the constitution granting greater powers to the president.

German authorities had banned the ruling Justice and Development (AK) Party from organizing campaign events on security grounds, but tolerated those of opposition parties. The Turkish government responded by accusing Germany of using "Nazi methods."

German politicians have been outspoken critics of Turkey's security crackdown since the coup, which saw of thousands of Turkish nationals jailed over links with the Gülenist Terror Group (FETÖ), including around a dozen German nationals in the probe targeting various terror groups.

Ankara has criticized Berlin for not handing over asylum seekers it accuses of involvement in the failed coup, which led to the deaths of 250 people while injuring 2,200 others

Share on Facebook Share on Twitter
Previous in Diplomacy A certain discord and lack of coordination may be behind the White... Next in Diplomacy Amid high-running tensions between the U.S. and Turkey over jailed...
DAILY SABAH RECOMMENDS