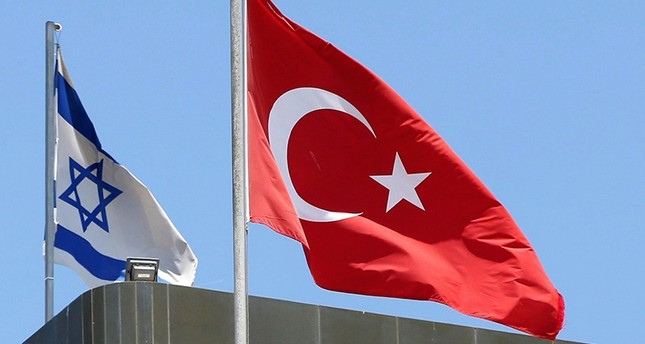 Continuing its deterrent policy against Turks visiting sacred sites, Israel blocked the entry of 72 Turkish tourists who had arrived for a package tour on the grounds that they did not have visas, despite the fact that their Turkish tour company said they had received a collective visa

Israel's policy to deter Turks from visiting sacred sites in Jerusalem has most recently targeted a group of Turkish tourists. On Sunday, the country denied entry to 72 Turkish citizens on the grounds that they did not have visas, the Turkish tour operator bringing them to Israel announced.

Mustafa Biçkioğlu, a representative of the Turkey-based Sila Tour company, told Anadolu Agency that Israeli police did not allow entry to the Turkish citizens after they arrived at Tel Aviv's Ben Gurion Airport; the tourists were planning to visit Jerusalem.

Biçkioğlu rejected the visa condition claim and said the tour company had in fact received a collective visa for the group.

"Israel does not provide separate visas for each passenger to tour companies that bring tourists to Jerusalem," he explained.

"The document issued by the consulate works as a visa for all passengers. We had received a visa letter in Hebrew for our passengers for travel on our Jerusalem tour but our 90 passengers were not allowed to enter Israel for allegedly not having visas," he said.

He said 15 passengers were later sent back to Istanbul while another 33 were expected to be deported. The other passengers will be deported -- depending on seat availability -- the following day, he added.

One of the tourists, Sümeyra Sevgülü Hacıibrahimoğlu, who is a 23-year-old masters student, told Anadolu Agency that Israeli officials had treated them as fugitives.

"After questioning some of our friends in the security inquiry room, we were taken to different rooms in groups," she said.

"Some of the families among us wanted to be in the same room but Israeli police rejected this request," she added.

Hacıibrahimoğlu said she went to Israel to visit al-Aqsa Mosque in Jerusalem.

"The only dream of the group that consists of mainly young people was to see Jerusalem," she added.

Turkey's embassy in Tel Aviv is in contact with passengers and is closely following the issue.

Ahsen Eflatun, another Turkish tourist denied entry to Israel, said they had visas but were subject to mistreatment.

"They told us that we did not have visas. They took our photos and fingerprints repeatedly. Israeli officials later told us some had indeed valid visas and visas for others were canceled. They gave us contradicting accounts [about why they were denied entry]. This is what Israel did before to other people. This is a policy," Eflatun said. She said they were also separated from their tour guide. "We were left in the dark most of the time; they did not explain why we were held for a long time," she said.

Jerusalem has seen a rising interest among Turkish visitors, especially after the controversial U.S. decision to relocate its embassy to the city. Showing solidarity with the Palestinians against the Israeli occupation of East Jerusalem where the sacred Muslim sites Al-Aqsa and the Haram al-Sharif are located, Muslims, particularly Turkish citizens, have been flocking to the city.

Israel's informal policy of deportation, visa rejection, arbitrary detention and keeping Turkish nationals waiting for no reason at airports have failed to discourage hundreds. In June, Israel arrested 27-year-old Ebru Özkan, one of 38 Turkish tourists visiting Jerusalem. She had concluded visiting Jerusalem as part of a package tour and was about to fly home on June 11 when Israeli police detained her at Tel Aviv's Ben Gurion Airport.

She was the latest person to be taken into custody by Israel, which deems anyone sympathizing with Palestinians a threat and randomly detains Muslim tourists, particularly from Turkey, visiting Jerusalem. She was released and returned to Turkey earlier this month.

Her arrest raised a public outcry in Turkey where Israel is already at the heart of public anger over its treatment of Palestinians. It also brought Israel's intimidation of Muslims back into the spotlight. She was arrested on charges of helping "terrorists," a blanket term used by Israel to describe groups opposing Israel's blockade of Palestinian territories, by bringing five bottles of perfume from Turkey to Israel and handing them to an unidentified Palestinian. She was also charged for giving a cellphone charger to another person.

She was not the first Turkish national to be detained by Israel. Since last year, Israeli police briefly detained at least four others on different occasions. Although Israel detains people from other nationalities as well, Turkish citizens make up most of the headlines as Ankara is the most outspoken critic of Tel Aviv for its policies against Palestinians.