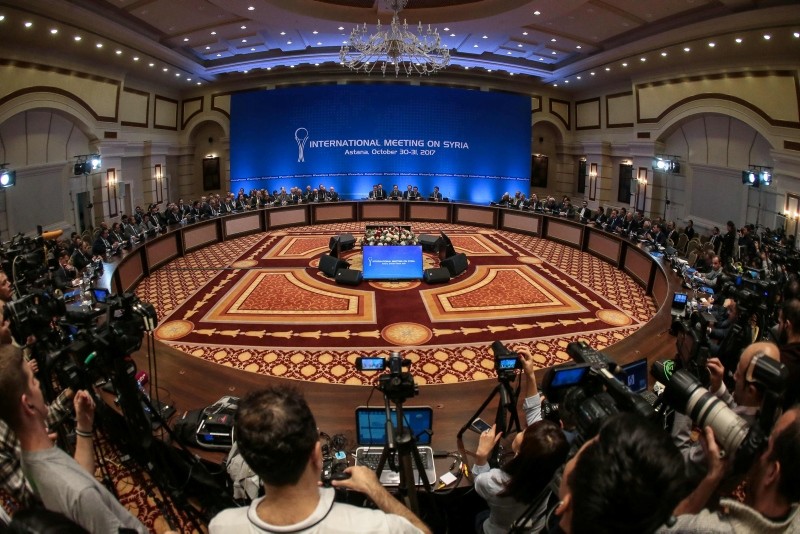 Representatives of the Syria Regime and rebel groups along with other attendees take part in the session of Syria peace talks in Astana on October 31, 2017. (EPA Photo)
by Daily Sabah with AA Jul 30, 2018 12:00 am

Officials from Turkey, Russia and Iran held technical talks on Monday in Sochi, Russia, ahead of a 10th round of Syria peace talks in Astana, Kazakhstan, slated for July 31.

The Astana talks will address the latest situation in de-escalation zones in Syria's Idlib, the return of the refugees, the release of prisoners and the formation of a committee that will rewrite Syria's constitution.

Officials from the U.N. and Jordan are taking part in Monday's talks as observers while the U.S. once again opted not to send a representative.

The first nine guarantors meetings were held in the Kazakh capital Astana. Monday, committees carried out a preliminary discussion, holding bilateral and trilateral meetings on technical issues. The main session will be carried out Tuesday with the participation of all sides of the conflict and guarantor states.

One of the top issues expected to be discussed at the meeting is the latest situation in the northwestern Idlib province, which has been turned into a shelter for opposition fighters and their families who were evacuated from different parts of the war-torn country. In an interview with the Russian TASS news agency on June 27, Bashar Assad said that Idlib is one of the top priorities of regime forces, which recently regained control in swathes of the country. During last week, regime forces reportedly scaled up military presence around Idlib with a large amount of new deployments.

Idlib is one of the de-escalation areas designated in the Astana talks, therefore, Ankara had warned the Assad regime and its allies to refrain themselves from a possible offensive in the province. Turkey is wary of an offensive due to fears of it triggering a new refugee wave in Idlib, as well as in the areas liberated with Operation Euphrates Shield and Operation Olive Branch, toward the Turkish border. The Turkish Armed Forces (TSK) established 12 observation posts to maintain stability in the opposition town.

The guarantors are also expected to discuss a return of refugees, who have been internally and externally displaced during the seven-year war. Russian officials made visits recently to Turkey, Jordan and Lebanon, where most of the Syrian refugees have been sheltered. According to U.N. figures, around 6 million people have been displaced internally and another 5 million were driven abroad as refugees.

Efforts on a new constitution, which is regarded as one of the most crucial topics in order to find a permanent solution to the war, is also on the table in today's convention. The U.N. special envoy for Syria Staffan de Mistura will come together with representatives of guarantor countries on the issue. Delegations of the opposition and Syrian regime had presented their proposals to de Mistura in previous meetings.

The issue of exchange of detainees is also expected to come into agenda in Tuesday's meeting. The Turkish delegation is reportedly determined to give a strong message on the issue.

The Syrian civil war erupted in 2011 when the Assad regime harshly responded to protesters who had poured into the streets to demand more rights and freedom. The protests initially emerged following the Arab Spring demonstrations that resulted in strongmen in Egypt, Tunisia and Libya stepping down. The cruelty against protesters triggered into a rebellion in significant parts of the country, turning into a brutal civil war. So far an estimated 500,000 people have been killed in the war.