US preparing list of sanctions against Turkey over Brunson case: report 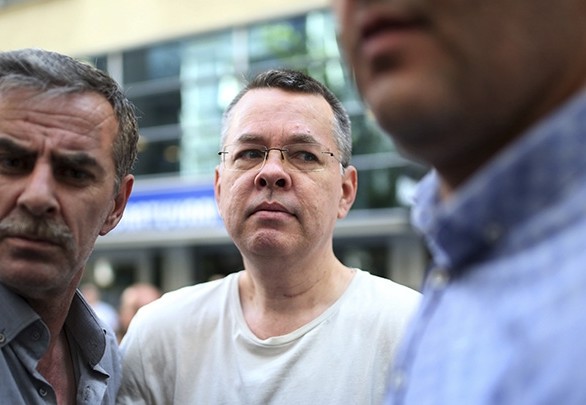 The U.S. has prepared a list of Turkish entities and individuals that could be targeted by sanctions in retaliation for Turkey's detainment of terror-linked American pastor Andrew Brunson, a report by Bloomberg said Wednesday, citing two people familiar with the matter.

The preparation of "designation packages" is reportedly in response to the Turkish government's detention of certain U.S. citizens, Brunson being the most high profile, and employees at its diplomatic missions, including Turkish national Metin Topuz who has since admitted connections to Gülenist Terror Group (FETÖ).

According to the unnamed sources, the sanctions resemble those the U.S. imposed on the Russian government and tycoons with connections to President Vladimir Putin.

The U.S. has taken up the tactic of threats to attempt to coerce Turkey into making a decision. Ankara asserts that Brunson's case, along with others, is a matter of the Turkish judiciary apart from political will.

Despite strong-worded and reiterated threats from U.S. President Donald Trump and Vice President Mike Pence, the U.S. has continued to push back its demanded deadlines for the release of Brunson, Turkish and U.S. officials informed of the talks told Bloomberg.

Before any sanctions could be implemented, they would need to be approved by the U.S. Treasury secretary and the secretary of state.

The U.S. claims it has the right to impose sanctions under the Global Magnitsky Act of 2016, which permits the government to target entities that participate in human rights violations or corruption anywhere in the world. The act allows for travel bans, seizure of U.S. assets and prohibitions on conducting business with U.S. entities.

It was first adopted to punish the Russian government for the death of tax accountant Sergei Magnitsky in a Russian prison in 2009.

On Tuesday, a Turkish court rejected an appeal for Brunson to be released from house arrest during his trial.

Brunson, who was previously jailed for his links to FETÖ and the PKK, was released on July 25 following an appeal by his lawyer, who objected his extended detention in an earlier hearing, citing health problems the 50-year-old defendant suffers from.