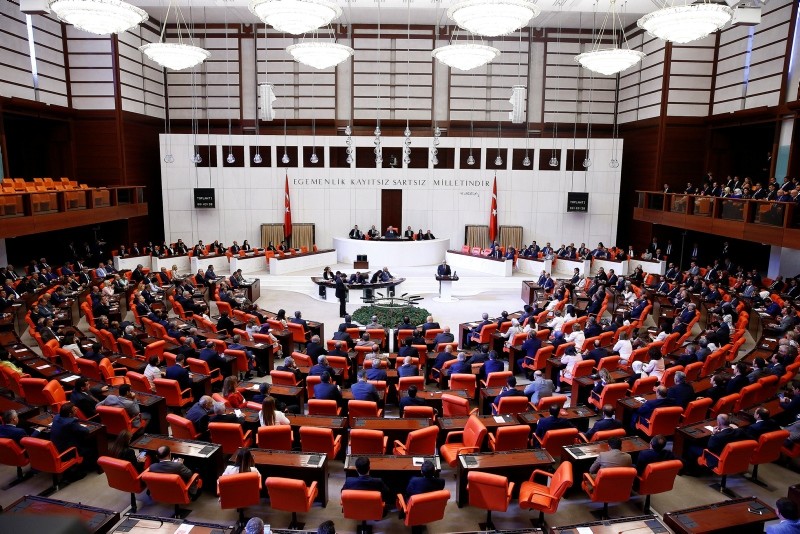 "We say 'no' to the U.S. threats with common solidarity and determination of our nation," said the Justice and Development Party (AK Party), the main opposition Republican People's Party (CHP), the Nationalist Movement Party (MHP) and the Good Party (IYI Party - IP) in a joint statement.

It added that it was the right of the executive body, or presidency, to give the necessary response to the U.S. based on the principle of international reciprocity.

Earlier, Foreign Minister Mevlüt Çavuşoğlu said the "U.S. attempt to impose sanctions on our two ministers will not go unanswered."

One of the ministers targeted for sanctions, Justice Minister Abdulhamit Gül, said on his Twitter account that he does not own any property or have money outside Turkey.

Previously, White House spokesperson Sarah Sanders said the U.S. would impose sanctions on Turkey's ministers of justice and interior for not releasing American Pastor Andrew Craig Brunson, who faces terrorism charges in Turkey and is accused of backing a coup attempt two years ago.

Sanders said the U.S. would block the properties, if any, of the two ministers.

In a written statement published Wednesday, the U.S. Treasury Department said Gul and Minister of Interior Süleyman Soylu "played leading roles in the organizations responsible for the arrest and detention of Pastor Andrew Brunson".

According to U.S. law, those mentioned on the sanctions list will have any of their assets and properties under U.S. jurisdiction blocked and American businesses and individuals will be prohibited from engaging in financial transactions with them.

Brunson has been charged with spying for the PKK -- a designated terrorist group in the U.S. and Turkey -- and the Gülenist Terror Group (FETÖ), the group behind the defeated July 2016 coup attempt in Turkey which killed 251 people and injured thousands.

The American pastor was arrested in October 2016. The Izmir 5th Penal Court of Peace on Dec. 9 of that year ordered Brunson's continued detention pending trial.

On July 25, the 2nd High Criminal Court in Izmir decided to turn Brunson's detention into house arrest in light of his health problems.

Izmir Public Prosecutor Berkant Karakaya's indictment stated that Brunson acted in accordance with terrorist groups' strategies under the pretext of being a man of religion. It added that Brunson knew the aims of such groups and yet still willingly cooperated with them.

In the indictment, Brunson was mentioned as getting in touch with FETÖ's high-ranking members using their aliases. He was accused of determining his strategies by getting in touch with FETÖ fugitives Bekir Baz, his assistant Murat Safa and Amnesty International's Turkey branch head Taner Kıılıç, who is awaiting trial in prison for "being a member of an armed terrorist group".

In the technical investigation, 293 close GSM signals were detected from Brunson with fugitive Bekir Baz.

The indictment also mentions a message Brunson sent to a U.S. soldier expressing sadness over the July 2016 defeated coup.

The text message said: "We were expecting an earthquake to shake the Turkish nation. The conditions returning to Jesus were met now. Many Turks relied on the military like in the past, but this time it was too late. Another blow after the coup attempt. I think the situation is going to get worse. We'll win at the end."