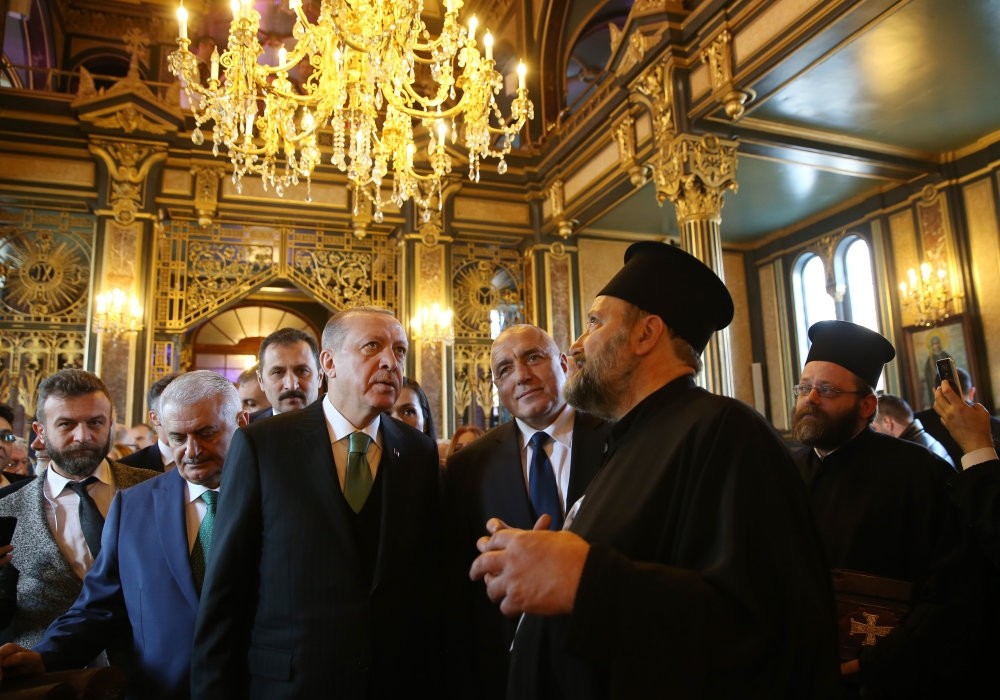 President Erdou011fan visits the historical Sveti Stefan Church of the Bulgarian community in Istanbul during its reopening ceremony after a long restoration process, Jan. 8.
by Daily Sabah Aug 02, 2018 12:00 am

U.S. aims to defame Turkey's religious tolerance over the Brunson case by manipulating the underlining reasons behind the pastor's detention

Turkey-U.S. relations relapsed as the latter aimed to distort reality by claiming that the American pastor, Andrew Brunson, was detained in Turkey due to his religious activities, in an aim to malign religious tolerance in the country, despite the pastor being accused of spying for terrorist groups. Turkey has not had problems with religious minorities in the country, President Recep Tayyip Erdoğan said yesterday on the issue. "Turkey has no problems related to [religious] minorities. Threatening language of the U.S. evangelist, Zionist mentality is unacceptable," Erdoğan told journalists in Parliament. "We will continue on the path we believe in, without the slightest concession to our freedom, sovereignty or judicial independence," he added. Last week, U.S. Vice President Mike Pence, a well-known evangelical, asked "believers across America" to pray for the pastor Andrew Brunson, who was put under house arrest and charged with "dividing and separating" the majority-Muslim country as he spread his Christian faith, implying that having a different religion than the majority of Turkey caused him to be jailed in the country. "To President Erdoğan and the Turkish government, I have a message on behalf of the president of the United States of America: Release Pastor Andrew Brunson now or be prepared to face the consequences," Pence said.

Evangelical Christians have long lobbied for Washington to exert pressure on Ankara to secure Brunson's release and Trump's decision to greenlight sanctions shows the risks he is willing to take in order to avoid displeasing the evangelicals.

Anti-American sentiment is already on the rise in Turkey, and surveys after the 2016 coup attempt show that it links to Washington's reluctance to hand over Gülenist Terror Group (FETÖ) leader Fetullah Gülen.

In addition to Pence's statements, the U.S. department of State's recently published International Religious Freedom Report for 2017 also attacks Turkey with exaggerated and manipulated accusations. The report claims that Turkey continues to limit the rights of non-Muslim minorities.

Besides, the report further claims that the religious minorities in Turkey said they continue to experience difficulties obtaining exemptions from mandatory religion classes in public schools, operating or opening houses of worship, and in addressing land and property disputes.

However, as a response to both Pence's implications and the report, representatives of every non-Muslim community in Turkey issued a joint declaration on Tuesday denying allegations of "pressure" on their communities.

"As religious representatives of ancient communities of different faiths who have been settled in our country for centuries, we freely practice our faith and perform our prayers. Any allegation claiming and/or implying that there is pressure is baseless and deliberate," the declaration said, referring to what representatives of the faiths cited as "recent political remarks claiming restrictions and pressure on people of different faiths.

"Problems rooted in the past have been resolved over time, and we are consulting with agencies of our state on matters related to subjects we need to improve on. Our discussions are based on mutual good will and a will for a solution," the declaration added.

In the past decade, Turkey has moved to reinstate the rights of minorities and help their survival as their numbers have dwindled over time. Long treated as second-class citizens, the Greek, Jewish, Armenian and Syriac communities have praised the efforts of the return of their rights, though they have complained about it being a slow process. Actions such as the controversial wealth tax imposed in 1942 that targeted rich non-Muslims, a pogrom in 1955 and the deportation of non-Muslim Turkish citizens in 1964 have added to "a fear of the state" among non-Muslim minorities in the past and forced a large number of people to leave the country.

The declaration did not specify any allegation, but a recent report by the U.S. State Department on religious freedoms painted a grim picture for Turkey's non-Muslim minorities by claiming violations of religious freedoms. Turkey has slammed the report and a Foreign Ministry spokesman said in May that it was "a repetition of certain baseless [yet] repeatedly made claims."

The latest statement on the issue came from the U.S. State Department spokesperson Heather Nauert , who demanded the immediate release of the pastor on Tuesday, while warning Turkey about the seriousness of possible sanctions.

As a response to Nauert, Erdoğan said that the threatening language of the United States will not benefit anyone.

Erdoğan said Turkey would not make compromises regarding the independence of the judiciary.

He also said his Foreign Minister Mevlüt Çavuşoğlu, would hold talks with U.S. Secretary of State Michael Pompeo on the sidelines of an ASEAN meeting in Singapore.

Brunson, who was previously jailed for his links to FETÖ and the PKK, was released and put under house arrest on July 25 following an appeal by his lawyer who objected to his extended detention in an earlier hearing, citing health problems the 50-year-old defendant suffers from.

Brunson, a Christian pastor from North Carolina who has lived in Turkey for more than two decades, was indicted on charges of helping FETÖ, which is responsible for the failed 2016 coup, as well as supporting the PKK terrorist organization.

The case of Brunson, who was a pastor at the Diriliş (Resurrection) Protestant Church in Izmir, has been a thorny issue between Turkey and the U.S.

Washington has repeatedly called for the release of Brunson, claiming he was "unjustly detained."