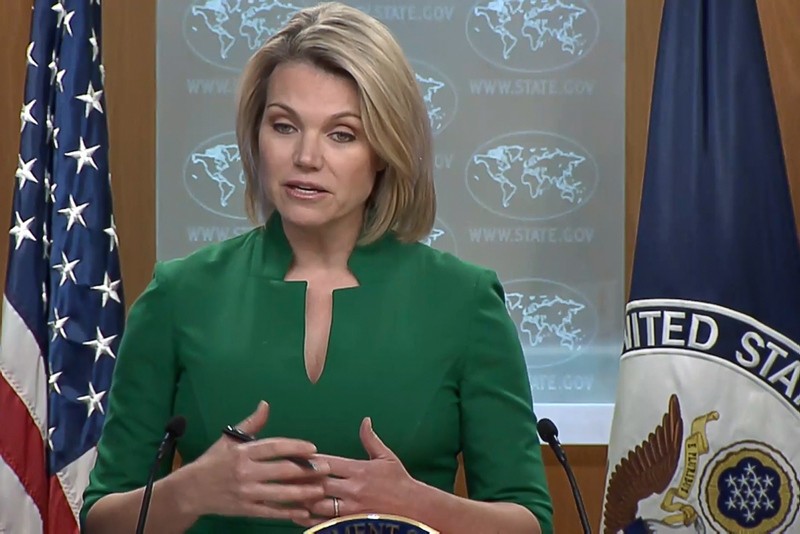 The recent phone call between Foreign Minister Mevlüt Çavuşoğlu and his U.S. counterpart Mike Pompeo is an important sign for diplomatic relations with Turkey, State Department spokesperson Heather Nauert said late Tuesday as tension between the two countries continues to escalate over the arrest of an American pastor linked to terrorist groups.

"The fact that they had a conversation definitely will not cause any harm," she said. "That's why we trust the importance of dialogue."

Answering a question on whether Turkey and the U.S. had reached an agreement, she said that Pastor Andrew Craig Brunson "would already be home" if there was such a deal, adding that they are striving hard to bring the cleric back.

Brunson was arrested after a secret witness in a criminal probe into the Gülenist Terror Group (FETÖ) testified against him. At the time of his arrest, authorities were preparing to deport Brunson and his wife Norine Lyn for "actions threatening national security."

Using a threatening rhetoric, Washington has repeatedly called for the release of Brunson, while Ankara has reiterated that Brunson's case is being handled by the courts and the government cannot intervene. Brunson is scheduled to appear before a court in October for his third hearing after the court rejected an appeal for his release in a July 18 hearing.

The relations between the two NATO allies deteriorated to an unprecedented extent after Washington decided to impose sanctions on Interior Minister Süleyman Soylu and Justice Minister Abdulhamit Gül over the detention of the terror-linked pastor, and Ankara called on their counterparts in the U.S. to come to their senses as they deemed the decision illogical and have been trying to solve the matter through diplomatic channels.

Following the U.S. sanctions, President Recep Tayyip Erdoğan announced that Turkey also decided to freeze the assets of the U.S. justice and interior secretaries in Turkey in retaliation.