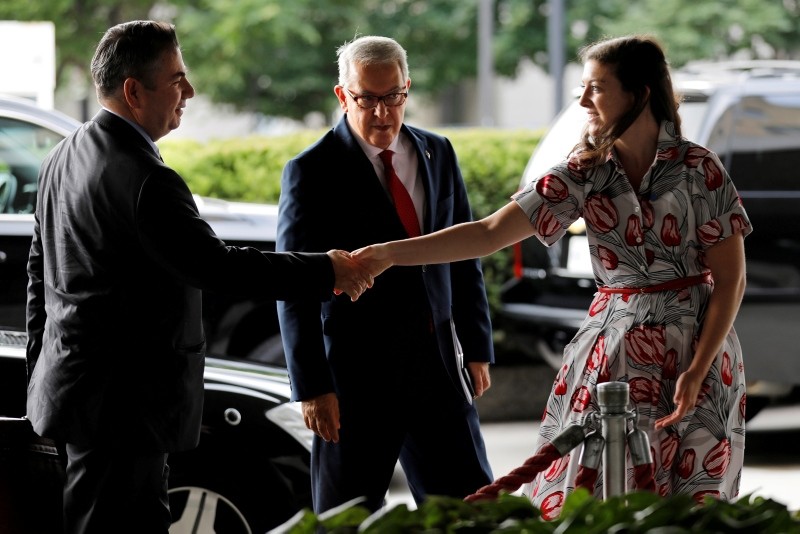 The first meeting between a Turkish delegation and U.S. officials was held in Washington in an effort to ease tensions between the two NATO allies

Talks to resolve issues between Ankara and Washington ended Tuesday at the U.S. State Department with both parties agreeing to hold additional talks.

Deputy Foreign Minister Sedat Önal headed a nine-person delegation during the meeting with Deputy Secretary of State John Sullivan which lasted 50 minutes. The Turkish delegation is composed of representatives from the ministries of foreign affairs, justice and finance.

The meeting, held at 11 a.m. local time, was the first face-to-face diplomatic effort to solve the ongoing crisis between the two countries.

An official statement made by the U.S. State Department said that Önal and Sullivan "discussed a range of bilateral matters including Pastor Brunson."

At a briefing Tuesday, Nauert also confirmed that Foreign Minister Mevlüt Çavuşoğlu and U.S. Secretary of State Mike Pompeo talked over the phone on Monday but said the two sides had not reached an agreement on Brunson's release.

Nauert added that the recent phone call between the two was an important sign for diplomatic relations with Turkey. "The fact that they had a conversation definitely will not cause any harm," she said. "That's why we trust the importance of dialogue."

Replying to a question on whether Turkey and the U.S. had reached an agreement, she said that Brunson "would already be home" if there was such a deal, adding that they are striving hard to bring the cleric back.

The Turkish delegation left for Washington on Tuesday evening after a preliminary understanding was reached between Ankara and Washington to solve the issue of reciprocal sanctions. The two historic NATO allies have recently witnessed serious disagreements in bilateral ties but agreed to continue discussions earlier this week. The nine-member delegation, with three members each from the justice, finance and foreign ministries, will meet several U.S. officials in Washington.

Önal, who is leading the delegation as the newly appointed deputy foreign mniister, was a former Foreign Ministry deputy undersecretary and also led the Turkish delegation at meetings on March 8 and 9 addressing the situation in Syria and the northern town of Manbij. Ankara and Washington have faced a period of crises since the Barack Obama administration, including the disagreement over the U.S.' support of the PKK terrorist group's Syrian affiliate, the People's Protection Units (YPG), Washington's lack of support for Ankara's sensitivities toward the Gülenist Terror Group (FETÖ) and Turkey's demand for the extradition of the U.S.-based FETÖ leader, Fetullah Gülen, who has lived in the country since 1999.

For Ankara, Gülen is the mastermind behind the failed July 15, 2016 coup attempt. Despite providing a lot of evidence linking Gülen to the failed coup, Washington has not met Ankara's demands yet. Turkey says Washington has turned it into a political issue rather than treating it as a judicial matter.

Brunson, who was previously jailed for his links to Gülenist Terror Group (FETÖ) and the PKK, was released from prison and move to a house arrest on July 25, following an appeal by his lawyer. Brunson's lawyer objected to the 50-year-olds extended detention in an earlier hearing, citing health issues.

Ankara called on their counterparts in the U.S. to come to their senses as they deemed the decision illogical and have been trying to solve the matter through diplomatic channels.

According to sources, however, both U.S. and Turkish officials have reiterated their willingness to develop diplomatic relations and resolve problems, further expressing mutual appreciation for upholding diplomatic dialogue and a constructive attitude.

Using threatening rhetoric, Washington has repeatedly called for the release of Brunson, while Ankara has reiterated that Brunson's case is being handled by the courts and the government cannot intervene.

Akar and Mattis discussed defense, the situation in Syria and the fight against terrorism, the source, who spoke on condition of anonymity due to restrictions on talking to the media, said.