Threatening Turkey will not yield results, Ankara open to diplomacy, president tells US 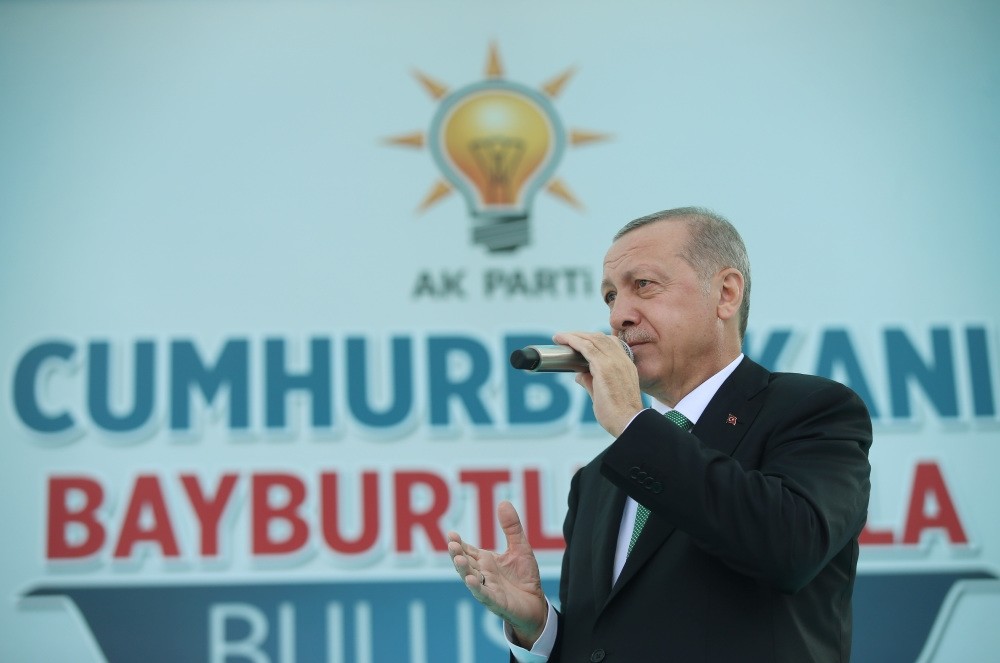 Ankara would work with any country if their interests are aligned and is open to discussion to improve bilateral ties, Erdoğan said

Turkey is open to discuss all differences with the U.S. as long as it acts rationally, said President Recep Tayyip Erdoğan on Friday in the northeastern province of Bayburt. In response to the recent row between the two powers, the president stressed that any move that would threaten Turkey's sovereignty is not up for negotiations.

Erdoğan stated, however, that any moves threatening Turkey's sovereignty are not up for negotiations.

"We have no enmity toward any country. We cooperate with all countries when interests align, and try to find a solution when there are matters of disagreements," Erdoğan said.

The Turkish president's remarks come amid recent tensions between Ankara and Washington over the detainment of American pastor Andrew Brunson.

The U.S. administration has requested Turkey, Washington's historic NATO ally, to immediately release Brunson, who was detained and later released, over alleged charges related to the PKK terrorist group and the Gülenist Terror Group (FETÖ).

Turkish officials have taken steps to overcome the strained relations with the U.S., most recently sending a delegation to Washington on Wednesday, yet the issue has not been resolved due to U.S. insistence on interfering in Turkey's judicial process. On Thursday, a nine-person Turkish delegation, led by Turkish Deputy Foreign Minister Sedat Önal, held talks with U.S. counterparts.

The U.S. State Department Spokesperson Heather Nauert said in a press conference on Thursday that the U.S. made it clear that Brunson needs to be returned home during the visit of Turkish delegation. The delegation held talks with officials from the U.S. State and Treasury departments in an attempt to resolve issues between the two countries.

"[We have ]... a very broad relationship with Turkey and a host of issues that we talk about with the Turkish government whenever we do meet. Yesterday, we had a wide-ranging conversation with Turkish government officials. Much of this though, we're not going to negotiate in public," said Nauert.

"I would say we would define progress as Pastor Brunson being brought home," she added.

Turkish experts told Daily Sabah that the American side's demand for the immediate release of pastor Andrew Brunson before any progress is blatant contempt for the Turkish judiciary and rule of law.

Many pundits suggest that the White House's aggressive and immediate demand over pastor Andrew is related to U.S. President Donald Trump's need for domestic political support ahead of midterm elections in November. The Turkish government rejects the immediate release and has told Washington to respect the judicial process in Turkey.

Relations between the two countries hit rock bottom when Washington decided to impose sanctions on Interior Minister Süleyman Soylu and Justice Minister Abdulhamit Gül over Turkey's detention of Brunson. The American pastor, who was previously jailed for his links to FETÖ and the PKK, was released from prison and moved to house arrest on July 25, following an appeal by his lawyer. Brunson's lawyer objected to the extended detention of the 50-year-old in an earlier hearing, citing health issues.

The aggressive pressure from Washington also had a negative effect on the dollar/lira exchange rate, with the rate on Friday reaching 6.35, while it stood at 5.55 on Thursday evening. Erdoğan said the pressure on Turkey was to weaken the country through an economic war, and urged citizens to put their trust in the lira.

"We also have measures to guard against all negative possibilities," he added.

Erdoğan described the weakening of the lira as "waves of artificial financial instability." He added that the situation Turkey is being subjected to ignores its economic strength, as it faces "not a single problem" in macroeconomic data, producing power or in its banking system.

Meanwhile, the opposition Good Party (İP) Chairwoman Meral Akşener said on Friday in Ankara that her party stands with the government against all threats and is ready to support the government.

"Some countries have an attitude of siding with coup plotters and terrorists when it comes to Turkey. They do not recognize any rights or laws. Our recent economic troubles show another aspect of their twisted attitudes," Erdoğan continued his criticism to the U.S. in northeastern Turkey's Gümüşhane province.

"It is quite obvious that the reasons behind these attacks [on the Turkish economy] are not due to simple differences in opinions, as it is claimed," he said, adding that despite the attacks the Turkish economy will continue to grow in 2018. He underlined that such attitudes have caused unrepairable damages to bilateral relations.

"Those who think they can make us bow down in front of them are purely mistaken," Erdoğan added.

"This nation will not take one step under threats, punishments or sanctions," the president said. Following the U.S. sanctions, Turkey announced, in retaliation, that it would also freeze the assets of U.S. Attorney General Jeff Sessions and U.S. Secretary of the Interior Ryan Zinke. An article published in the Financial Times on Thursday suggested that the U.S. side told Turkish officials that Ankara "had until Wednesday next week to release Mr. Brunson," citing experts. A similar report of the Wall Street Journal on Wednesday claimed that the U.S. demand for the release of Brunson scuttled the talks.

The two countries have faced a period of crises since the Barack Obama administration, including disagreements over U.S. support for the PKK terrorist group's Syrian affiliate, the People's Protection Units (YPG), Washington's lack of support for Ankara's sensitivities toward FETÖ and Turkey's demand for the extradition of the U.S.-based FETÖ leader, Fetullah Gülen, who has lived in the country since 1999.