Turkey has received global support for its stance against the US: FM Çavuşoğlu 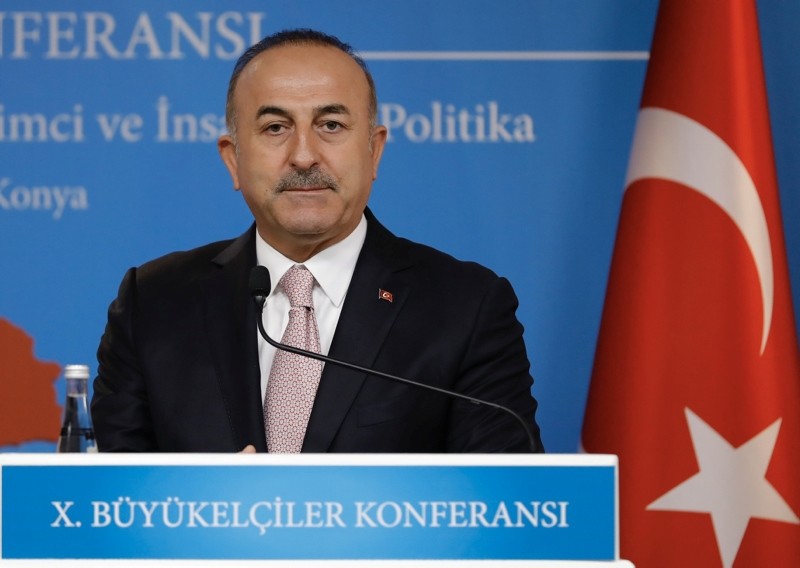 Amid its deteriorating tensions with the U.S., Turkey has gotten huge support from across the world, Turkey's foreign minister said on Wednesday.

"These events have opened the eyes of the world," Mevlüt Çavuşoğlu told a joint press conference with his Sudanese counterpart Al-Dirdiri Mohamed Ahmed at the 10th Ambassadors' Conference in the capital Ankara.

Çavuşoğlu said that the international community saw the U.S.' "disrespectful attitude towards all countries" since the present administration came to office.

He added that it is also internationally known that the U.S. would use its economic power "roughly" against other countries.

"So everyone is looking for a way to get out of the dollar," he said.

Çavuşoğlu stressed that Turkey will continue its "upright stance."

"We will continue our efforts to resolve present problems through diplomatic means...But we will not give into pressure or imposition," he said referring ongoing tension between Ankara and Washington.

As they have learned from their experiences, Turkish authorities are taking measures to reform the economy, he said and added that the measures taken have already relieved the markets.

Mentioning Turkey's worldwide humanitarian supports, Çavuşoğlu stressed that Turkey has used its power in favor of humanity and its friends and that other countries took note.

Turkey is the "world's most generous country" in terms of foreign aid, he said, adding that oppressed people worldwide noticed this and prayed for Turkey's strong economy.

Çavuşoğlu also highlighted that the EU and countries which have economic ties with Turkey favor a strong Turkish economy.

On the detention of American pastor Andrew Brunson, Çavuşoğlu said that the U.S. and other countries should not only consider their own disappointment but also others'.

Telling how the U.S. supplied large number of arms to the YPG/PKK, a terrorist group near Turkey's borders, he said those arms are now being sold on the open market.

Stating that if there is a crime, everyone needs to be subjected to the judicial process, Çavuşoğlu said Turkey wants to solve all issues through negotiations and dialogue, not pressure and impositions.

"But there is a serious confusion," he added, referring to the U.S. trying to apply pressure on Turkey.

On U.S. moves to ban sales of F-35 fighter jets to Turkey, Çavuşoğlu said: "This has no practical meaning. Turkey has already taken delivery of two of them." He explained that Turkish pilots are now training with the jets in the U.S. for two years.

A U.S. defense spending law signed this week includes a measure prohibiting F-35 sales to Turkey until the Pentagon issues a report on Turkish-U.S. relations in 90 days.

Turkey has been in the F-35 program since 1999. The Turkish defense industry has taken an active role in their production, including Alp Aviation, AYESAŞ, Kale Aviation, Kale Pratt & Whitney, and Turkish Aerospace Industries making parts for the first F-35 fighter jet.

Turkey plans to purchase 100 F-35 fighter jets in the years to come.

"So there is no suspension," Çavuşoğlu said, adding that the restrictions on delivery of the jets are a domestic issue of the U.S.

He added that the U.S. using such matters to pressure other countries hurts its standing and prestige.

"No country is without alternatives, not desperate, and every country has its honor...They need to respect this."