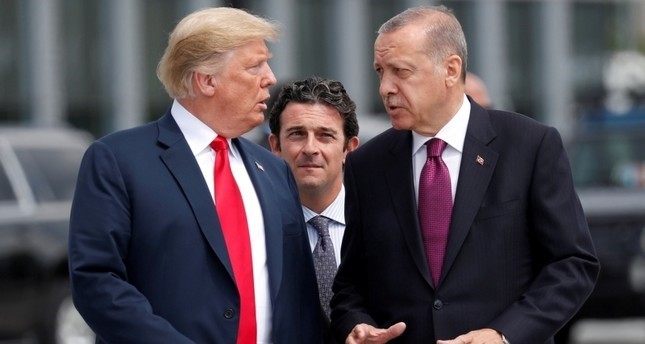 Turkey is committed to being an ally of NATO and U.S. President Donald Trump's tariffs are hurting this alliance, Foreign Minister Mevlüt Çavuşoğlu said in an opinion piece published in USA Today on Monday.

"The sanctions imposed, while intended to impact the Turkish economy, will damage the interests of American and European businesses along the way," he also said, warning that Trump's decision could have a much bigger impact.

"Aiming to undermine an ally's economy to score domestic political points is deeply misguided. Alienating an ally with which your country shares vital national interests is self-defeating," the top diplomat said in the piece.

However, he praised Trump's earlier calls on NATO members to step up their defense spending.

Mentioning Turkey's contributions to the alliance, Çavuşoğlu said that Trump was right in that regard and Turkey was committed to reaching NATO's official target for its members to spend on defense.

"The target, however, is only a 'guideline,' and just a handful of NATO members have moved toward meeting it. By contrast, Turkey has committed to reaching this goal by 2024, and our spending on military equipment is already above the NATO guideline of 20%. We also are one of the oldest and most strategically located members of NATO — serving as guardian of the alliance's southern flank and providing its second largest military force," he added, touching upon Turkey's significance in the alliance.

Underlining that such sanctions will only "disrupt the atmosphere of cooperation," Çavuşoğlu emphasized that countries should be strengthening their ties instead of pushing each other away during such hard times.

Also mentioning Turkey's efforts to help Syrian refugees, the top diplomat reminded that the country is already hosting the largest number of refugees.

"As a high-ranking State Department official recently told Congress, Turkey has suffered more casualties from terrorism in the past several years than any other Ally and hosts 3.5 million Syrian refugees."

Acknowledging that Daesh had been dealt a major blow in the Middle East, Çavuşoğlu reminded that the terror group remained a global threat.

He also drew attention to Turkey's efforts to eradicate terror and said the country has been at the forefront of the fight against Daesh in the past years.

"Every day, Turkish security officials go door to door hunting down Daesh militants who seek to slip into Europe from Syria via Turkey. Over the past two years, we have arrested hundreds of suspected Daesh members, helping to prevent the group's spread to Western capitals. In the face of this threat, Turkey has been the tip of the spear."

Saying that Incirlik Air Base in southern Adana province is home to American soldiers, he also emphasized that the troops in the base are crucial in the fight. "Meanwhile, Turkey's Incirlik Air Base hosts American troops who are serving on the front lines of the fight against Daesh. It has been a critical staging ground, putting allied forces hours closer than other bases in the region and has made a substantial difference in the ability to successfully root out Daesh."

In his final words in the piece, Çavuşoğlu said that the recent tensions in Turkey - U.S. bilateral relations needed to thaw.

"This reckless escalation needs to stop. The U.S. and Turkey may have divergent views on significant issues, but we strategically align on a wide range of others," he said, adding "For everyone's sake, we should address our disagreements with diplomacy, rather than threats and provocation, and with a commitment to facts and perspective."