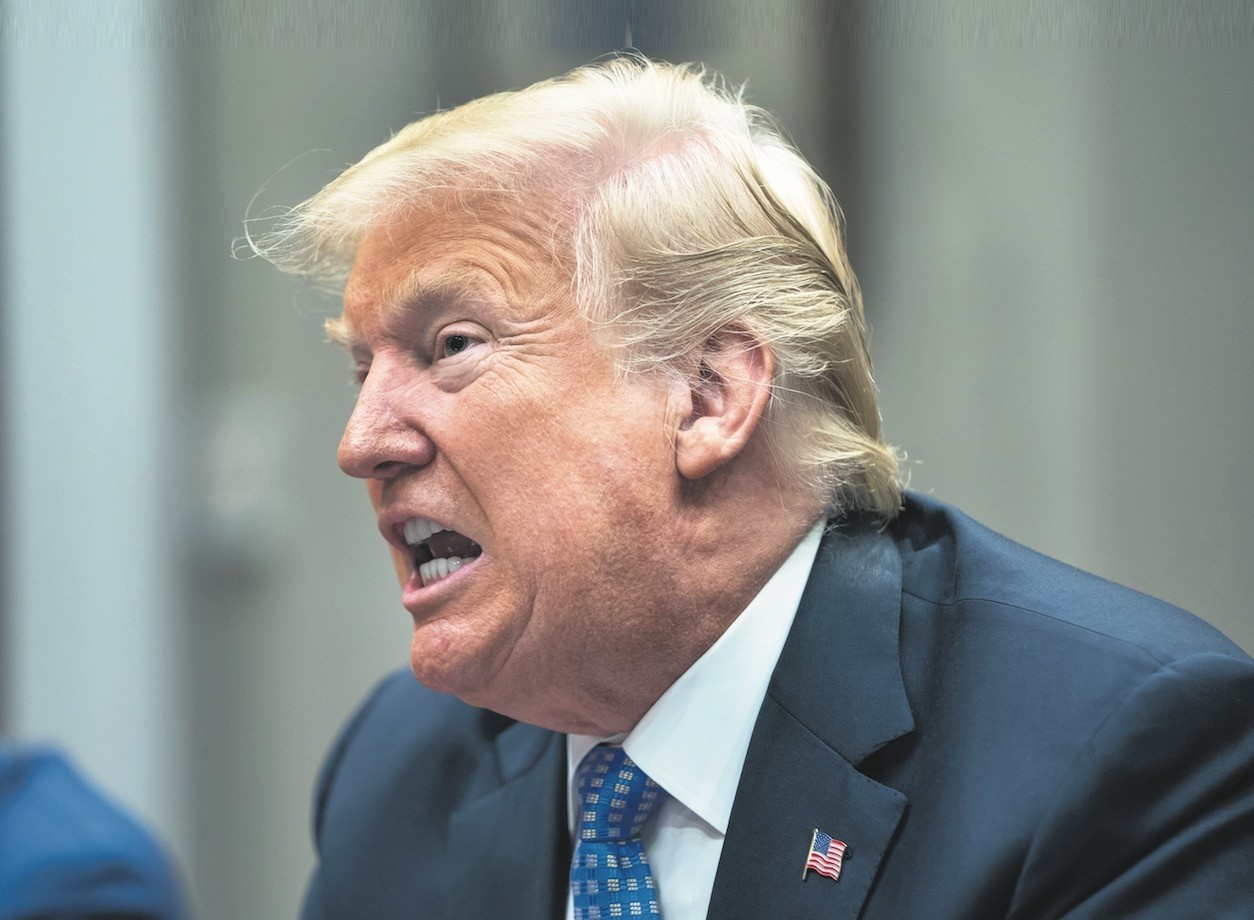 U.S. President Donald Trump speaks with lawmakers during a roundtable discussion on the Foreign Investment Risk Review Modernization Act in the Roosevelt Room of the White House, Washington, Aug. 23.
by Nur Özkan Erbay Aug 25, 2018 12:00 am

The recent row between Ankara and Washington over American pastor Brunson is not the sole source of crisis in bilateral ties, but rather is a symptom of the U.S. creating tensions in relations whenever Turkey pursues independent policies

Turkish-U.S. relations have witnessed ups and downs over the last half a century. Whenever Ankara showed signs of rejecting policies the U.S. aimed to pursue, the latter opted to use various impositions over the country to constrain its freedom of maneuver in both domestic and foreign policy. Despite all the crises and sanctions from Johnson's letter to today, Turkey has not stepped back from its position. On June 5, 1964, the letter written by U.S. President Lyndon B. Johnson to then-Prime Minister İsmet İnönü indicated that he had been informed of a planned military operation by Turkey on Cyprus and had concerns over the issue. In his letter, Johnson demanded Turkey consult the U.S., otherwise he would call NATO and the United Nations Security Council for an emergency meeting.

İnönü responded to the letter with this sentence: "If there is no other way around, a new world will be founded, and Turkey will find itself a place in this new world." The answer given to Johnson's letter in 1964 remains the same in 2018. Yet, relations between the two countries had never become this tense according to experts. Assessing the current tension, Beril Dedeoğlu, a professor at Galatasaray University and Turkey's former minister of European affairs, said that divergence over issues became more apparent between the two countries, especially in the last couple years.

"The U.S. has been using various pretexts to prevail upon Turkey to adhere to American policies, such as delivery of F-35s, Brunson's release and so on," she said.

While elaborating on the generally accepted fact, "The Brunson Crisis is not the real matter of the crisis," Dedeoğlu said and added that the Trump administrations' current policy towards Turkey is a clear example of "brinkmanship."

Ups and downs in bilateral relations

Turkey-U.S. relations have always had ups and downs since the first contact in 1805 during the Ottoman Era. Nevertheless, the tension has never been as serious as today," said Uluç Özülker, retired ambassador and professor at İstanbul Ticaret University.

Ten years later, after the Johnson Letter and the Cuban Missile Crisis, another crisis erupted on the ground when Turkey restarted opium cultivation. Turkey's decision to re-cultivate opium, after 3 years of the complete ban imposed in 1971, aggravated relations with Washington.

In 1974, the U.S. once again imposed an arms embargo on Turkey due to the Cyprus Operation. In response, Turkey suspended American use of the İncirlik airbase in southern Adana province and other bases within its borders. The Turkish Armed Forces (TSK) were granted authority to control these bases.

Another crisis knocked on the door of both countries in 2003. The two countries were severely at odds over the decision by the George W. Bush administration to invade Iraq in 2003 following the ‪‪Sept. 11 attacks. A proposal that included sending Turkish troops to foreign soil and deployment of foreign armed forces on Turkish soil did not pass in Parliament.

The refusal of the proposal aroused reactions both from the U.S. Army and from the U.S. Congress. On July 4, 2003, America raided a Turkish Special Forces Command safe house in Sulaymaniyah. Even though the U.S. apologized to Turkey later, the incident damaged Turkey-American relations severely.

In recent years, especially right after the Gülenist Terror Group (FETÖ) carried out the July 15, 2016 coup attempt and ongoing U.S. support to PKK-affiliated groups in Syria, Washington's steps have created a serious crisis of trust among the Turkish state apparatus and Turkish society.

Despite constant calls by President Recep Tayyip Erdoğan on Washington to extradite the FETÖ leader, Fetullah Gülen, Ankara's demand has not been met by U.S. authorities. Indeed, the U.S. ignored all the evidence concerning FETÖ and its leader, who has been residing in the U.S. since 1999.

Following the July 15 investigations, pastor Andrew Brunson, an American citizen, was detained in December 2016, on charges related to links with the PKK and FETÖ terrorist groups.

In response to that arrest, the U.S. indefinitely suspended visa services in Turkey on Oct. 8, 2017. In the same way, Turkey retaliated with same action and suspended visa applications in the U.S. accordingly.

Meanwhile, the Trump administration has been making various calls on Turkey to release Brunson and U.S. embassy workers who were charged for crimes linked to assisting terror organizations in Turkey.

In response to Turkey's rejection of Brunson's release, Washington decided to impose sanctions on the Turkish interior and justice ministers.

"The pastor is not the real matter here," said Dedeoğlu, adding, "If he is released, there will be another pretext unless we agree upon fundamental issues with the U.S."

Meanwhile, Özülker said that Brunson plays an important role for Trump due to the upcoming November mid-term elections in the U.S.

"Trump is concerned for the upcoming elections, and there are around 50 to 60 million evangelicals in the U.S. Therefore, he played his cards for Brunson to attract votes for for his friends in church," Özülker said.

Following the sanctions on the ministers, economic sanctions were introduced to attempt to coerce Turkey into making a decision on a matter of the Turkish judiciary.

Özülker also said the U.S. is at the same time having troubles with the EU, Russia, China and other countries due to reckless and belligerent decisions by President Trump.

"Yes, the U.S. turned against its old allies and has strained relations with numerous countries. But the effect of the U.S. moves and sanctions affected us more compared to the others due to our fragility. Diplomacy could ease the tensions; yet, we witnessed what happened to the Turkish committee sent to the U.S. Even if Trump is removed from office with charges of impeachment, it seems that the relationship between the two countries is damaged irreparably," he said.