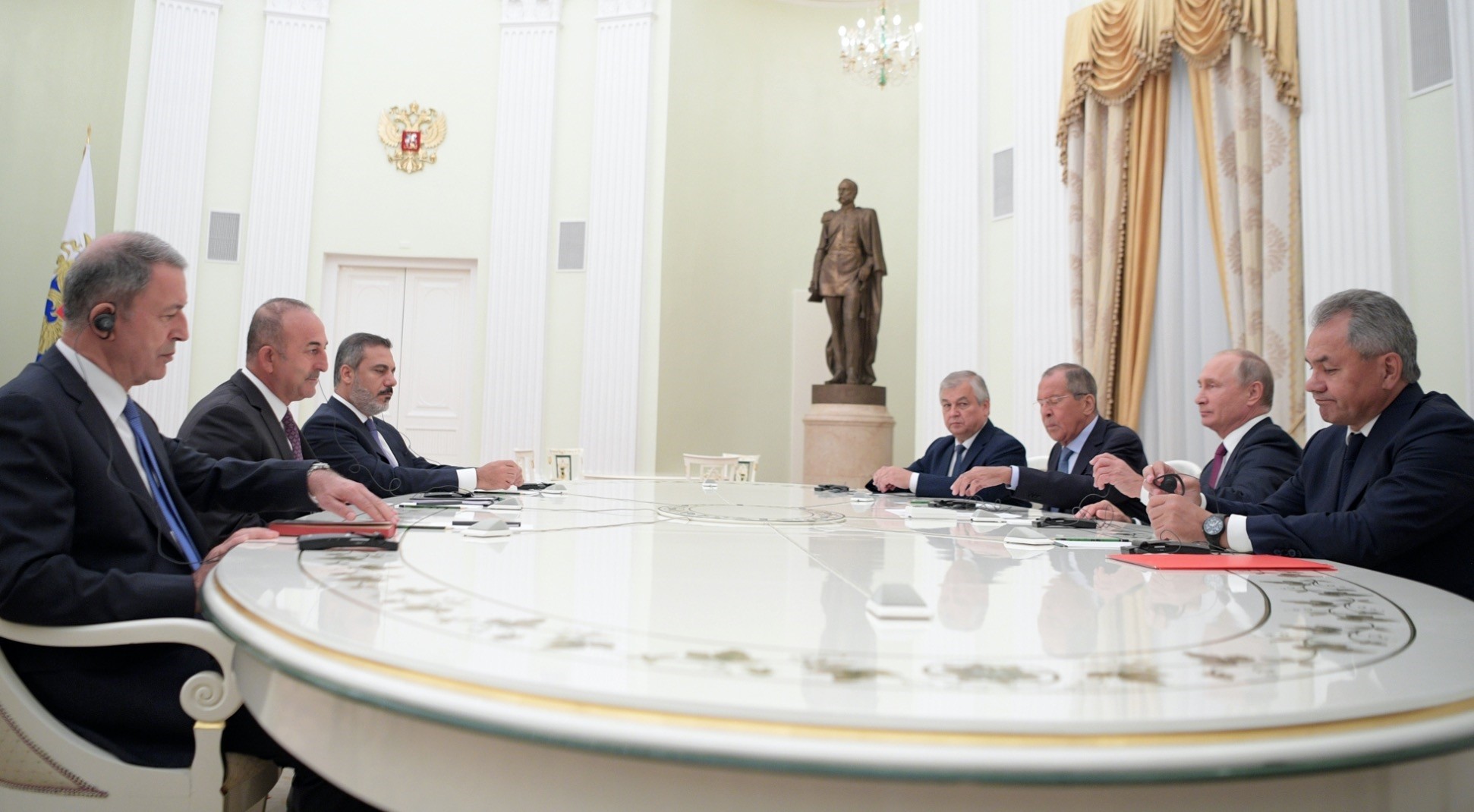 The developing cooperation between Turkey and Russia can become multidimensional with joint initiatives in many areas and personal diplomacy between the leaders of the two countries. Foreign Minister Mevlüt Çavuşoğlu, Defense Minister Hulusi Akar, and the head of Turkey's National Intelligence Organization (MIT) Hakan Fidan traveled to Moscow Friday for talks on bilateral and regional issues, including the recent developments in Syria. They met Russian Foreign Minister Sergey Lavrov and President Vladimir Putin. Before meeting the Turkish delegation, Putin said Friday that Russia's relations with Turkey were deepening and their cooperation in regional issues and the economy was increasing.

The Russian president also praised the Russian and Turkish efforts in Syria, saying that a solution was closer to the input of Iran, the European Union, the U.N. and the U.S.

In an effort to restore calm in the region and improve the humanitarian situation in war-torn Syria, the three guarantor states Turkey, Iran and Russia, launched the Astana process on Jan. 23, 2017, establishing de-escalation zones.

Intense diplomatic traffic in the visit

Before meeting Putin, Çavuşoğlu met Lavrov earlier in the day, while Akar and Fidan met with Shoygu. Fidan and Akar were also in Moscow last week where they met Russian officials and the defense minister.

Following Turkey's shooting down of a Russian military jet over the Turkey-Syria border in November 2015, Russia imposed a range of unilateral sanctions on Turkey, including a ban on food imports and an end to visa-free travel. After quick a recovery in bilateral relations, the two countries rapidly increased military and economic cooperation.

During the recent meeting, Lavrov announced that Russia and Turkey have agreed to establish a mechanism to restore a visa-free regime between the two countries. "Russia is ready to lift visa restrictions for the Turkish holders of special and service passports as well as for drivers engaged in cargo transportation between the two countries," Lavrov told reporters after his meeting with Çavuşoğlu.

Çavuşoğlu conveyed President Recep Tayyip Erdoğan's greetings to Putin, saying that the Turkish president was eager to host him in Istanbul in the near future. "You already had accepted an invitation to visit a seafood restaurant [in Istanbul]," Çavuşoğlu said. Putin also mentioned the regular contacts with Erdoğan.

During the BRICS meeting in Johannesburg, South Africa in July, Russian media reported that Putin requested Erdoğan to allow the import of Russian meat. Soon after the meeting, the first batch of meat from Russia was delivered to Turkey.

"We will both improve bilateral relations between the two countries for [providing] stability and economic development in the region and we will boost our cooperation on regional matters," he said.

He said, without giving any particular name, that some countries and individuals were jealous of Turkey and Russia's close cooperation and friendship.