Turkey addresses own defense needs in absence of support from allies 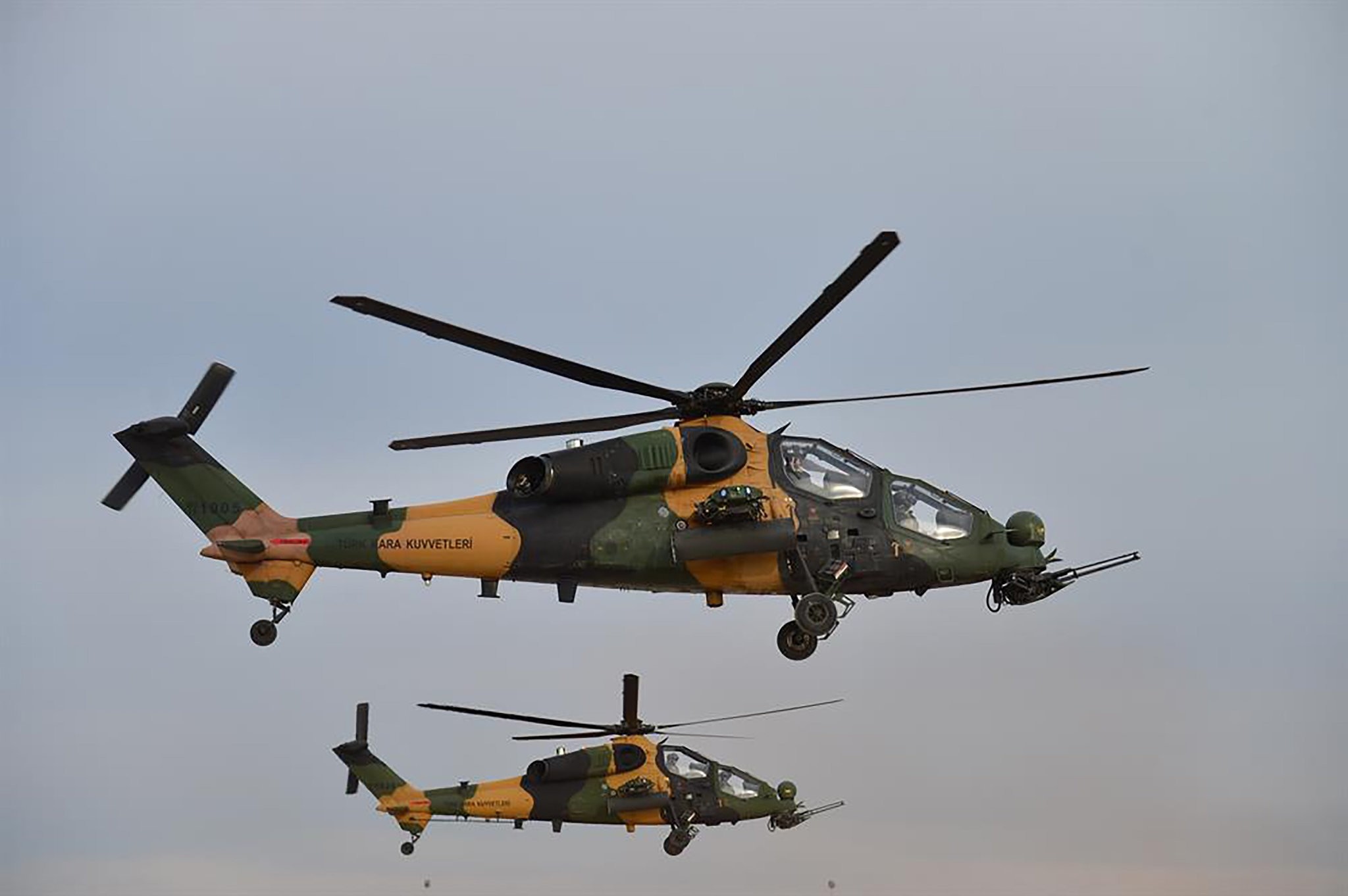 ATAK helicopters, one of the most remarkable products of Turkeyu2019s defense industry, have paved the way for increased exports.
by Yunus Paksoy Aug 27, 2018 12:00 am

Weapons embargoes by its NATO allies, particularly the U.S., have pushed Turkey to search for alternatives and develop an indigenous defense industry

It was in the 1970s when Turkey painfully came to realize that an indigenous defense industry is vital for authority in the international arena. An American arms embargo placed on Turkey following the peace operation on the island of Cyprus forced the then economically fragile country to produce its own. It was not a success story in the following decades after the incident though. Turkey has had to resort to NATO for various reasons for protection. In most cases, the defense pact has never been close to being a reliable ally.

Over the course of the last years, however, Turkey has been pursuing an indigenous defense industry policy under President Recep Tayyip Erdoğan. Today, approximately 70 percent of the equipment at the disposal of the Turkish army is domestically made. The development is seen as remarkable yet not sufficient.

Missile defense systems, for example, are a headache for the country. Since the early 1990s, Turkey has been vulnerable to missile attacks. For years, the Turkish government has been seeking to meet that need. At this point, things took an unprecedented turn. Having not received the green light from the United States, Turkey turned toward Russia for the S-400 missile defense systems.

It was a crucial breakthrough in the decades-long Turkish-NATO ties. While the United States reacts in fury, for Turkey it is just filling a growing gap. Turan Oğuz, a prominent defense expert, is of the opinion that Ankara took such a step for not trusting the West.

"It is not a technical but a political step. The technical aspect is small. Turkey wants to determine its own fate because it does not trust the allies," he said. "We cannot abandon the Western system altogether. No one from the presidency or other officials say that. Turkey is meeting a need. There is no technology transfer. It is closing a 30-year gap."

Arda Mevlütoğlu, another well-known defense expert, differs. Mevlütoğlu argues that even though politicians speak of an urgent need, he does not predict that the S-400 systems would do the trick. "It will not have the ability to defend the country against ballistics. It is being purchased for air defense against airplanes; it will be a limited effect. It is not very satisfying for me."

The main problem with the S-400 system for Ankara seems to be the NATO issue. Since Ankara cannot integrate the Russian-made system with NATO radar, the Turkish government will have to find a way to effectively protect the country against high-tech missiles.

Despite the gloomy atmosphere regarding the incapability of the S-400 system when it comes to cruise and ballistic missiles without specific radar systems, it is worth underscoring that the purchase of the S-400 system is, indeed, a vital move to diversify Turkey's options and be aware of threats to some extent.

Moreover, the Turkish government has not solely turned its gaze to Russia or farther East. Turkish companies and Eurosam will work together to produce SAMP/T Aster 30 long-range surface-to-air missile (SAM) systems, which are already in use in several NATO member countries. The SAMP/T Aster 30 system uses a network of sophisticated radars and sensors, including 3D phased array radar, enabling it to be highly effective against all types of air threats. The system can intercept missiles with a 600-kilometer range and can operate in standalone mode or integrated in a coordinated network, such as NATO's missiles defense system. In short, Turkey seeks to close the gap by shaking hands with Russia, while it continues the collaboration with the West.

Oğuz said Turkey has been through a series of steps. "We realized we had to do it ourselves after the 1970s. It started with the organizations established with the money of the people not the state. But you cannot do it yourself in the beginning. There are purchases from outside at first. Then, production under a single license with others is the next stage. Having done that, Turkey learned to produce something on its own. ATAK helicopters, for example, are a good instance," he said, adding that the next step for Turkey is producing uniquely on its own.

Another controversial side of the discussion in regards to the purchase of the S-400 system is whether Turkey is shifting toward Russia. Both experts are of opinion that one can rule out the possibility for the foreseeable future.

"Well, it is hard yet not impossible. It would be an expensive and difficult process. It would take a very radical decision to do so," Mevlütoğlu said as Oğuz said that Turkey has always been militarily West-oriented for decades.

Nowadays, Turkey finds itself in a position where it is faced with embargoes by NATO allies due to political reasons as the country wages a war against several terrorist organizations both at home and in Syria and Iraq. While the West blocks arms sales, it tells Ankara to not look for alternatives at the same time, which is considered as unacceptable by the Turkish government.

"Recently, some of the NATO allies are putting up serious resistance to giving Turkey defense systems, including simple weapons that we need. I need to build an air defense system. But I cannot buy it from my allies. Then I have to get it from somewhere else. I have an urgent need," Foreign Minister Mevlüt Çavuşoğlu said late in 2017.

As far as the new mentality of the Turkish government is concerned, it will seek as many alliances throughout the world as possible in the area of the defense industry to meet its needs without being reliant on one unpredictable superpower.