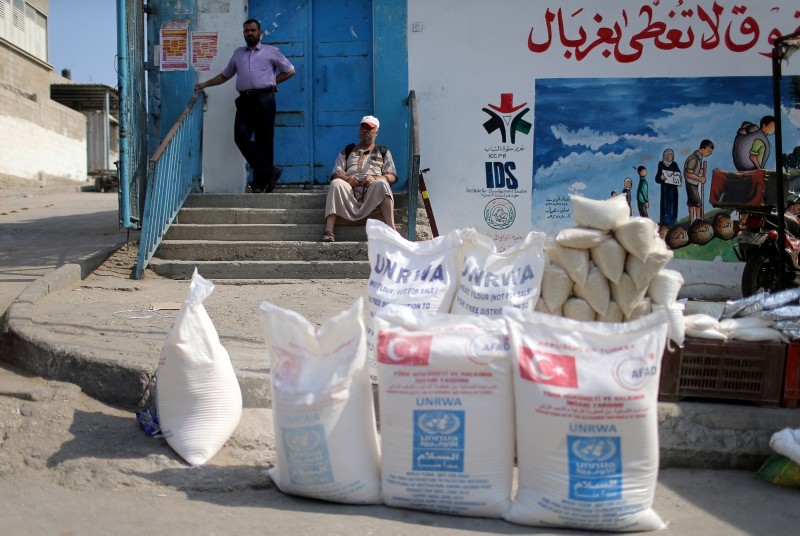 A Palestinian man sits outside an aid distribution center run by United Nations Relief and Works Agency (UNRWA) in Khan Younis in the southern Gaza Strip September 1, 2018. (Reuters Photo)
by Compiled from Wire Services Sep 01, 2018 12:00 am

Turkish Foreign Ministry on Saturday condemned the U.S. over its decision to end funding for the UN Palestine refugee agency.

"The decision of the United States will affect the lives of over 5 million Palestinians in a negative way. At the same time, this decision will harm the vision of finding a two-state solution to the Palestinian issue; regional peace and stability," the ministry said in a statement.

The statement came a day after U.S. State Department spokeswoman Heather Nauert said Washington "will no longer commit further funding" to the UN Relief and Works Agency for Palestine Refugees in the Near East (UNRWA). Nauert said that UNRWA's business model and fiscal practices were an "irredeemably flawed operation" and that the agency's "endlessly and exponentially expanding community of entitled beneficiaries is simply unsustainable."

The ministry said the U.S. decision was a "major disappointment".

"Under these circumstances, UNRWA's continuing uninterrupted operation has become a legitimacy test and a conscientious task in terms of the international community," it added.

Turkey will discuss the issue in detail during UN General Assembly High Level meeting in New York, on Sept. 27, with the co-chairmanship of Jordan, Japan, Sweden and the EU, and participation of UN Secretary-General and UNRWA General Commissioner, the statement said.

The ministry said Turkey is determined to continue to make every effort to support UNRWA and is in solidarity with the Palestinian people.

Later on Saturday, Turkey's ruling Justice and Development Party (AK PARTY) spokesman Ömer Çelik also criticized the U.S. decision in a series of tweets, saying it was "the worst decision" and lacks conscience.

Çelik said that the decision would provoke chaos and worsen the situation both in the region and in the world.

"Every step that blocks a fair solution to the Palestine issue affects the whole world. Unfortunately, with this decision the U.S. supports is not the solution, rather discord," he added.

Çelik called on the world to be in solidarity against this "unfair" decision and said "the best answer would be increasing financial aid to UNRWA".

UNRWA rejected the criticisms, with spokesman Chris Gunness describing it as "a force for regional stability."

Speaking in Jordan, where more than 2 million registered Palestinian refugees live, including 370,000 in ten refugee camps, Gunness said: "It is a deeply regrettable decision...some of the most disadvantaged, marginalized and vulnerable people on this planet are likely to suffer."

Gunness said UNRWA provides health clinics, schooling for 526,000 refugee children across Jordan, Syria, Lebanon, Gaza and the West Bank, including East Jerusalem, and food assistance to 1.7 million people - a million of them in Gaza. The agency will now ask existing donors for more money, and seek new sources of income.

"Our funding gap is $217 million ... so although we have opened up our schools just this week we have made it clear that we only have money until the end of September," he said.

Established in 1949, UNRWA provides critical aid to more than 5 million Palestinian refugees in the Gaza Strip, the Israeli-occupied West Bank, Jordan, Lebanon, and Syria. Most are descendants of the roughly 700,000 Palestinians who were driven out of their homes or fled the fighting in the 1948 war that led to Israel's creation.

The U.S. was by far UNRWA's largest funder, giving $350 million annually, or about one-quarter of the agency's budget. It slashed funding earlier this year, paying out only $60 million of a first installment in January, and withholding $65 million. It had promised $365 million for the whole year. Washington said the agency needed to make unspecified reforms and called on the Palestinians to renew peace talks with Israel.

The last Palestinian-Israeli peace talks collapsed in 2014, partly because of Israel's opposition to an attempted unity pact between the Fatah and Hamas Palestinian factions and to Israeli settlement building on occupied land that Palestinians seek for a state.

There was no immediate comment from the Israeli government to the decision by U.S. President Donald Trump's administration, which was issued during the Jewish sabbath. But it was welcomed by some Israelis.

Israeli opposition lawmaker Yair Lapid said on Twitter: "Aside from providing cover to terror, UNRWA is responsible for the fact that the 750,000 people they registered originally (most of whom have since died) became 5.5 million fake refugees. UNRWA lost sight of its purpose long ago." Earlier this year Israeli Prime Minister Benjamin Netanyahu urged action against UNRWA.

"We already have great-great-grandchildren of refugees who are not refugees," he said in January. "I suggest a gradual conversion of all funds going to UNRWA to other agencies to deal with the question of refugees."

On Friday, before the U.S. decision was confirmed, the head of the international U.N. refugee agency UNHCR, Filippo Grandi, was asked by reporters in Beirut if his agency could assume UNRWA's role. "The Palestinian refugees in the region are the responsibility of UNRWA," he said, making no further comment.

The UNRWA move is the latest in a number of actions by the Trump administration that have alienated the Palestinians, including the recognition of Jerusalem as Israel's capital and the decision to move the U.S. Embassy from Tel Aviv to Jerusalem.

That move was a reversal of longtime U.S. policy and led Palestinian leadership to boycott the Washington peace efforts led by Jared Kushner, Trump's senior adviser and son-in-law.

Palestinian chief negotiator Saeb Erekat on Saturday accused Washington of implementing the agenda of "Israeli extremists who have done nothing but to destroy the prospect of peace between Palestinians and Israelis."

Speaking in Ramallah, he said: "The United States may have the right to say that we don't want to give taxpayers' money, but who gave the U.S. the right to approve the stealing of my land, my future, my aspirations, my capital, my Aqsa Mosque, my Holy Sepulchre Church?"

"The Palestinian refugees are already the victims who have lost their homes, livelihoods and security as a result of the creation of the state of Israel," she said.

"Once again, they are being victimised by the U.S. administration in support of Israel's decades-long military occupation and impunity."

In Jalazone refugee camp near Ramallah in the Israeli-occupied West Bank, Ayoub Abeidi, whose family once lived in what is now the city of Lod in Israel, said the decision was political.

"Trump wants to finish off UNRWA so he can terminate the right of refugees (to return)," said Abeidi, 53. "Our right to return exists and neither Trump nor anybody else can cancel it."

Successive Israeli governments have ruled out any right of return, fearing the country would lose its Jewish majority.

In Gaza, Nashat Abu El-Oun, a refugee and father of eight, told Reuters: "The situation is bad and it will become worse...People can hardly afford living these days and if they became unable to earn their living they will begin thinking of unlawful things."

In the impoverished Gaza Strip, most children learn in UNRWA schools and the U.S. decision has raised fears for their future education.

"If they stop the aid completely it would have a major effect on our children," said Abu Mohammed Huweila, 40, from the Jabalia camp in northern Gaza in remarks to AFP.

Huweila, whose nine children have all attended UNRWA, called the move "an unjust decision" that went against their right to education.

"If they stop aid to schools, this means destroying the futures of a large number of students and throwing them into the street," he said.

"I do not think that it can eliminate our Palestinian cause. It is a just cause. If the aid is stopped, the Palestinian struggle will continue."

Jordan, which is one of just two Arab countries to have signed a peace treaty with Israel, already announced plans to organize an emergency fund-raising conference on the sidelines of the UN General Assembly in New York next month.

Foreign Minister Ayman Safadi said the September 27 event aimed to secure alternative funding and "reaffirm that UNRWA is an organization created by the UN General Assembly, with a clear and particular role, and this role must continue".

State Department spokeswoman Heather Nauert said the US would "intensify dialogue with the United Nations, host governments and international stakeholders about new models and new approaches" for assisting needy Palestinians.

But Hugh Lovatt, Israel Palestine analyst at the European Council for Foreign Relations, said Washington would find scant support for its push for an alternative aid conduit.

He said it was an attempt to "unilaterally take the Palestinian right of return off the table".

"But U.S. actions are misguided, dangerous, and won't work," he said, since "neither Lebanon or Jordan can be expected to play along."