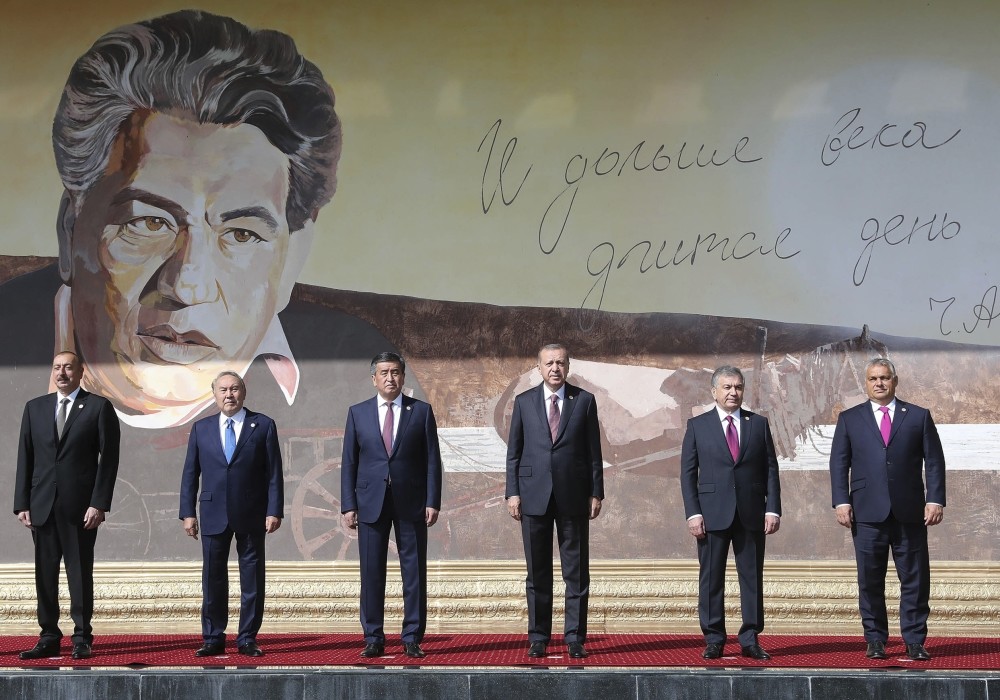 Azerbaijanu2019s Aliyev, Kazakhstanu2019s Nazarbayev, Kyrgyzstanu2019s Jeenbekov, President Erdou011fan, Uzbekistanu2019s Mirziyoyev and Hungaryu2019s Orban pose for a photo in front of a portrait of Chingiz Aytmatov, a Kyrgyz author and diplomat
by Daily Sabah Sep 04, 2018 12:00 am

The leaders of the Turkic Council, a group of Turkish-speaking states, have called for increasing cooperationand solidarity in the face of international challenges and for action to build a common future together

The leaders of the Turkic Council, an international organization of Turkish-speaking countries, highlighted yesterday the importance of cooperation among member states in the international arena during the sixth summit of the Turkic Council in the eastern resort town of Cholpon-Ata in Kyrgyzstan. "The cooperation and support we display among ourselves will also contribute to the functioning of the international system in just manner," President Recep Tayyip Erdoğan said during the summit, underlining the significance of this cooperation.

The Turkish president said that "some states have been resorting to threats and pressure, while disregarding international principles and agreements, instead of using diplomacy, dialogue and multilateralism." Azerbaijan's President Ilham Aliyev highlighted the solidarity of member states in the international arena. He said the international community has been facing new risks, threats and conflicts which are being triggered each day and added, "I believe that we should take further steps on mutual support in the international agencies." As the host president, Kyrgyz President Sooronbay Jeenbekov said during the opening speech that the summit plays a crucial role in elevating the centuries-old friendship between states to a higher level.

Erdoğan also said the Turkic Council was also "a symbol of a common ideal," which he said was the "desire and the will to build a future together," and added that it was a necessary to strengthen cooperation to face challenges and reach desired prosperity.

Erdoğan arrived in Bishkek, Kyrgyzstan, on Saturday with a Turkish delegation, where a number of bilateral agreements have also been signed. During his three-day visit to the country, Erdoğan also drew attention to the threat of the Gülenist Terror Group (FETÖ), which is also active in Kyrgyzstan. Erdoğan said recent events proved Turkey and its friends shouldn't delay fighting against the group. FETÖ carried out the July 15, 2016 coup attempt in Turkey, where 250 people were killed and at least 2,200 were injured.

The 6th summit was hosted by Kyrgyzstan's President Sooronbay Jeenbekov and attended by the presidents of Turkey, Azerbaijan, Kazakhstan and Uzbekistan, and Hungary also attended the summit as observer states."I believe that the summit of the Turkic Council, built on common history, culture and language, will elevate the century-old friendship [of the Turkish] world to a new level and open a new page," the Kyrgyz president said.

He also added it was important for the Council that Uzbekistan's intention to join as a member, saying, "This step would positively affect the enlargement of the Turkic Council and increase its international influence," he added. Uzbekistan had participated as an honorary status in the summit, while Hungary attended as an observer country. Jeenbekov said the Council is also open to Turkmenistan if the country is willing to join as a member.

The Kyrgyz president added that the Council's members were also interested in further developing economic relations.

"This is a great advantage," the Kazakh president said. Nazarbayev also proposed projects to introduce the Turkic heritage to the international community, and strengthen ties among the future generations of the member states. Uzbekistan President Shavkat Mirziyoyev said his country supported enhancing bilateral cooperation within the Council and that his country was ready to contribute to the activities of the Turkic Council.

In 2000, Uzbekistan attended a summit of Turkic speaking states held in Azerbaijan on the presidential level. The next year, the country attended the summit on the parliament speaker level.

The country did not attend the summit in 2006 in Turkey, and none the following years. The country was not included in the formation of the Turkic Council in 2009.

President Recep Tayyip Erdoğan and Mirziyoyev's mutual visits to their countries have improved ties between the two countries. Erdoğan's initiative has played an important role for Uzbekistan's return to the council. During a visit by Erdoğan earlier this year to the Uzbek capital Tashkent, Mirziyoyev announced that he will join the council.

Hungarian Prime Minister Victor Orban attended the summit as an observer country. He said during his remarks that although the language is Hungarian and they have a different religion than the Turkic countries, his country is standing on Kipchak-Turks' principles. He expressed that Hungary was ready to establish strategic cooperation with countries in the council.